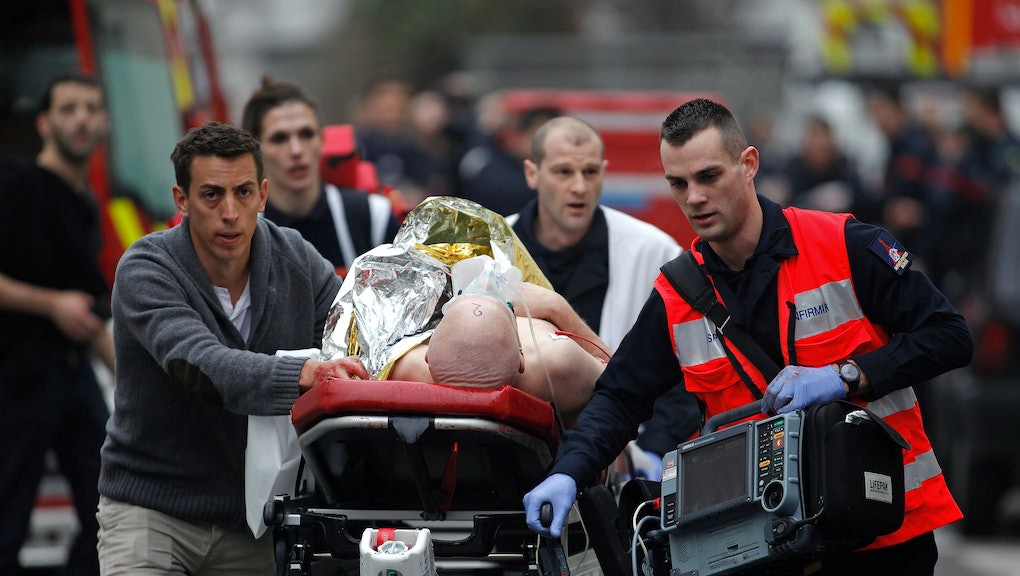 In the aftermath of a killing spree that left 12 dead Wednesday at the Paris headquarters of satirical magazine Charlie Hebdo, people across the globe are reacting with shock, sadness and disgust that murder continues to be used as a tool to highlight ideological points.

Of course, when those ideological points are tied to radical Islam, the political and cultural repercussions of such a tragedy too often turn to gross generalizations and Islamophobia. One tweet from social media consultant and activist Iyad El-Baghdadi captures the moment in all its tragedy and troubling implications:

Reuters reports that the gunmen, both of whom remain at large, were heard on video shouting, "We have killed Charlie Hebdo. We have avenged the Prophet Muhammad," leading observers to believe they acted as part of a religious vendetta against the magazine. Charlie Hebdo is known for printing irreverent — and to many Muslims, deeply offensive — cartoons about Islam's foremost prophet.

The publication's headquarters was also subject to a firebomb attack in 2011, according to the Washington Post.

El-Baghdadi is one man, and his words should only be taken to express his own personal views. But they also speak to something larger: Not only are they a powerful rejection of those who use religion to justify violence, they're a reminder that this attack in no way reflects the values of the vast majority of Muslims worldwide.

It's sad that he needs to remind people of this. But considering what many see as a "rising tide of Islamophobia" in France and elsewhere, the danger that a shooting like this could also spur an uptick in anti-Muslim sentiment — possibly even policy shifts — is real and troubling.

Daniel Trilling at the New Humanist sums it up perfectly:

Amidst the horror and tragedy of this massacre, it's important that we refuse to let it breed more hate, xenophobia and violence. That's exactly what the gunmen would have wanted.