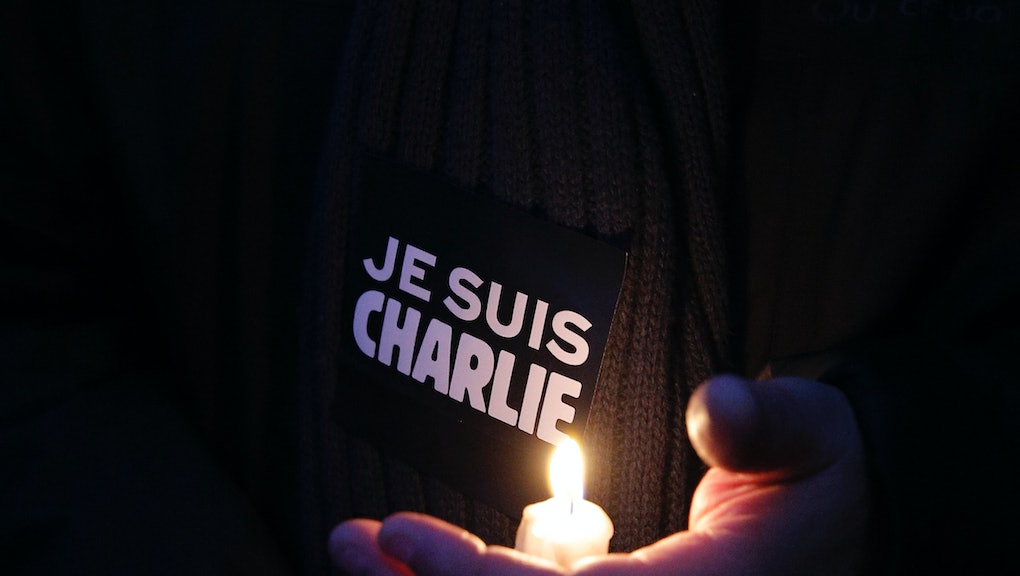 In the wake of Wednesday's attack on French satirical magazine Charlie Hebdo, which claimed 12 lives, including 10 journalists and two police officers, supporters have come out in droves to stand in solidarity with the magazine. From ordinary citizens to prominent politicians, the overwhelming message has been one of support for Charlie Hebdo and condemnation for the attack on free speech and freedom of the press.

Now, three prominent French news outlets — including Le Monde, one of the most widely respected newspapers in the world — have also offered an enormous show of support for the magazine: They're helping Charlie Hebdo to continue publishing and fulfilling its role as an advocate for satire and free expression.

Here's a rough translation of the statement, courtesy of Mic CEO (and surprise French-speaker) Chris Altchek:

"Facing horror, Radio France, Le Monde and France Televisions will support Charlie Hebdo and its team to allow that Charlie Hebdo continues to live on.

The letter adds that it will provide money and staff to the magazine in order to ensure that it continues production. It's signed by Mathieu Gallet, Louis Dreyfus and Rémy Pfimlin, the heads of each of the organizations.

Why this matters: While many people across the world have vocalized their support for Charlie Hebdo, these outlets are going a step further and offering tangible forms of aid.

But it's all the more meaningful because the attack on Charlie Hebdo was an attack on the press and its ability to carry out its work without interference. This attack by masked gunmen wasn't simply about exacting vengeance on a publication known for its often-crude satire of religious figures; it was an attack on the principles of a free press and exchange of ideas that are essential to any functioning civil society.

For other prominent news outlets to make such a strong case for advocacy emphasizes the point that an attack on one part of the press is an attack on *all* forms of press.

Other outlets, like Agence France-Presse, have also shown solidarity:

While some outlets are bowing to pressure and censoring the cartoons that got Charlie Hebdo in trouble initially, others, at least, are doing it right. It's crucial that press freedoms remain intact, even in the face of senseless violence.