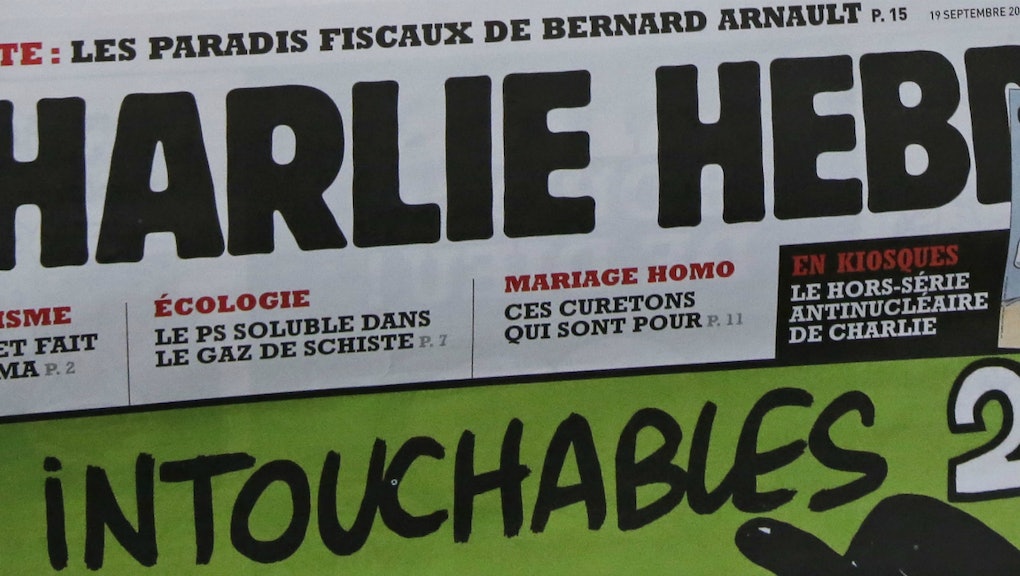 Why Every Newspaper Should Reprint the Controversial 'Charlie Hebdo' Cartoons

As journalists, talking heads and observers around the world try to make sense of the horror, including who the attackers were, where they came from, whether they were connected to al-Qaida or the Islamic State or another outpost of Islamic extremism, one thing is clear: The murderers acted to silence and intimidate not just the voices of Charlie Hebdo's cartoonists but those of free people everywhere.

Our response should be unified and robust. While outlets like CNN, the Telegraph and the New York Post continue to display pixelated versions of the cartoons in question, every newspaper in every country that values free speech should reprint these cartoons in their original form.

There are plenty of strong, persuasive arguments that the editorial content of Charlie Hebdo's pages deserves more scrutiny than the aftermath of a gruesome tragedy will afford. The magazine's depictions of Muhammad and other religious figures have been considered deeply offensive by thousands, and it's worth considering the political and social fallout of these cartoons regardless of their right to be published.

As Richard Seymour writes in Jacobin: "I think there's a critical difference between solidarity with the journalists who were attacked, refusing to concede anything to the idea that journalists are somehow 'legitimate targets,' and solidarity with what is frankly a racist publication."

But free speech is perhaps our most fundamental right, underpinning and creating the marketplace of ideas and debate that enables a free people to argue and deliberate on the issues of the day. It's essential not only for functioning democracies, but for any nation that wants to have a civil society. For this reason, it is often attacked violently by those who fear its impact or fail to understand its importance and necessity.

U.S. Supreme Court Justice Louis Brandeis famously wrote that the remedy to hateful or inciting speech is "more speech, not enforced silence" and that fear "cannot alone justify suppression of free speech and assembly. Men feared witches and burnt women. It is the function of speech to free men from the bondage of irrational fears."

This isn't to say the U.S. hasn't had a complicated history with free speech. President John Adams signed the now-infamous Alien and Sedition Acts that restricted speech critical of the federal government and authorized the president to jail and deport individuals deemed "dangerous to the peace and safety of the United States." Throughout the early 20th century, the Supreme Court upheld numerous convictions for individuals advocating unpopular ideas or speaking critically of government action. Even as recently as the 1950s, the Supreme Court upheld convictions of individuals advocating for the overthrow of government in speeches and publications.

It is the function of speech to free men from the bondage of irrational fears.

Brandeis recognized that freedom of speech isn't merely some esoteric legal concept. Rather, it is, or at least should be, a fundamental and universal value of free people everywhere. Yes, speech can be vulgar, hateful, offensive and even sometimes incite violence among those who fear its power, but the ability to exercise one's right to speech is more important to the health and freedom of a society than perhaps any other.

The Supreme Court recognized this in the 1969 case Brandenburg v. Ohio, declaring that the government cannot punish inflammatory speech unless that speech incites "imminent lawless action."

Charlie Hebdo fought the same battle less than a decade ago in France. In 2007, then-editor Philipe Val stood trial in French court for allegedly inciting hatred against Muslims for publishing the now-famous 2005 Danish cartoon of the Prophet Muhammad with a bomb for a headdress. The court rejected the accusations, ruling that the cartoons were covered by freedom of expression, and found that the cartoons were not insulting to the Muslim community.

This court rulings didn't bring an end to the attacks against the paper, however. In November 2011, the magazine's main offices were burned to the ground after publishing a special edition, guest-edited by the Prophet Muhammad, and threatening readers with "a hundred lashes if you don't die laughing."

Charlie Hebdo's response to such violence has always been to follow Brandeis' advice: to fight back with more speech. In response to the 2011 office burning, it published a cartoon of a male cartoonist sloppily kissing a bearded Muslim man with the smoldering remnants of the publication's office in the background. The caption read "Love is stronger than hate."

The events of Wednesday remind us of the striking fact that at least 66 journalists were killed in 2014, many for daring to express unpopular or dangerous ideas, to speak truth to power and to tell the stories that powerful institutions around the world, from terror groups to transnational corporates, would rather not have told. Now more than ever is the time to stand forcefully against those who seek to silence criticism or expression through violence and terror.

As members of a world community that value the freedoms of expression and speech and oppose the brutal and primitive violence of those who fear them, we must stand with Charlie Hebdo and follow their example. Every newspaper and media outlet should proudly and prominently publish Charlie Hebdo's work, not simply because they enjoy the legal right to do so, but because they have a moral and ethical obligation to do so.

Yes, there will be members of the Muslim and international community that will be offended by these cartoons, just as Christian communities offended when the "Piss Christ" made the rounds in the late '80s or when Jewish communities complained about cartoons commenting on the Gaza conflict a few short months ago. Even more recently, one can look to the debate surrounding the censorship and eventual release of The Interview despite outside threats and pressure. The most important thing to remember in light of such complaints is that the attack that took the lives of a dozen human beings today was an attack on the freedom to express any idea, not just the ones embodied in cheeky cartoons in a French newspaper with a penchant for subversive humor.

If the world wants to take a stand against terrorism, it must do so with one voice that declares we will not be cowed or threatened by violence and fear and that we will stand for the values most fundamental to a free people — the ability to comment on, laugh at, and mock the serious issues that challenge us today and into the future. We must stand together to denounce and condemn those who would seek to silence the voices of others and show that today, we are all Charlie Hebdo and we are not afraid.