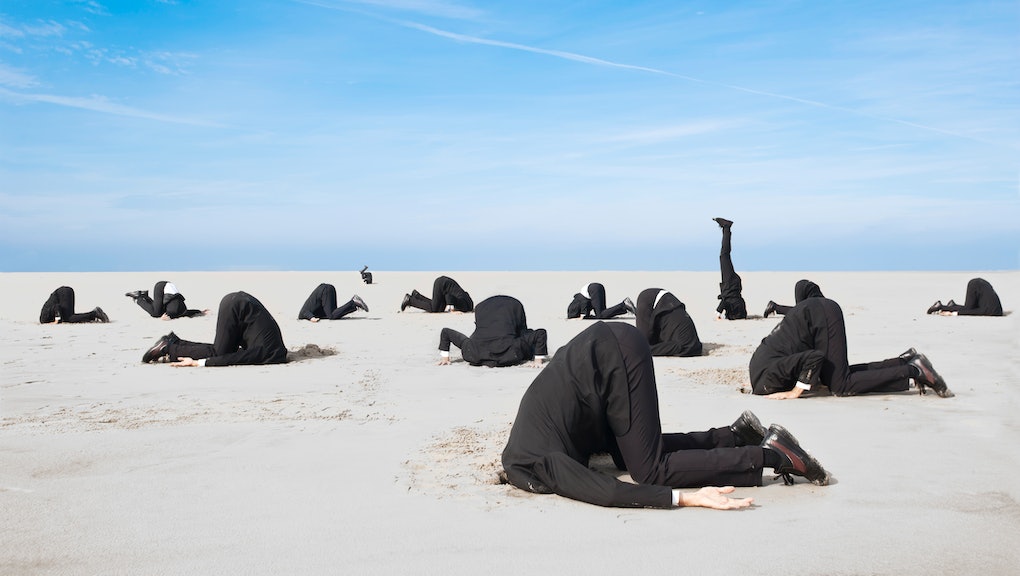 If You Can Answer These 3 Easy Questions, You Know More About Politics Than 87% of America

More than one-third of Americans cannot answer the simplest questions about current events or the basic workings of their government, according to a fun new poll.

The survey, conducted by Fairleigh Dickinson's PublicMind group, posed these three riddles to its 964 respondents:

1) Which party currently controls the House of Representatives?

Thirty-three percent of those surveyed couldn't answer a single question correctly. A little more than one-quarter — 26% and 27%, respectively — correctly answered either one or two of the questions. Only 13% managed to say something like, "Republicans, as they have for more than four years; executive, legislative and judicial branches, like I learned in grade school; and John Roberts, as he has been for the past decade," and answer all three correctly.

But it gets worse.

The poll shows that Americans aren't simply misinformed, they are actively seeking out and wallowing in misinformation.

I say Iraq, you say Iraq: More than a decade after the U.S. invasion, more than 40% of Americans quizzed said they believe weapons of mass destruction were found in Saddam Hussein's Iraq.

To be doubly clear, because it seems we must: The fictional weapons were never found. U.S. forces discovered some chemical weapons, but not the nuclear arsenal (or plans to build one) former President George W. Bush and his gang promised in selling the war to the American public. This should not come as news and it's hardly controversial. Bush himself conceded in August 2006 that "it turns out [Hussein] didn't [have WMDs], but he had the capacity to make weapons of mass destruction."

But that's almost beside the point. As we see in the survey results, Americans aren't particularly interested in pursuing the truth.

"Individuals who reported getting their news from Fox were more likely to say that the WMD program had been found, with 52% saying that it was 'probably' or 'definitely' true, and those who get their news from MSNBC were the least likely, with only 14% saying the same," said Dan Cassino, director of experimental research for Fairleigh Dickinson's PublicMind Poll.

Birthing stupid: Asked if they believed President Barack Obama is a citizen of the United States, 19% of respondents said they were "definitely" or "probably" sure that he is not. Obama released his longform birth certificate in April 2011. It confirmed what reasonable people have known for years: He was born in Hawaii in 1961.

"This belief is most prevalent among the president's opponents: Thirty-four percent of Republicans think it's likely, along with 22% of independents and just 7% of Democrats," Cassino said. Predictably, 30% of Fox News viewers — more than double the combined number of CNN or MSNBC loyalists — said they thought Obama was not a legal citizen.

Laughing? While it might be momentarily satisfying to celebrate the ignorance of your ideological foes, the fact is that the vast majority of the country doesn't seem to have a clue about how government works or, equally troubling, who exactly is running it.

Politicians, like we saw in the run-up to the Iraq war in 2003, preyed on public ignorance to launch the U.S. military into a bloody Middle Eastern quagmire. More recently, the Obama administration has seen its claims that the NSA didn't spy on ordinary Americans exposed not by a skeptical press or citizenry, but a single whistleblowing former contractor, Edward Snowden, now wanted for committing "espionage." The FBI, whose public argument that North Korea was behind the Sony cyberattack usually comes in the form of "brief and cryptic remarks with no opportunity for follow-up questions," will take comfort in a poll like this.

If Americans want political leaders to answer "the tough questions," then they should start by nailing down the simple ones for themselves.