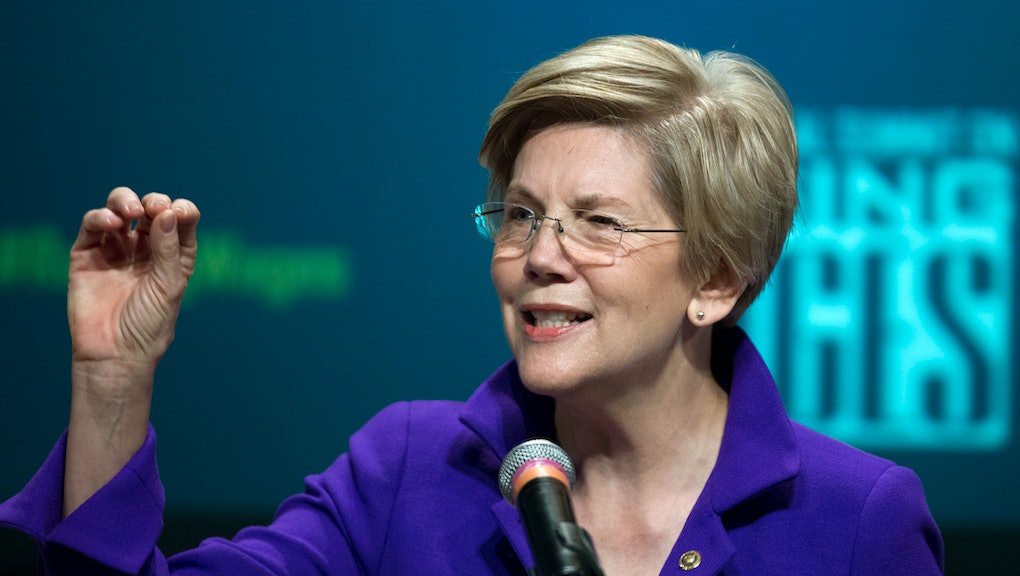 These days Sen. Elizabeth Warren's (D-Mass.) every waking moment is scrutinized for insight as to whether she'll run for president. But regardless of whether she chooses to enter the fray, she is in the midst of establishing herself as one of the most forceful analysts of the failures of the American promise in national politics.

A speech Warren gave Wednesday is yet another example of her ability to wax eloquent on ideas about political economy that no potential establishment candidate in either party is willing to touch.

"All of the new money earned in this economy over the past generation — all that growth in the GDP — went to the top."

The address: At a summit on wages sponsored by the AFL-CIO labor federation, Warren roused her audience with a sweeping indictment of trickle-down economics, the idea that relaxing taxes and regulations on corporations and the wealthy will produce gains for the economy that will find their way to ordinary workers.

Warren began by explaining the success of the post-war boom, and the globally unprecedented nature of the mid-20th-century middle class:

"Coming out of the Great Depression, America built a middle class unlike anything seen on earth," she said. "From the 1930s to the late 1970s, as GDP went up, wages went up pretty much across the board. In fact, 90% of all workers — everyone outside the top 10% — got about 70% of all the new income growth. Sure, the richest 10% gobbled up more than their share — they got 30%. But overall, as the economic pie got bigger, pretty much everyone was getting a little more."

Warren went on to illustrate how the ascendance of President Ronald Reagan, and a radical new ideology of trickle-down economics, changed things dramatically. Beginning in the early '80s, wages began to stagnate, while expenses for everything from education to health care to housing continued to rise. As the economy grew, the results in fact trickled upward.

"Since 1980, guess how much of the growth in income the 90% got? Nothing. None. Zero," she said. "In fact, it's worse than that. The average family not in the top 10% makes less money than a generation ago. So who got the increase in income over the last 32 years? One-hundred percent of it went to the top 10%. All of the new money earned in this economy over the past generation — all that growth in the GDP — went to the top. All of it."

A pox on both houses: Warren's account of the failure of free-market fundamentalism is not unique, but it is difficult to think of this sentiment coming out of the mouth of somebody who wields so much power within the Democratic Party at the moment. Sen. Bernie Sanders (I-Vt.) — the only U.S. senator who identifies as a socialist — could very well say these things and is considering a run for president, but he is purely a gadfly. The likelihood of his being elected is nil.

Warren, on the other hand, has been courted by serious party donors and received constant attention from mainstream media, and she has power within the party's leadership.

More important even than Warren's account of the failures of the Reagan era and its legacy is her willingness to think of this as a problem bigger than the Republican Party. During her speech she uses words like "structural" and points to the Democrats as complicit in the pervasiveness of trickle-down. She critiques free-trade policies and tax codes that many establishment Democrats have championed for decades.

Warren rightly reminds us that it is not some inevitability of the market but a series of public policy choices that have systematically advantaged a few at the expense of the many. Her speech didn't delve too deeply into the specific policies that would remedy this history, but she does make it clear that a political class held captive by the financial sector will neglect its citizenry, and that it is vital for the U.S. to break up its big banks in order to rebalance the republic. Warren's party would be wise to take her counsel.