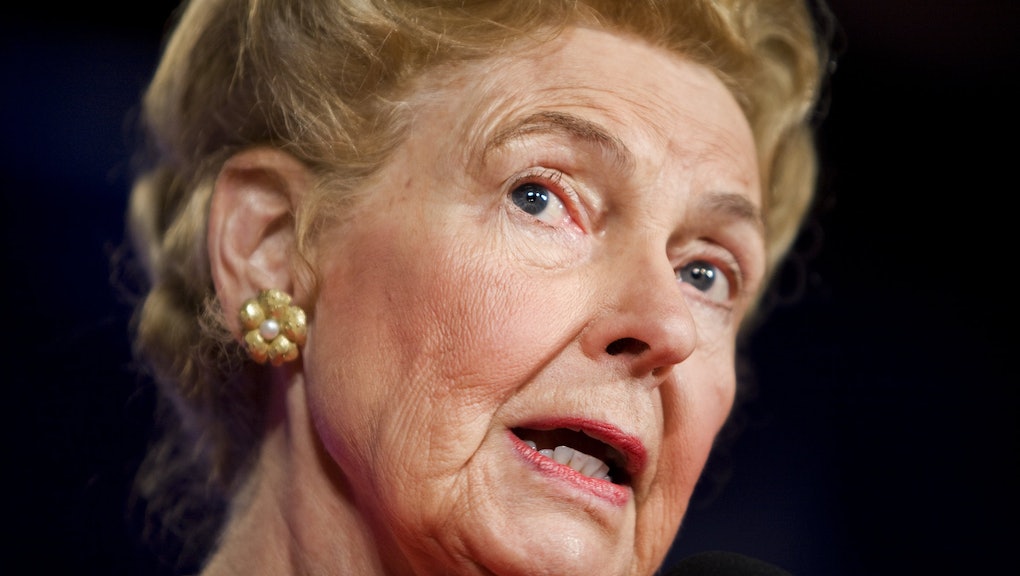 What's the problem with higher education these days? America's favorite sexist great-aunt and evangelical Eagle Forum founder Phyllis Schlafly has a very interesting theory: The problem is that all those big-brained bimbos are going to college instead of baking pies and attending church.

In a column Monday for far-right garbage dump WorldNetDaily, the bachelor's and law degree-holding Schlafly complains that the skyrocketing number of women on college campuses has distorted traditional gender norms — to disastrous effect. There are just too many women running around. Women outnumber men on college campuses now, despite the fact that, "Boys do far better on average than girls on the SAT test for mathematics, which means that boys are better prepared than girls for STEM majors in college," Schlafly says.

But that's not the only crazy notion Schlafly is peddling. There are many more "available" women on college campuses, all looking for that perfect college husband to put a ring on it. The inevitable competition for precious male seed pressures women into "more casual hookups that are dead-end encounters with no future and no real romantic relationships."

The innumerable hordes of women who don't know their proper place are also apparently responsible for their own rapes. According to Schlafly, "The imbalance of far more women than men at colleges has been a factor in the various sex scandals that have made news in the last couple of years."

Schlafly has a few solutions for this feminist assault on the ivory tower. For one, colleges could "impose the duty on admissions officers to arbitrarily admit only half women and half men." She also proposed that the government could simply stop providing any student loans whatsoever," forcing students to take jobs to pay for their tuition and eliminate time for parties, perhaps even wiping out time for fraternities and sororities." She also recommends that colleges defy Title IX and create new all-male sports teams to recruit more strapping, handsome male athletes for all these college-bound women to marry. God forbid they enter the actual workforce and take a job that belongs to a Christian man.

All of these ideas are self-evidently moronic. The implication that college women are at fault for their own rapes because they dared to rise above their God-given role as Christian baby factories is particularly reprehensible. But Schlafly also seems eager to impose punitive labor on college students to teach them that pointless toiling is its own reward, despite the fact that it is actually impossible to pay one's own way through college on a minimum-wage job these days.

After all, what are women in school for anyhow but to snag a college man?

While Schlafly's continued existence only seems to repeatedly prove that her ideas are backwards, sad, and completely irrelevant in a society that doesn't codify laws based on the Old Testament, the unfortunate reality is that she remains an influential fringe member of the right-wing establishment. Schlafly regularly speaks at gatherings like Conservative Political Action Conference and contributes to publications like National Review. Even as a historical anachronism, she remains a dangerous source of ignorance.