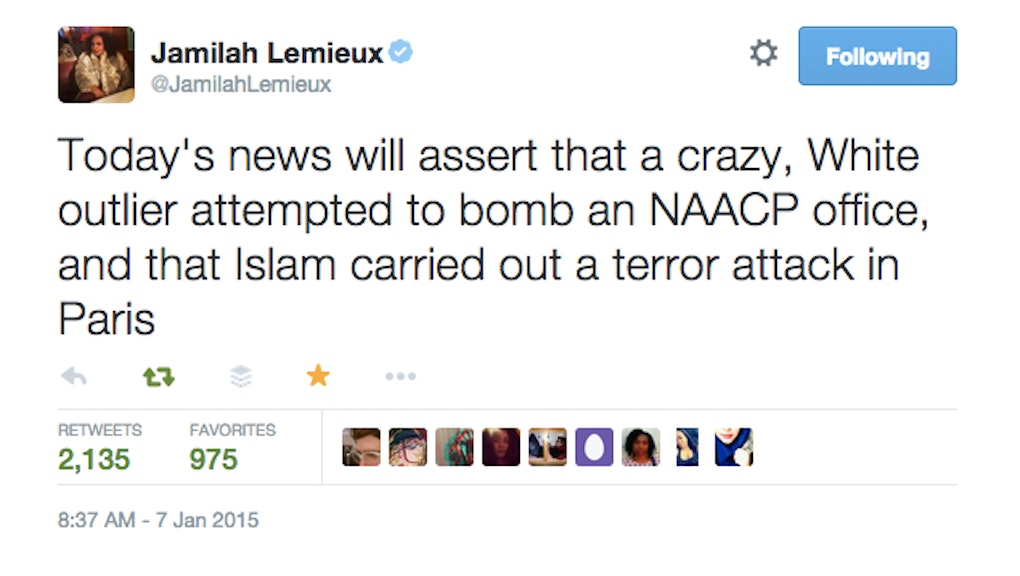 If a terrorist attack took place right here in the U.S., wouldn't it be a national story?

Terrorism may be defined as "the use of violence and threats to intimidate or coerce, especially for political purposes," but if you asked most people, the term conjures one image: brown people with beards and bombs. Nothing has made that profoundly racist misunderstanding clearer than the news coverage of two violent attacks that happened within roughly 24 hours.

On Tuesday morning, the NAACP offices in Colorado Springs, Colorado, came under attack when someone who is believed be a balding white man in his 40s dropped an explosive device that went off a few feet from the building. And on Wednesday morning, news broke of a horrifying mass shooting at satirical newspaper Charlie Hebdo in France that left 12 dead and several wounded.

Both acts were motivated by radical ideology, but only one of them is being covered by the 24-hour news cycle. What gives?

According to Ebony senior digital editor Jamilah Lemieux, it's because we rush to label attacks carried out by non-whites as "terrorism," but when the perpetrator is white, we view those cases as isolated acts of violence.

"We are comfortable with the image of Islamic terrorists, but unable to recognize the actions of Americans — white Americans, specifically — as terrorism," Lemieux told Mic. The fact that there (thankfully) were no casualties doesn't preclude us from labeling the act for what it is.

"A planned bombing at an office of one of the nation's oldest civil rights groups ... what could possibly come to mind aside from 'hate crime' and 'terrorism?'" Lemeiux said. "The lack of injuries is a miracle, not a reason to downplay the horrific implications of this crime."

There's a long list of examples that support Lemieux's claim. For instance, after a white man in Texas purposely crashed his plane into a building known to house IRS staff and left a note describing his plans for mass murder in 2010, a police chief described his acts as "a criminal act by a lone individual" rather than terrorism. When Elliot Rodger espoused his radical anti-woman ideology and killed six people near the University of California, Santa Barbara last year, newspapers like the Santa Barbara Independent , described him as a "lone gunman." And Santa Barbara County Sheriff Bill Brown said Rodger's acts were "the work of a madman."

As Brittney Cooper at Salon noted, the terms we use to describe the violent actions of men are incredibly racialized.

Ethnicity doesn't just impact the way we categorize these incidents, it also impacts whether the media covers them at all. As Daily Kos reports, it took CNN 16 hours to report what happened at the NAACP on Tuesday and "the incident wasn't mentioned on national nightly news broadcasts."

So if you heard about this attack, you should thank Black Twitter because its reporters and activists took it upon themselves to have a conversation about the attack that wasn't happen in traditional news media. As Mic's Derrick Clifton writes, it was "only after #NAACPBombing became a worldwide trending topic on Twitter did the incident start to become a national news story late Tuesday night."

The chilling violence that took place in France needs and should be all over the news. But that shouldn't take away from reporting on the terrorism that takes place here at home. Let's call a spade a spade, and finally recognize that white people can be terrorists, too.