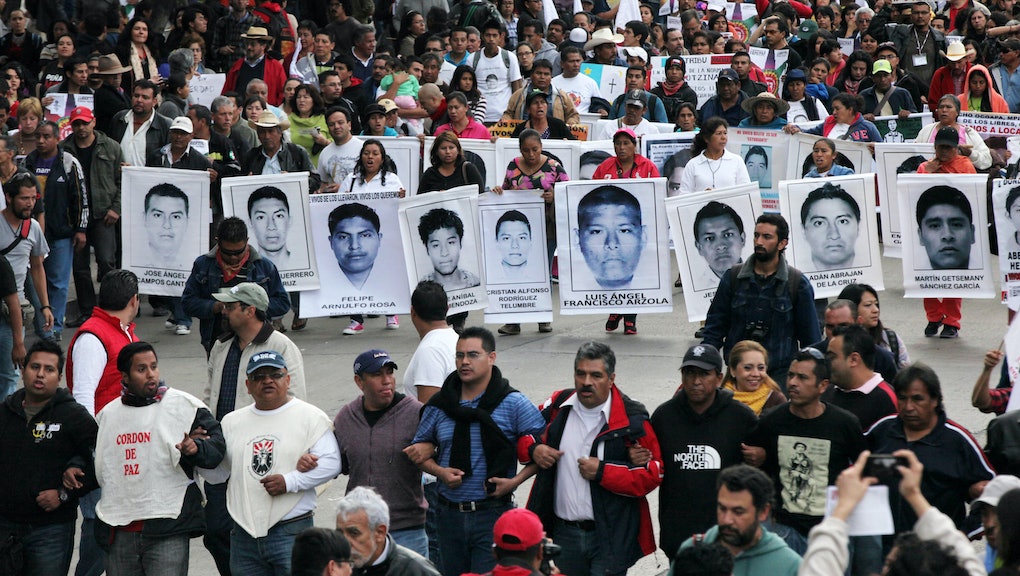 The news: After months of waiting, there may finally be a hint of justice in the saga of Mexico's 43 missing students.

Mexican officials have charged the wife of former Iguala Mayor José Luis Abarca in the disappearance of 43 college students in September in the Guerrero province. Maria de los Angeles Pineda has been "jailed indefinitely" on charges that she and Abarca masterminded the abductions, Al-Jazeera reported Tuesday.

A judge issued a warrant Monday for Pineda's pretrial detention "for her likely role in committing organised crime ... and operations with funds of illicit origin," said Tomas Zeron, who leads the criminal investigation unit of the prosecutor's office.

While Pineda was already under "provisional arrest," the decision to transfer her to a high security prison indicates that justice may finally be served. Prosecutors have named Pineda and Abarca as the "probable masterminds" of the kidnappings allegedly carried out to prevent opposition demonstrations.

But while the news marks a slice of hope for the families of those missing 43 students, full justice for their families and the nation may be a long way off.

The background: On Sept. 26, 2014, a police-backed drug gang in the Mexican town of Iguala abducted and brutally murdered 43 students, college men in their 20s who were on their way to raise money for an upcoming protest.

While several members of the cartel Guerreros Unidos confessed in November 2014 to taking part in the killings and alleged that they set fire to the bodies and cast the remains in the San Juan River, Pineda is thought to be the mastermind. Authorities believe the attacks were ordered because the students were suspected of planning to interrupt a speech Pineda was to make that evening. Adding to that suspicion, Abarca and Pineda disappeared just hours after the students were reported missing.

The students' disappearance sparked protests across the nation and also caused a crisis for Mexican President Enrique Peña Nieto. Frustrations over the country's systemic inequality, corruption and collusion between law enforcement and the narcoterrorists who reign terror on innocent Mexicans have boiled over into the outrage over the student abductions, throwing Nieto's authority into jeopardy.

It may not be enough: While charging the mayor's wife might present the trappings of justice, it doesn't attack the root of the systemic gang violence that's plagued Mexico for years. Since the students' disappeared in September, 19 mass graves in the area have been uncovered and over 26,000 people remain missing. Mexico's war on drugs has claimed an estimated 100,000 lives since 2006, which marks the launch the government's campaign against narcotics traffickers. But the students' disappearance signals that, in spite of the reform efforts that have been made, change has largely failed.

President Barack Obama expressed this concern to Nieto during a meeting Tuesday at the White House. While America does bear some of the blame for Mexico's current state of corruption because U.S. money continues to support the corrupt authorities, Nieto barely made any effort for reform, nor avenged the deaths of the students that happened months ago.

While we may be winning the battle on narcoterrorism at this point, the war is far from won. Even if Obama does pledge to support Mexico's war on drugs, that support will be pointless if change doesn't occur at the root of the problem.

Throwing Pineda in prison may bring some sense of relief to Mexicans, but until the system of corruption and government malfeasance that allows people like Abarca and Pineda to survive and thrive is dismantled or reformed, there will never be justice for the 43 missing students.