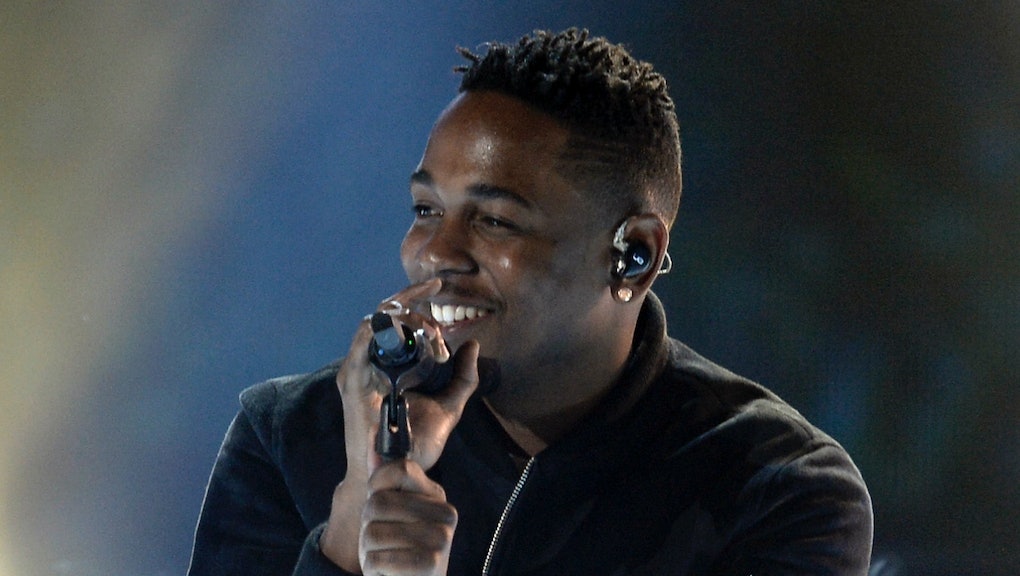 Rappers only care about money and bragging — at least that's been the popular stereotype. But Kendrick Lamar, the 27-year-old rapper from Compton, California, has never fit that mold. He's looking for way more out of hip-hop than a fat paycheck: In a thoughtful essay in hip-hop magazine XXL, Lamar just proved again and again that he's one of the and most insightful and humble rappers in the game.

It's an incredibly thoughtful statement from the rapper, and it only reinforces the modesty Lamar has exhibited repeatedly. Though Lamar netted close to $9 million in 2013, he only used $524,000 of it to buy a relatively humble 7,800-square-foot home in Eastvale, California. Compare that to the $6.5 million mansion owned by fellow young gun Tyga, or Drake's $7.7 million Yolo Estate and one can see how uncharacteristic this modesty is for hip-hop's biggest names.

In his essay, Kendrick details his creative process, his struggles to make sense of his newfound fame and the inspiration he draws from his fans. His words set the tone for what we can expect for his second major label album, which will likely come some time this year. Lamar's influence is only growing, and no one in the genre deserves it more. Here are 13 inspirational quotes from the essay:

On being a role model

I think one of my biggest battles within myself is embracing leadership. You always grow up and you hate the term "role model." You would say, "I don't wanna be a role model. I don't want none of that." ... It's impossible to fight the title of role model. Especially when the type of music I make is so personal."

On wealth and poverty

Life is sad in general and I'm meeting these different people every day. It kind've snaps me back into reality outside of what I do. Outside of the girls, outside of the cars, the money, it really ain't that important when you meeting somebody that's still in the struggle.

I hate the word "famous." I'm aware of it. I know people treat me different because of it. And the more I am aware of that and play into it, the more I become detached from the real world. So it's really about balance.

I battle with it all the time and the idea of being in all these places — the big spots, all the events, the lights — it's all for your ego. It's all for your own confirmation to be like, OK, I'm somebody. But truthfully, you've always been somebody. You don't need the lights.

It's definitely a gift and a curse when you make music as personal as I make it. Of course you get the kids out there that say that they relate to you and this song saved their lives, and you helped them with their assignment for this and that. And then at the same time, your privacy is not respected ... it's just something that I've gotta accept.

I was nervous because I didn't think the people would understand it. And I get a call from Pharrell. He said he had a copy of the album and it's amazing ... Pharrell said, "Never feel that way again. When that little negative man come behind your head, always follow your first heart, and that was your first heart, to put the album out like this." This is his words verbatim, he said, "Watch what's gonna happen."

I always thought confirmation would be having a lot of money, and things I could do for my family. Because that was what we was taught when you come from these urban neighborhoods. ... So once I got the money and everything else that comes with it, I felt like I wasn't satisfied ... but I don't even spend it on myself, I spend it on my loved ones. That makes me feel good knowing I can support somebody that's in need.

My greatest fulfillment of accomplishment was having somebody that I looked up to for so many years and knowing that I put in that same dedication and work and them saying, "Thank you." And them being able to recite them lyrics.

On why music matters

This is more than just music for me. This is actually a piece of me. I'm obsessed with it. And that's how I take it. .. Taking those inspirations and going into that booth, that's something that I hold dear.

What's crazy to me is that I feel the same energy now that I felt before my first album. I know there's lot of pressure for me on this new album but it don't necessarily scare me. It's almost confirmation, like, go in there and challenge yourself just the same way you challenged yourself the first time.

I believe in this theory that when you get success and you get fame and money, it makes you be you times 10. I was a pretty shy and to-myself type of person as a kid. And now 15 years later I'm in front of people every day, tens of thousands of people. So that makes me more of a recluse. That makes me not come outside of my world on the outskirts of LA and bounce around different places and things like that.

What I do is for a greater purpose and we all need money and things like that to survive, but the energy around some of these spaces, it can draw you into a crazy place. And I've seen and heard some of the greats go out because of it. And I'm saying this right now to let everyone know, it's real and you have to be mentally steady 100% in order to keep doing it at a high level and still maintain your sanity.

I'm always paranoid. I'm already a person who thinks a lot; sometimes I may overthink things or think too much. So when you're put into a space where you feel like you can't necessarily trust your close ones, that can do some whole other crazy thing to you psychologically. Seriously. All you got is you and God at the end of the day.