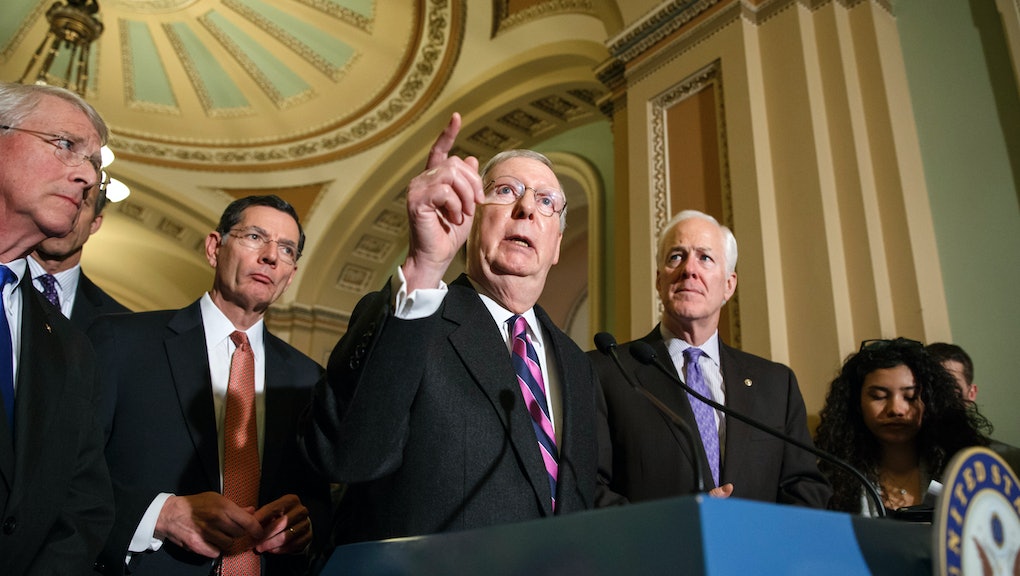 The news: On the first day of the 114th Congress, the newly ascendant Republican anti-abortion zealots in control of the House and Senate didn't waste any time proposing draconian new restrictions on women's rights.

Sen. Lindsey Graham (R-S.C.) has also hinted that he is planning to introduce an identical measure in the Senate, thus bringing the anti-abortion movement to its closest flirtation with national success since the Partial-Birth Abortion Ban Act was passed in 2003.

The background: Republicans have been quick to paint their opposition to abortion as a winning issue.

"In a Republican Senate, under my leadership, we would have the kind of real debate on the issues that the American people want," newly minted Senate Majority Leader Mitch McConnell (R-Ky.) told an anti-abortion group late last year. "For six years, the president has been isolated from this growing movement. He will be forced to listen to the cause that's brought us all here this morning."

McConnell was referring to the explosion of anti-abortion laws on the state level over the past decade, a trend documented by the Guttmacher Institute. Since the 2010 election, states have passed an astounding 231 abortion restrictions, including restrictions on when and why abortions can be performed, limits on what procedures can be covered by government health care and strict rules designed to drive abortion clinics out of business.

What it means: These laws have successfully suppressed a woman's right to choose in states where they've passed, though they're slowly being attacked in the courts. But they're not doing much to change women's minds about abortion, instead only making them more painful and difficult to obtain. A 2014 comprehensive study found that so-called "informed consent" laws, requiring women to look at a picture of the fetus before choosing whether to have an abortion, had almost no impact on the number actually performed.

Unfortunately for Republicans, the growth of anti-abortion laws on the state level is unlikely to culminate in major success in D.C. For one, President Barack Obama will surely veto any new restrictions on women's health. Then there's the fact that while ranting about abortion is a good way for conservatives to play up their right-wing bona fides for base voters, it's simply not a major federal priority. Just 43% of voters rank abortion rights as "important." Working-class white voters are simply much more concerned with economic issues than they are with pushing evangelical social dogma.

By elevating an unobtainable ban on abortion to the highest level of their policy platform, the GOP risks overplaying their hand and further alienating female voters in the run up to 2016. It's still a losing issue for the right, no matter how painful and drawn-out they choose to make it for the nation's women.