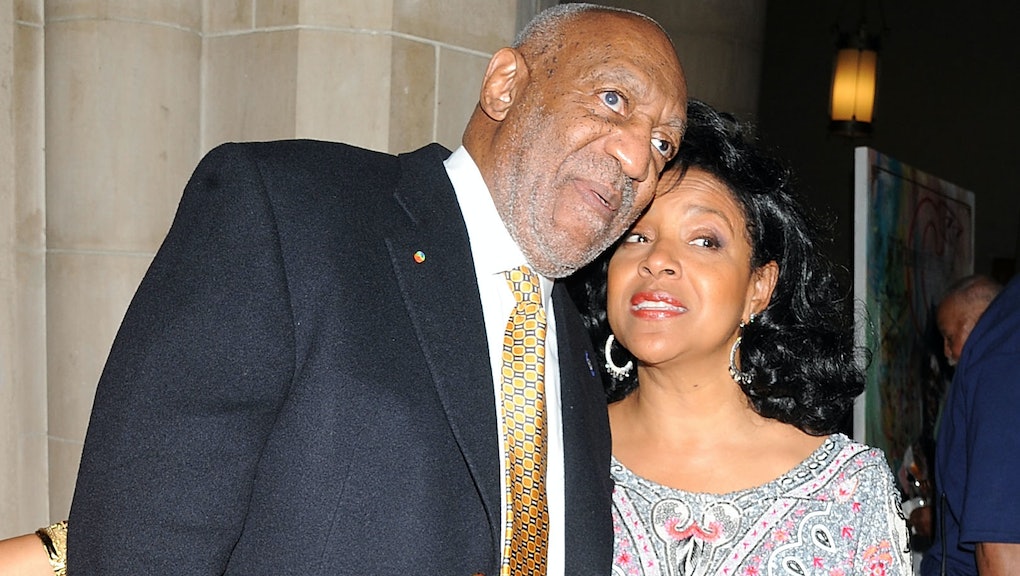 Phylicia Rashad Is Right: Legacy Is at the Center of the Bill Cosby Rape Allegations

Claire Huxtable is standing by her man.

Phylicia Rashad, who played Claire Huxtable opposite Bill Cosby's Heathcliff in The Cosby Show, has been embroiled in controversy this week after vehemently defending her former co-star against rape allegations.

Yesterday, news circulated that Rashad defended her former co-star — calling his accusers liars in the process — during an interview with Showbiz 411: "Forget these women. What you're seeing is the destruction of a legacy," the outlet reported her as saying. "And I think it's orchestrated. I don't know why or who's doing it, but it's the legacy. And it's a legacy that is so important to the culture."

Not surprisingly, her words created something of a media firestorm, and last night she appeared on ABC's World News Tonight with David Muir to address the controversy.

But her carefully chosen words did not placate victims advocates, especially on a day when three more women came forward, publicly detailing their own allegations of abuse at the hands of Cosby.

Gloria Allred, noted women's rights activist and lawyer, represented these women in a press conference yesterday, where she addressed Rashad's comments. She then expanded on those initial thoughts in an email to Mic:

"Although she says that she was misquoted and did not say 'Forget the women,' she went on to say, 'This is not about the women,' which in my opinion is tantamount to saying 'Forget the women.' Of course it is about the women who allege that they were victims of Bill Cosby. ... It appears that Cosby's reputation is more important to her than the drugging and sexual misconduct that the women allege he inflicted on them. Ms. Rashad stated that she had never heard that women said that they were drugged or raped. Has she been tone deaf to the numerous allegations made by many women against her friend, Bill Cosby, in the last month? If she hasn't heard them, does she want to hear them? If so, I invite her to meet with my clients and hear these allegations in person. After that, I look forward to learning if she still believes that this is not about the women and if she still wants to defend her pal Bill Cosby."

Allred similarly dismissed Rashad's claim that she had not heard details about the allegations, including that Cosby drugged his victims. "Has she been tone deaf to the numerous allegations made by many women against her friend, Bill Cosby, in the last month? If she hasn't heard them, does she want to hear them? If so, I invite her to meet with my clients and hear these allegations in person," she wrote.

But Rashad is right — this is about legacy.

There is no denying that The Cosby Show was a staple of American pop culture for decades, touted for its groundbreaking and generally positive portrayal of African-American families. The highly successful show, as Rashad said in her ABC interview, "inspired a generation of young people to consider and pursue higher education."

So while the Root's Kirsten West Savali is right when she writes that The Cosby Show "was not then, and certainly isn't now, the only media depiction of a healthy black family," its lasting impact is undeniable.

The Cosby Show and its patriarch are unquestionably legacies. But it's this very legacy that buttressed Bill Cosby's celebrity, making him a powerful man in a male-dominated business, something his victims have spoken about when explaining why they waited so long to come forward. It also romanticized his image.

"I struggled with how to reveal my big secret, and more importantly, what would people think when and if I did?" Beverly Johnson wrote in Vanity Fair. "Would they dismiss me as an angry black woman intent on ruining the image of one of the most revered men in the African-American community over the last 40 years? Or would they see my open and honest account of being betrayed by one of the country's most powerful, influential and beloved entertainers?"

The takeaway? Clearly, Phylicia Rashad does not want to believe her friend and co-star could be a predator. That is a horribly tough pill to swallow. But hiding behind talk of legacies — as have several other celebrity friends of Cosby — is not the answer, either. When we talk about sexual assault allegations involving high-profile individuals, it's important to always turn a critical eye to their celebrity status, for it is a double-edged sword. Celebrity may exacerbate one's vulnerability to accusations, but it may also create an aura of untouchability that can enable an abuser to think he or she can get away with anything.