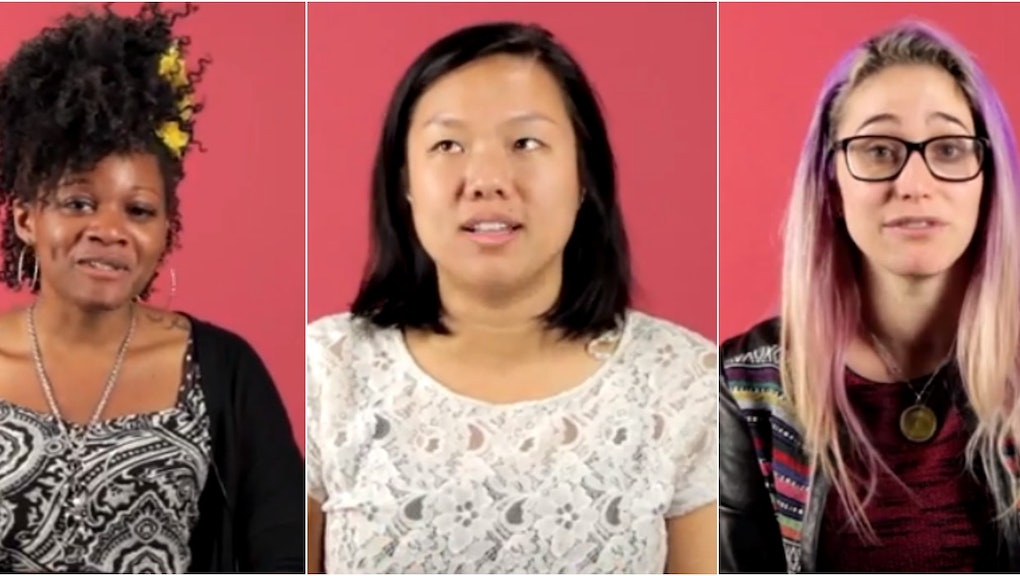 This Video Finally Answers One of the Oldest Questions About Dating

The answer should be so obvious that it's not even worth asking. Except that when it comes to straight dating in 2015, it's still assumed that men are in the driver's seat, and that women are still divided on the issue.

But if women take a few moments to really think about it, it clear that line of thinking is silly. That's what this latest BuzzFeed video, in which a group of women tackle the question "Can a woman ask a guy out?" makes obvious: The women who have asked dudes out have had unequivocal success — and no one can come up with a solid reason not to.

"I would never go so far as to tell a guy I like him first," one woman said tentatively. Another admitted, "There was one time I liked this guy, and he was too shy to make a move, I was too shy, and it just never happened."

They're not out of the norm, evidence suggests. Common headlines like "How to Get a Guy to Ask You Out Online" reaffirms the standard that men have the control, which plenty of women still assume. One psychologist's 2011 survey of 87 straight students found that 93% of women preferred to be asked out, with only 6% preferring to do the asking but not necessarily because they don't want to. Plenty of women know that they could but are too self-conscious or nervous about breaking what's become a strong societal norm.

We're more progressive than we think. But it doesn't need to be this way. In a survey of 5,000 straight singles, Match.com found that 92% of single men are comfortable with a woman asking them out. Online dating has likely helped ease this acceptance, giving women equal footing with men to do the asking (on most apps, at least).

That doesn't mean that there still isn't work to be done when it comes to correcting damaging gender standards. Too many men are still being taught to "pick up" women and treat courtship like a power grab (as this horrible pickup artist recently reminded everyone), perpetuating a harmful view of masculinity that inevitably makes women feel threatened.

But there are probably more men than we think who take a more progressive, egalitarian view on dating. Notably, when the men of BuzzFeed took on the same question, and the answers were clear in the affirmative. "I think a lot of guys don't necessarily expect it even though a lot of guys are down for it," one said.

"A lot of women kind of drop hints, it's kind of weird to me. I wish they could just be like, 'Let's just go out,'" another guy said. "And I'd be ten times more likely to buy you a nicer dinner." Oh, and: "It's a major turn-on for me."

Just one more frontier for gender equality. But most important isn't that guys are, in fact, OK with it. It's that women asking men out is good not only for women, but for all of us.

As one woman pointed out in the video, "Girls playing more aggressive roles in society can only help us. Like, why does the guy have to control it? If you're freaking digging this guy or girl, you should be like, 'I just want to spend time with you.' What's wrong with that?"