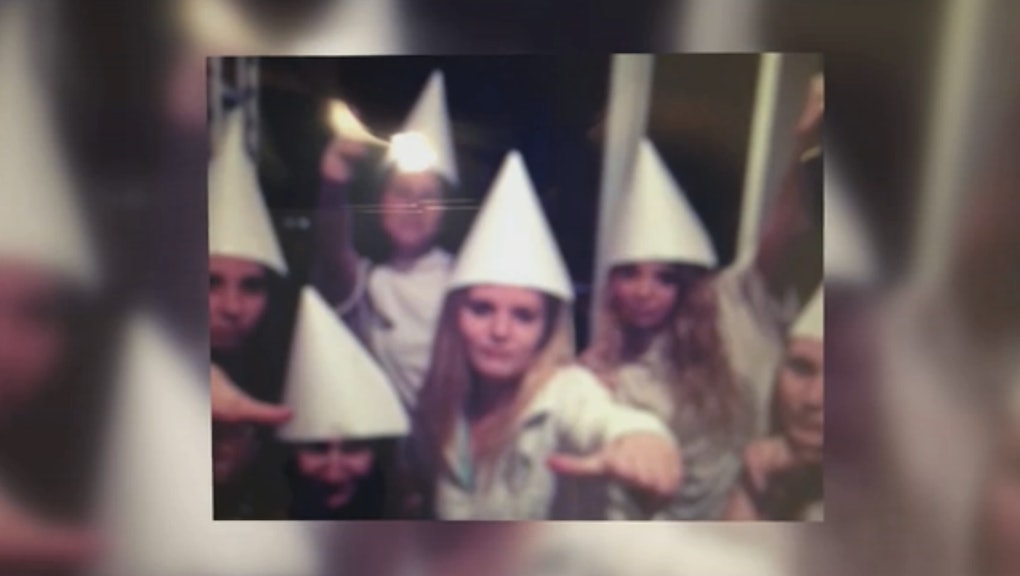 This week, residents of Nash County, North Carolina, are speaking out after racism reared its ugly head again in the heart of their community.

Over Thanksgiving break, and just days after the Michael Brown verdict, six white female students from Nash Central High School posted a picture on Instagram of them partying in KKK-like attire, pointing their fingers like guns.

People are conflating ignorance and innocence. When questioned by Nash County Sheriff Keith Stone, the girls said they were "simply making party hats." He agreed: "In my opinion, I saw no laws that were violated," Stone told the ABC locate affiliate in Nashville.

This notion of "simply" doing anything implies a feigned ignorance that seems implausible. At the very best, these teens are guilty of an astounding ignorance. But their response is also indicative of how racism is still perpetuated in America today: People refuse education and then feel absolved from responsibility for insensitive or offensive actions.

Communities are turning a blind eye. But not everyone was satisfied with this excuse. With heightened racial tensions across America after the verdicts in the cases of Brown, Rice and Garner, residents of Nash County brought their concerns about the picture to the school board. "The incident of the young women posing as KKK members was a threat to our children and community," school parent Monica Gilmore said during an open board meeting on the topic. Local resident Bronson Williams agreed: "It seems to be the opinion of this school district that if we are offended, to shut up and be quiet."

Perhaps the real problem is that we don't have a system in place to deal with this type of incident. The photo wasn't taken on school grounds, and it's not technically illegal to wear KKK-looking clothing or to be an ignorant teenager. What these girls, and apparently the county's authorities, fail to understand, however, are the historical implications and symbolism of their acts. Originally called the "Ghouls," the Klu Klux Klan was created by six Confederate soldiers after the Civil War in 1865 in order to terrorize black people. Throughout the 20th century, Klan imagery became one of the biggest symbols of systemic racism and intimidation in America.

Whether or not these six white girls actually meant to appropriate KKK garb, they clearly do not understand the consequences of their actions, the effect of the picture or their level of accountability in the perpetuation of racism in America.

And this is a problem.