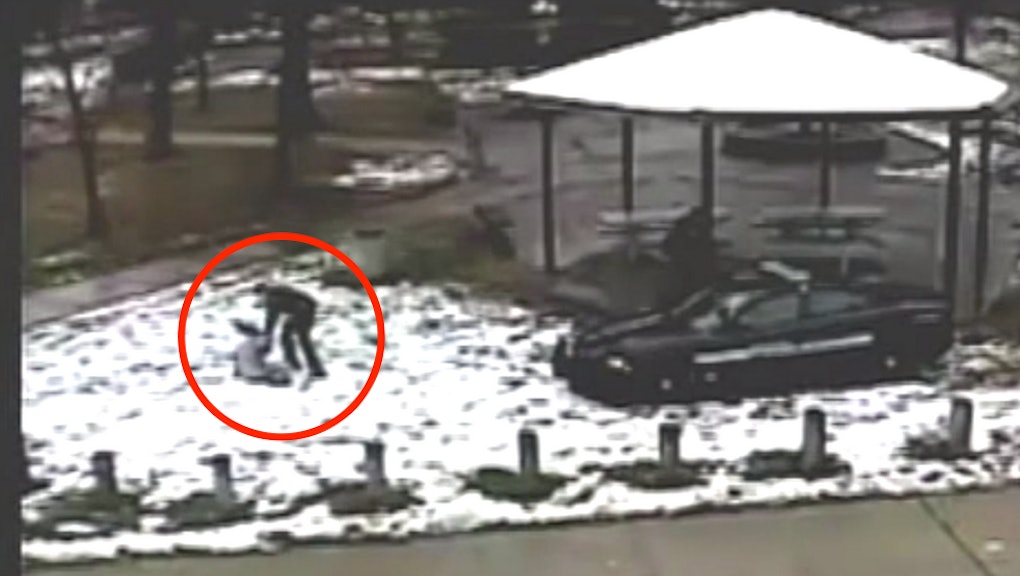 Tamir Rice's 14-year-old sister was handcuffed and left to watch her 12-year-old brother dying in the snow after he was shot by a Cleveland police officer on Nov. 22, 2014, as seen in a new video released by the city late Wednesday. The teen, who was tackled and detained as she tried to approach her wounded brother, witnessed the ordeal unfold from the back of a police cruiser less than 10 feet from his body:

The disturbing new details, which match the account given by Rice's mother, Samaria, at a press conference in December, are taken from an extended surveillance video clip obtained by the Northeast Ohio Media Group. City officials had initially released a short portion of the video and refused to release the full version to the public.

Tamir Rice was confronted by officers while waving an air pistol in an empty Cleveland park. Officer Timothy Loehmann, seen in the video exiting from the passenger side door, opens fire less than two seconds after the stepping out of the vehicle.

Here is the full 30-minute clip. Rice's sister approaches the scene from the left-hand side at the 1:42 mark:

"This has to be the cruelest thing I've ever seen," Akron, Ohio-based attorney Walter Madison told Cleveland.com after watching the extended video.

No help: Neither the first-year officer who shot Rice, nor his partner Frank Garmback, appear to offer the wounded boy medical aid or comfort. Garmback is the one seen confronting Rice's sister and pushing her to the ground. The first person to administer first aid is an FBI agent who arrived on the scene by chance.

Paramedics arrive eight minutes after the first shot is fired, and Rice is stretchered into an ambulance about five minutes later.

Unfit for duty: Hours before they received extended surveillance tape Wednesday, the Northeast Ohio Media Group also reported that Loehmann failed an exam to become a deputy with the Cuyahoga County Sheriff's Department in September 2013. According to internal documents, his application was denied after he scored a 46% on a written cognitive test. Seventy percent is considered a passing grade.

Loehmann, who had been with the Cleveland Police Department for less than a year, was fired from his previous job with the Independence (Ohio) Police Department after Deputy Chief Jim Polak filed a report in November 2012 citing, per CNN, "a pattern of lack of maturity, indiscretion and not following instructions" and a "dangerous loss of composure during live range training."

Cleveland police investigated: U.S. Attorney General Eric Holder announced in early December 2014 that the Cleveland police would be subject to federally mandated reform for the second time in a decade. A Department of Justice investigation released the same day tracked a pattern of abuse and neglect, including an unrelated incident in which an officer punched a handcuffed 13-year-old two times in the face.

What comes next: There is no timetable on the fate of Loehmann, who remains on paid leave pending the results of an investigation by a specially appointed group of Cuyahoga County officers. That group will deliver its findings to the local prosecutor, who, like in Ferguson, Missouri, and New York City, present the evidence to a grand jury to consider an indictment.