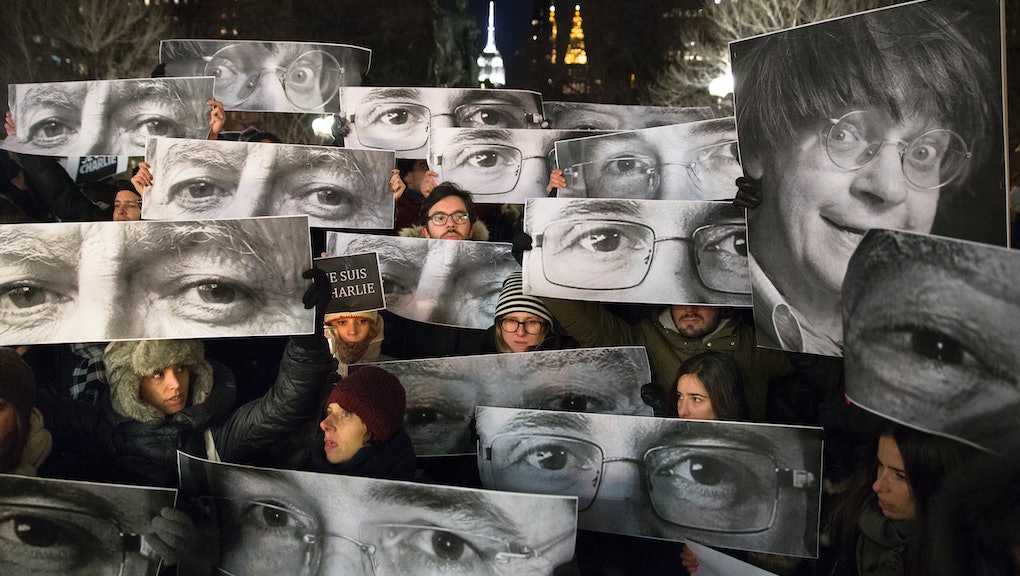 Within a couple hours of the horrific attack on the French newspaper Charlie Hebdo, which left 10 journalists and two police officers dead Wednesday, the Internet  swelled with nearly identical emotions from all sides: fear, anger, confusion and outrage. From conservatives who never miss a chance to portray Islam as inherently barbaric to liberals who embrace a militant secularism in which all religion is inherently barbaric, there was near-universal agreement that we should take a stand for freedom of speech and show the terrorists we're not afraid. The #JeSuisCharlie hashtag trended immediately, thanks in large part to people who had just learned of the newspaper's existence.

Surely we'd all benefit from living in a world where the political analysis of tragedies doesn't begin approximately 40 seconds after they occur, but we don't. Immediately, naturally, we have to know how, and why, this could have happened, and who is to blame. But in the rush to comprehend the attack on Charlie Hebdo, perhaps we're asking the wrong questions.

Freddie deBoer has written a good reflection on this tendency to immediately and loudly affirm positions no one disagrees with: that freedom of speech is good and murder is bad. The immediate reaction to the Charlie Hebdo attack demonstrated this in the extreme; there wasn't just shock and grief, but an apparently widespread worry that liberal values are under attack and would be in a truly precarious situation without a vociferous defense on the Internet. If not for all the tweets and the websites republishing the provocative cartoons (a few of which are translated here), then the terrorists would win.

The problem is that we're obviously not talking to the terrorists. We're talking to ourselves, and about things we all agree on. As deBoer put it, "We're debating, in other words, dead moral questions, and for the same reason we always do: because that debate allows us to ignore the ones that might lead us to a different place than the celebration of our own liberal righteousness."

With a few hours to reflect, pundits have asked some slightly more nuanced questions, but even those fail to escape the thicket of clichés and assumptions that virtually predetermine how these sorts of debates will go. For example:

1. Is Islam to blame? Almost immediately upon the arrival of news of political violence, usually before any Islamic group has even claimed responsibility, a debate breaks out about whether it represents "real" Islam or a twisted, fundamentalist perversion. The implicit question is whether there is a barbaric core of Islam that should be met with a "tough" (read: barbaric) response, and is no doubt partially a response to the political reality that right-wing politicians, especially in France, will use Islamic extremism as a dangerous political weapon.

But in debating whether "Islam" is responsible for a particular attack, we have already handed the framing of the issue over those who ideologically blame Muslims for Western problems regardless of the evidence. New York Times columnist Nicholas Kristof no doubt thinks he is being a good liberal by rebutting Westerners' perception of Islam as "inherently extremist," but he is rebutting an essentialist conspiracy theory, similar to the notion that Judaism has an insidious essence that is somehow a shadowy threat to Christian civilization.

There is no such thing as "Islam," just as there is no such thing as "Judaism" or "Christianity" — all of which are popular nicknames for movements that have been in constant historical flux, as internally divided as they were externally contested. If we're debating whether "Islam" has an extremist essence, we've already accepted the dubious notion that it is possible for a diverse, historically evolving movement to have a fixed essence.

2. Should we have the right to criticize religion? This is the more prevalent question that has been asked in relation to Charlie Hebdo, one that vastly overstates the real threat to Western free expression. In the wake of the Salman Rushdie affair, the Danish cartoons and the collective efforts of the New Atheists, some Westerners, even liberals, have embraced the notion that our societies are kowtowing to Islamist threats and increasingly self-censor to avoid being attacked. This development has seen liberals selectively embracing the right-wing critique of "political correctness" where Islam is concerned.

While the concern about violent responses to outrageous speech is not entirely absurd, the threat is massively exaggerated — something that is more tempting and unexamined in the wake of the relatively rare horrific incident like the Charlie Hebdo attack. The reality remains that thousands of articles, books and blog posts slandering Islam in the most extreme terms possible have been published in the United States without resulting in terrorist attacks (ever heard of Pamela Geller?), while French political rhetoric and public policy alike have been profoundly insulting and discriminatory against Muslims without provoking violence.

The point is that it's a diversion to worry over whether secular societies are losing the right to be critical of religion, even if the occasional Westerner tries to make a case that we should try being less offensive to Islam. Criticism of religion as such is not in any significant sense under attack. We are critical of religion, all religions, for the most part without incident. It's somewhat akin to the insane American phenomenon of "reverse racism" that citizens of a globally dominant bloc of societies (namely, those of Western European provenance) have come to imagine themselves victims at the hands of a corner of the world upon which they wreak untold violence to this day.

If we've been asking the wrong questions in the wake of the Charlie Hebdo attack, what would better ones be? Is there a way to approach it that could break through the clichés? Here are a few suggestions.

1. What are the historical roots of the particular radicals behind these violent attacks? Rather than asking whether some nonexistent, ahistorical version of "Islam" is "responsible" for a specific attack, we might look at the specifics of individual groups and incidents. Who were the attackers? If they grew up in France speaking perfect French only to end up alienated from it and driven to violence, how and why did that happen? Why does it remain so difficult for immigrants and even French citizens of African descent to assimilate into French society?

Inquiring into the origins of specific cases of violence and the structural conditions that created them is by no means to "justify" those acts or excuse their perpetrators. But contrary to the way it is often portrayed in the media, reactionary violence is not driven by some sort of pure evil or wild irrationality; it is usually a specific response to specific conditions. Changing the social and economic conditions that make it more likely people will respond with violence is the only democratic way to prevent them, not some secular iteration of a moral and ethical exorcism. Even the most extreme authoritarian alternatives (domestic militarization, racialized deportation regimes) aren't guaranteed to prevent every single attack.

But it seems that many Westerners would prefer this sort of fear-based, authoritarian response to terrorism, just like Americans seem to prefer militarized police forces and mass incarceration to addressing the racist policies that make them "necessary." Why would that be? Because to address the root conflicts would be to admit that the "other" — the Muslim, the immigrant, the African-American — has a legitimate and equal claim on "our" society. It would be to admit that our traditions and history didn't fall from the sky with the perfect, inalterable configuration of divine principles. And when it comes down to it, Westerners are just as irrationally tribal about their traditions, ethnicities, and religions as everyone else. We stand for universal equality, as long as some of us can remain more equal than others.

2. Why are France's "universal" values so particular? In his statement on the Charlie Hebdo attacks, President Barack Obama said, "Time and again, the French people have stood up for the universal values that generations of our people have defended." This is fully in keeping with the French Republic's self-understanding as the earthly embodiment of universal values, which it represents to the world: reason, equality, liberty, etc.

But of course, historically speaking, these values are anything but universal: They are the result of a halfway rejection of Christianity that resulted in the civil religion of French republicanism. While the French Revolution did its best to erase the trappings of religion from the country's culture and institutions, its new "universal" values made little sense without Christian underpinnings (a condition that remains largely true of most Western societies today).

Though France is one of the most secular countries in the world, its version of secularism, known as laïcité, sits far more comfortably with its historical Catholicism than with anything else. That's why there is still more backhanded collusion between the French state and the Catholic Church than any other religion, why ostensibly "equal" restrictions on religion always disproportionately affect Muslims and why an ostensibly irreligious society can still get so worked up about gay marriage.

3. Is Charlie Hebdo both a champion of free expression and an exponent of racialized French secularism? Unlike other French institutions, Charlie Hebdo delivered on its promise of universal rational scrutiny, its covers featuring far more Catholic officials performing sex acts than depictions of Muhammad. Protecting this kind of outrageousness is crucial to free political order.

While the newspaper can't be characterized as reactionary — many of its writers, including slain editor-in-chief Stéphane Charbonnier, were committed leftists and communists — its "universal" criticism of religion rarely took into account the particular historical entanglement of France with Islam. And even in satire, historical conditions and present power dynamics matter; they cannot be hidden beneath the supposedly "universal" nature of satire. In 21st-century France, where an overwelming majority of the population is atheist, attacking integral aspects of the religious practice of Muslims, such as the burqa, is not the same as mocking the pope. It strikes at the heart of the religious identity of an already embattled minority in a way that can only be described as targeted bullying.

That is essentially the point of this article by Richard Seymour, which dishonest critics have mischaracterized as advocating that Charlie Hebdo placate Islamists. "No, journalists are not legitimate targets for killing," Seymour writes. "But no, we also shouldn't line up with the inevitable statist backlash against Muslims, or the ideological charge to defend a fetishized, racialized 'secularism,' or concede to the blackmail [that] forces us into solidarity with a racist institution." Whether or not it is right to describe Charlie Hebdo as "racist," it definitely defended the French idea of secularism that has come to be inseparable from targeted religious persecution.

Asking these questions won't necessarily explain why this particular attack happened, and it certainly won't make it the fault of French society that four of its most beloved cartoonists are dead. But maybe it could take a horrible event and turn it toward a more open future than to a retrenched, poisonous past that is ever on the verge of returning.

It can't be said any better than Abdennour Bidar did yesterday: "Let us not commit the historic mistake of refusing Islam and Muslims' participation in the project of society. On the contrary, let these ignoble attacks reinforce our national solidarity and our determination to build with Islam a civilization capable of reuniting tomorrow the best of the humanisms of the East and the West. France must be the site of that reunification, with the Muslims who are now part of its destiny."