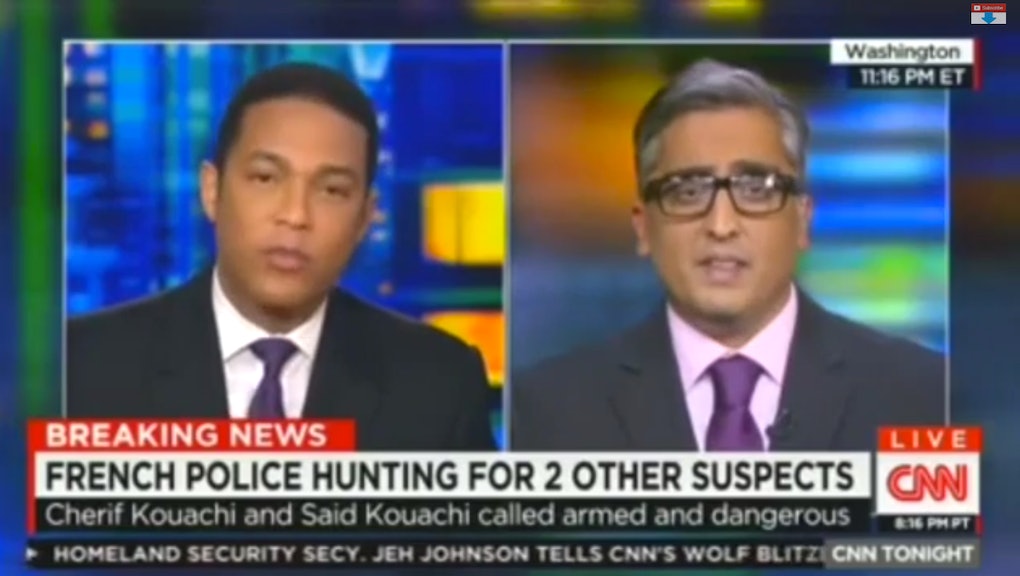 When you're interviewing a prominent Muslim American human rights lawyer in the wake of a terror attack, plenty of great questions spring to mind. "Do you support ISIS?" is not one of them.

Yet that's what CNN's Don Lemon asked Arsalan Iftikhar, an attorney, activist and senior editor of the Islamic Monthly. Lemon prefaced the question by citing a Newsweek poll from August that found 16% of French respondents supported the Islamic State. (The poll was conducted before any videos of the group beheading prisoners were released.)

Iftikhar, who had been talking at length about how Muslims are held to a double standard in always having to refute horrific acts, was taken aback. "Wait, did you just ask if I support ISIS?"

The interaction starts around the 4:40 mark, though the entire interview is worth watching:

The obvious problem: Lemon was focused on getting Iftikhar to answer whether those 16% of French citizens should be called "Islamic extremists," asking twice in a row before the inexplicable question.

Iftikhar recovered admirably, saying, and then restating when asked a second time, that support for an ideology does not necessarily translate to support for violence, and pivoting away from the bizarre focus on an August poll about the Islamic State to Wednesday's attack at Charlie Hebdo's offices in Paris he was ostensibly brought on to discuss.

"Whether you're dealing with Paris or Islamabad or Jakarta," he said, "we're as horrified as everybody else about what happened."

The double standard: In the interview, Iftikhar said it's up to Muslim leaders and activists to publicly state their affinity for peace after the shootings that killed 12 people, including the French satirical magazine's staff members, visitors and two police officers.

"In Norway a couple years ago, you remember Don, Anders Breivik murdered 77 kids on an island and tried to assassinate the prime minister of Norway and left behind a 1,500-page treatise calling himself a soldier of Christianity," he said. "We didn't expect every Christian leader around the world to go on national television and condemn him because we knew that he was a lunatic."

"Point taken," Lemon replied, before asking him whether he supported the Islamic State — clearly the point has not yet been taken and may not be for a long time.