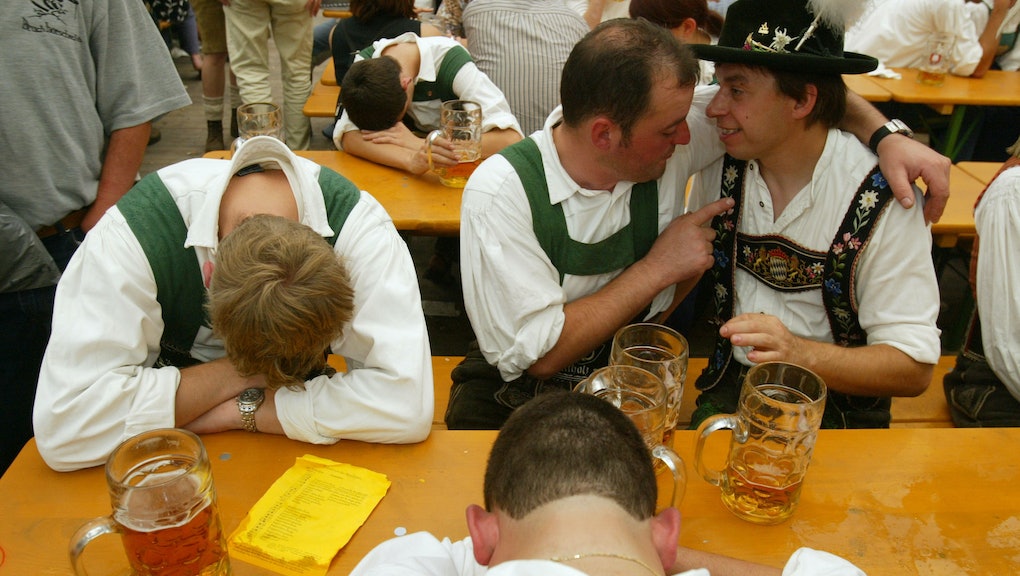 It's no secret that excessive drinking is unhealthy. But people keep on drinking, at least according to imbibing data, research on alcohol-related diseases and anecdotal evidence from living in the world. In the U.K., where 90% of adults drink, binge drinking is a public health crisis and blacking out is a big problem among teens.

Traditional solutions might be to spread awareness about the dangers of booze, or ramp up addiction treatment efforts. But one British doctor has a different strategy. David Nutt, a psychopharmacologist at Imperial College London, is developing a drug, chemically similar to party drugs like Ecstasy, that will give people a buzz so they don't get sloshed. That's right: Take drugs to drink responsibly.

Nutt spent 20 years of his career trying to treat people with drinking problems. But in 2006, he realized that he might never defeat the power of alcohol through treatment. So he changed his plan.

"Why not find something safer that people can take to get the same effects [as alcohol]?" said Nutt of his about-face. "But back then it was just an idea. Now I have compounds."

Nutt came up with a concept for a drug called Chaperon, a "binge-drinking mitigation agent" that would essentially save drinkers from their own brains.

Once people start feeling drunk, the brain's chemical response makes them keep drinking. "Alcohol," Nutt said, "takes away the ability of many people to exert control over their drinking, even if they want to."

He's filed a patent on one compound, based on a drug with a dicey history, and has more than 80 other compounds to test. The compound with the pending patent is chemically similar to a number of prescription and recreational drugs, Nutt said, including the club drugs Ecstasy and MDMA and the antidepressant bupropion (better known as Wellbutrin), which is now also used for smoking cessation.

The idea is that you take Chaperon while you're drinking. At some point, ideally before you're drunk, Chaperon takes effect, making alcohol seem disgusting and producing a light euphoria. You get a buzz without more booze. The New Scientist's Michael Slezak took the compound for a spin and chronicled his experience. After five hours and two doses of Chaperon, he felt an intense but controlled euphoria and the idea of drinking became repulsive.

Nutt isn't the only person interested in controlling substance abuse through drug use. Last year, the European Medicines Agency approved nalmefene, which helps people regulate alcohol intake by blocking some of the pleasure people feel from drinking.

But Chaperon is a little different. Chaperon doesn't block pleasure. Instead, it actually gets you a little high — a quality that may make it even more controversial, or probably would in the U.S. But Nutt pointed out that replacing one high with a safer high isn't unheard of: E-cigarettes, safer than tobacco-filled cigarettes, hinge on a somewhat analogous concept.

Nutt isn't sure exactly how people will use Chaperon, but he identified a few possibilities. Chaperon could be developed as a drug for people with substance abuse problems. This route would probably take five to seven years, as drug approval requires clinical proof of efficacy and safety.

Chaperon could also be a cocktail additive, something people pour into their drinks to limit intake. In this case, the drug would be more of a food item. This process is shorter — food items need to be safe, but they don't need to have any proven medicinal effect. Right now, Nutt's working on getting funding to test more compounds and move along the one with a pending patent.

"I don't know of anyone deterred from drinking because they fear they'll become an alcoholic — maybe children of alcoholics," said Nutt, "but the majority of people know the harms of alcohol and drink anyway."

Beyond curbing alcohol intake and making people feel good, Nutt mentioned another perk of Chaperon: 0 calories. So, in two to seven years, you may have a calorie-free high to prevent you from booze-fueled terrible decisions. Until then, find a human chaperone to cut you off.