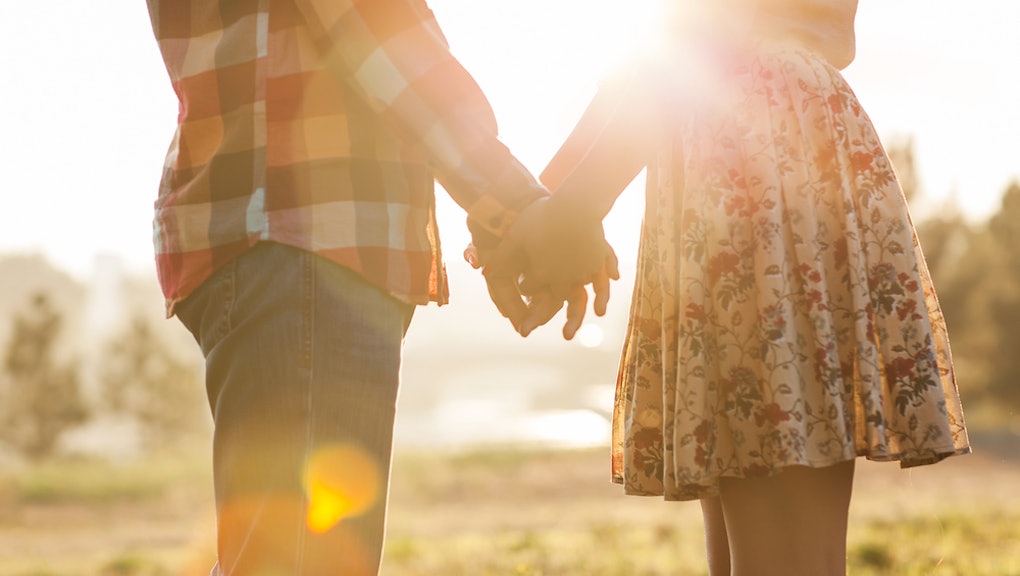 Researchers Have Very Good News For the Dating Lives of Introverts

The common narrative about introverts is that they're shy and antisocial — not exactly qualities you'd want in a date. But while it's easy to assume that introverts would have a harder time dating than extroverts, the reality may surprise you.

"I think many introverts go into the dating field with a sort of one-down feeling," Dembling told Mic. "It can feel like nobody will notice you among all those bubbly extroverts. The way I think of it: Extroverts sparkle, introverts glow. If you appreciate your own quiet glow, other people will see it too."

But introversion by definition isn't just about being social or antisocial; it's a temperament, describing someone with a strong ability to turn inward and concentrate on their own feelings. And while Dembling says introverts may have a harder time meeting people to date, she maintains that "dating itself, however, is not hard for introverts because we tend to be most comfortable in one-on-one social interactions, where we don't have to compete for attention."

In fact, being an introverts may actually have some unexpected advantages in the dating field.

Introverts have a tendency for deeper conversations and thus deeper connections.

Introverts aren't shy. They simply don't gain energy from social interactions like extroverts do, which can make small talk feel cumbersome and possibly pointless. But that doesn't mean they can't hold a conversation.

"I think another misconception is that introverts would be dull dates," Dembling says. "In fact one-on-one situations are where introverts can shine. We are very good listeners, good at drawing people out, enjoy substantive conversation. We don't chitchat very well, but we love to converse, which makes for a good date."

Since introverts can be slow to warm up to new people, Dembling suggests they often have luck building relationships off group activities (a class or book club) or shared locations (a favorite coffee shop). As a result, Dembling says, they have the advantage of starting to develop a connection before they even have their first conversation — and those first conversations will be more substantive and flow more easily once they do speak.

Their sense of mystery can attract people.

Most of the introverts Dembling interviewed said they're more likely to be pursued than the pursuer.

"It can be catnip for the kind of extroverts who want someone who won't compete for the spotlight with them, or who, consciously or not, want someone who will make them slow down sometimes and find quiet space," Dembling says. Indeed, many introverts are even described as aloof, which can be equal parts intriguing and intimidating to others.

In her book, Dembling talks about her own experience with her extroverted best friend in high school. "She was the center of attention wherever we went," Dembling says. "I assumed nobody noticed introverted me, but years and years later, when I reunited with people from high school (thank you Internet), I learned that actually, many boys had noticed me. In fact, a guy I'd had a secret crush on back then admitted he'd felt the same. Too late to do anything with it, but, as he said, 'Nice to know.'"

Moral of the story? Introverts attract more people than even they realize — it just might depend on the pursuer to take the first step.

Introverts can make good partners for both introverts and extroverts.

When it comes to dating, the introverts in relationships included in Dembling's research were pretty equally divided between dating other introverts or dating extroverts. And both can be successful.

Introverts tend to be thoughtful partners, which often cues them in on when to step back and let their more extroverted partners shine, and how to provide a quiet space to recharge for more introverted individuals.

They have the "ability and inclination to listen hard."

Dembling says one quality introverts bring to dating are their listening skills. "We pay attention, we think things through, we analyze, we ask questions. In the right circumstances, we can be quite good at drawing people out and that is very useful on a date," she said

This relates to the introvert's preference for deep conversation, which can take the date to another level. In a selection from her book that Dembling shared on Psychology Today, she quotes an introvert who told her, "I like to learn everything about a person I'm dating, and I try to be as open and communicative as possible. ... I'm extremely loyal and reliable."

Dembling warns that introverts "have to make sure our talent for listening doesn't backfire on us, however, so that we end up drowning in the other person's chatter."

They're less likely to speak without thinking in fights.

Introverts are generally non-confrontational, which has benefits and drawbacks. "Many of the introverts I spoke to tend to shut down in the face of conflict," Dembling says. "It's not ideal, but nor is extroverts' tendency towards full-out shoot-from-the-hip emotion dump."

While each couple needs to work out the best way for them to fight, some fights can benefit from this slower approach to an argument. By pausing and reflecting before speaking, there is time to process the real problem instead of getting angry and making unfair accusations.

In her Psychology Today excerpt, Dembling shares quotes from Lynne and David, who she spoke to about their respective marriages to extroverts. "I like to have time to process the situation and then decide how best to respond. This can be helpful, as words spoken cannot be retracted or forgotten easily, or at all," said Lynne. Similarly, David thinks that "taking time, instead of rushing headlong into something" has benefitted his marriage to an extrovert.

Ultimately, Dembling says, "The best thing introverts can do for themselves is to respect and honor their own introversion, treating it as something of value, something to showcase on dates, rather than feeling like they need to put on an extroverted dog-and-pony show." It turns out introverts have plenty to offer any relationship much more important than first-date chitchat.