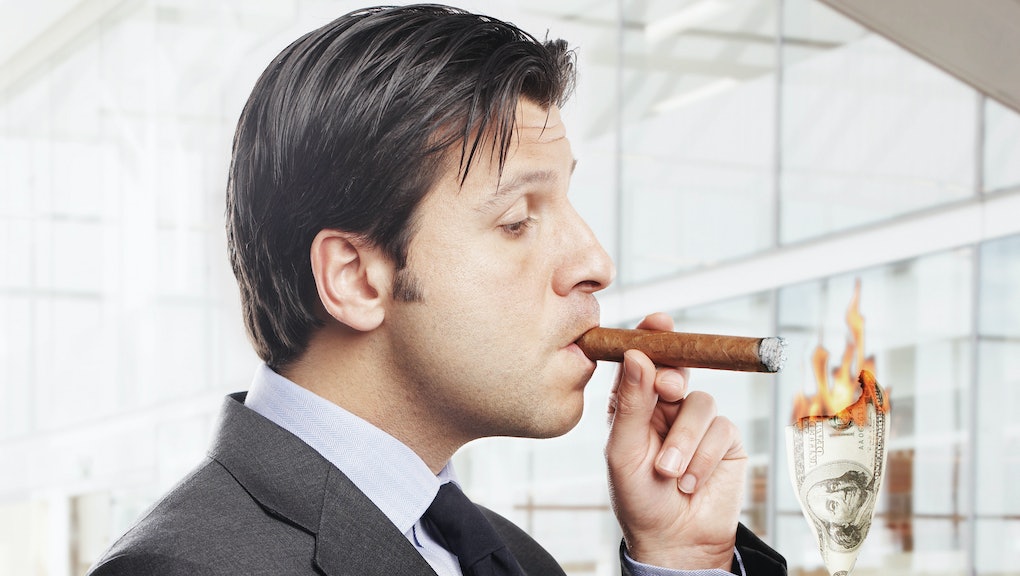 Money has established itself as a reliable corrupter of the soul, but perhaps there should be some inquiry into whether it also corrupts the mind.

A finding in a recent Pew Research Center poll spotted by the Washington Post suggests that a majority of the most financially secure people in the United States believe that "poor people today have it easy."

On Thursday, Pew published an analysis of the data collected in the run-up to the 2014 midterm elections that focuses on links between financial security and political beliefs. The data reveals a correspondence between greater levels of material comfort and the belief that poverty is fun and easy:

As you can see, a majority of respondents who fall into two highest strata of financial security believe that "poor people today have it easy because they can get government benefits without doing anything in return." The least financially secure people are far and away the most likely to believe that the poor have hard lives and that the government could do more to give their lives dignity.

This dovetails naturally with social scientific research that shows that hierarchy can breed gaps in empathy and that people with the most social power pay less attention to those with less power. But in a country where 1 in 6 people suffer from hunger and malnutrition, it is remarkable to find that so many people — who are more likely to be educated and informed about current events — can endorse the notion that the poor have it easy.

Another one of Pew's findings is essentially a corollary of this attitude. Greater financial security decreases the likelihood that someone supports government intervention in the lives of the destitute when it requires taking on debt:

In reality, the United States does have the money to help the less fortunate, and it doesn't require taking on debt. By one estimate, $175 billion is the amount of money that it would take to bring every person in the U.S. who is in poverty up to the poverty line, which is just over 1% of the nation's GDP. Solving poverty is far more complex than that figure suggests, but in light of the fact that the U.S. spends the better part of a trillion dollars on defense, it's a useful reminder that our government has the ability to address the needy if it chooses to shift its priorities.