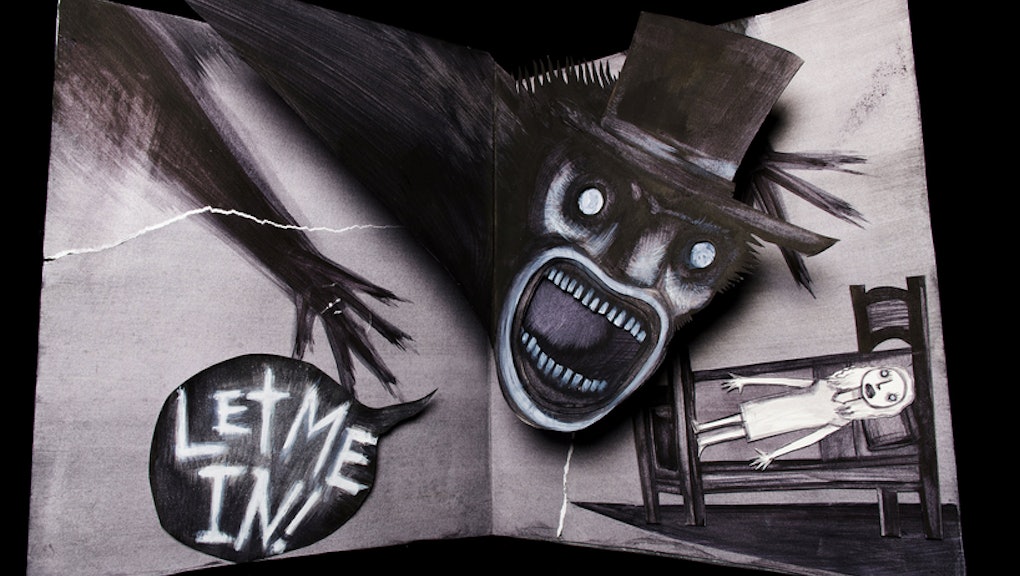 The Real Best Film of the Year: An Australian Indie Horror Movie About a Pop-Up Book

This cryptic warning, delivered to a fragile Australian single mum from the pages of the creepiest goddamned pop-up book ever written, is as true for her as it is for the white-knuckled viewers of The Babadook, an independent horror film from the land down under that will haunt your dreams forever.

Combining stripped-down direction and cinematography, psychological terror (far more sophisticated than "jump scares" of insipid teen slasher flicks) and a heartfelt message of tragic love, The Babadook is the best movie of the year.

Awards season — the time of year when the world's most overpaid, overprivileged people drape themselves in finery and soak up each others' awesomeness in a series of televised ceremonies while we watch from our couches and try not to spill Pace Picante on our undershirts — is upon us, with nary a nomination for the Australian horror film that made even The Exorcist director William Friedkin wet his pants:

Although this year's crop of Academy Award nominations for Best Picture have not yet been named, the list of films jostling for the top honor at Sunday's Golden Globe Awards are a good indicator that the Academy of Motion Picture Arts and Sciences will stick with a tried-and-true nomination formula: a triumphant biopic, a few depictions of historical figures beset by social prejudices, a feat of filmmaking by a venerated director and a star-heavy drama nobody has actually seen.

It's not surprising: So-called "genre films" like The Babadook, which follow easily delineated thematic formulas ("action movie," "superhero movie," "horror movie") are almost always shut out of the major award nominations. Although the Academy doubled the number of possible nominations in the Best Picture category to 10 in 2010, allowing genre films like District 9 and and Avatar to garner nominations, horror remains almost completely neglected. Only one true horror film has won a Best Picture Oscar since 1929: The Silence of the Lambs.

To be fair, genre films are not usually too original. So it's hard for one to come along and transcend its classification, and that's why The Babadook (though a critical darling around the world) is such a triumph of filmmaking.

What's a "Babadook"? It doesn't sound that scary. You have no idea. Amelia, an orderly at a nursing home in South Australia, is still reeling six years after the violent death of her husband on the night of the birth of her son, Sam. Due in part to her grief, Amelia struggles to love her son, a troubled insomniac whose dreams are haunted by an unnamed monster.

Sam's paranoia gets him kicked out of school just when Amelia faces both trouble at work and unresolved issues with her pretentious sister. As things spiral out of control, Amelia's world contracts until she is left trapped in a poorly lit Victorian home with only her oppressively needy son for company.

One night, Sam discovers a mysterious volume on the family's shelf: Mister Babadook. Amelia unsuspectingly reads him the pop-up book, which finally gives Sam's nightmare a face. The Babadook is a malevolent top hat-wearing monster with claw-like hands and an unhinged grimace. Amelia assumes that the Babadook is just the hallucination of a disturbed child, but when she begins to see glimpses of the creature herself, she's forced to confront the most dangerous demon a mother can face: her own psyche.

Want a glimpse of The Babadook's genius? This is how director Jennifer Kent made reading a bedtime story the scariest thing in the world:

But it's not just a "creature feature." At its dark heart, The Babadook is the story of a mother confronted by her most monstrous impulses. Beset by grief, isolated from other adults and constantly hounded by her son, Amelia is haunted by her own mind. It's just like the storybook warns: "You start to change when I get in, the Babadook growing under your skin."

As the film's terror reaches a crescendo, the viewer is faced with an unanswerable question: Is the Babadook truly torturing the family, or is he just the manifestation of a mother's mind at its breaking point?

"I latched onto this idea of facing the darkness," Kent said in an interview with the New York Times. "I wanted to tell the story of a woman who was forced to face the unfaceable."

It's a horror film that could only have been directed by a woman. The standard slasher trope of a buxom young woman in a teddy and full makeup running screaming through the woods before being hacked to bits is replaced by an exhausted widow, hair snarled and eyes baggy, who must find the strength to combat an impossible monster: herself.

With a 97 percent "Fresh" rating on Rotten Tomatoes and fevered demands for a real-life version of the storybook Mister Babadook, the film seems destined for a permanent place in the horror pantheon.

Despite all this, The Babadook hasn't broken through the festival circuit to receive a single mainstream nomination.

It's not the only independent movie Hollywood is ignoring this year. Jenny Slate's performance in Obvious Child as a stand-up comedian finds out she's pregnant after a one-night stand and decides to have an abortion has earned praise from Sundance to Cannes, but hasn't received one mainstream nomination. Whiplash (a film about a young drummer berated by the fearsome jazz maestro at a competitive music school) is likely to make a star out of lead Miles Teller, but it hasn't received a single nod outside of the festival circuit. Scarlett Johansson was able to wash the taste of Lucy out of our mouths with her cryptic, subdued performance as an alien in disguise in Under the Skin, which earned a place on nearly 100 "Top 10" lists. But even she failed to help the movie get a single major nomination, even for its eerily beautiful score.

Awards shows have fortunately moved in the direction of rewarding directors, actors and studios who take risks with cinematic storytelling in recent years: Jennifer Lawrence's breakthrough role was her Oscar-nominated performance in independent film Winter's Bone; in 2011, the silent French romantic-dramedy The Artist took home Best Picture. But for every statuette taken home by an independent filmmaker, there are four more taken home by someone playing a fictional North American soldier in the present day who participates in no sex scenes and doesn't die in a large studio film.

If we can't give them gold, we can at least give them our money: Independent films are more likely to revolve around stories that are underrepresented in contemporary culture, more likely to star unknown and minority actors, and more likely to give a big middle finger to the MPAA's fascistic ratings system (This Film Is Not Yet Rated is an excellent independent film on the subject). With the rise of streaming video, the availability of these titles is wider than ever; you don't have to live in a major coastal city with a bevy of indie movie houses to see the newest Lars von Trier or a Kurosawa retrospective. The next time you're stuck at home with a Netflix queue full of prequels of sequels, give an independent film a shot.

But if it's The Babadook, just remember to lock the door after.