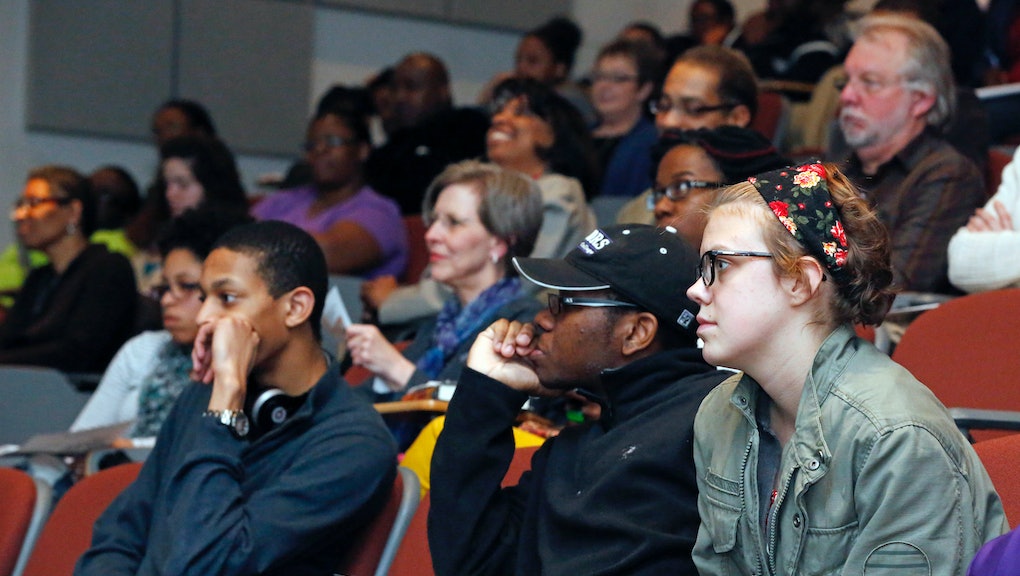 Colleges have more diverse student bodies than ever, but does the culture of college campuses always reflect this increased diversity?

In effect, no. A new report published by Harvard University's Hutchins Center surveyed over 200 students at four U.S. institutions (Missouri State University; another Midwest public institution; a public institution in the South; and an Ivy League university) and found that minority students on college campuses continue to encounter widespread and harmful microaggressions that affect their academic success and their comfort on campus.

The report's conclusions suggest that while colleges have taken great measures to open their doors to students of all races and genders, they have done little to address or remedy these interpersonal, subtle forms of prejudice that negatively affect students' daily lives.

Admitting a diverse study body isn't enough: The report was motivated by a common disparity observed between admission rates and graduation rates: "Between 1976 and 2007, blacks as a percent of total students grew from 10 to 13; Hispanics, 4 to 12; Asian/Pacific Islanders from 2 to 7; and women, from 48 to 57." Yet the graduation rates are much lower for these minority populations and "markedly lower than those for white students," the report stated. An increase in diverse student bodies, the report finds, has led to increased "chilly climates" on college campuses — daily encounters of racist and sexist aggressions that lead to psychological distress, fear and the consequential inability to academically perform well and, therefore, to graduate.

Microaggressions are so powerful because of their "brevity and subtlety," the authors noted, which makes not only the targets but the perpetrators more like to dismiss them. Such behavior also, the report explains, "make[s] it harder to obtain legal redress or even the support from family and friends, because the manifestations can too easily be deemed minor and the target overly sensitive if unable or unwilling to shrug it off." As a result of this "lack of validation and support," many people who experience microaggressions reported feeling "frustrated, isolated, silenced, frightened, ashamed, discouraged, helpless, powerless and despondent."

Colleges have failed to act: Colleges perpetuate the environment for microaggressions to thrive, Voices of Diversity Director Paula Caplan said in an interview with Mic,  by refusing to "recognize the vast, troubling effects" and therefore failing to "educate students and staff about these negative effects or create dialogues publicly about ways to deal with them."

When asked for a way that colleges can be more proactive, Caplan told Mic that change must occur "from the top down and from the bottom up." She explained: "It is important but insufficient for college presidents or deans to say that sexism and racism are unacceptable and must be dealt with head-on unless steps at every level and in every realm of the campus are taken."

One tangible way that college administrations can facilitate a more welcoming environment for minority students, in addition to creating dialogue, is to continue to make systemic changes. For instance, the report suggests that having both a more diverse faculty and more diversity of voices on the syllabi, other than white men, would make students feel more valued and respected in the classroom. There is not, as Caplan explains, "anything wrong, per se, with white men or their work." It's classrooms that relay on white-centered material and white faculty role models that are limited "and thus limited learning opportunities in many ways."