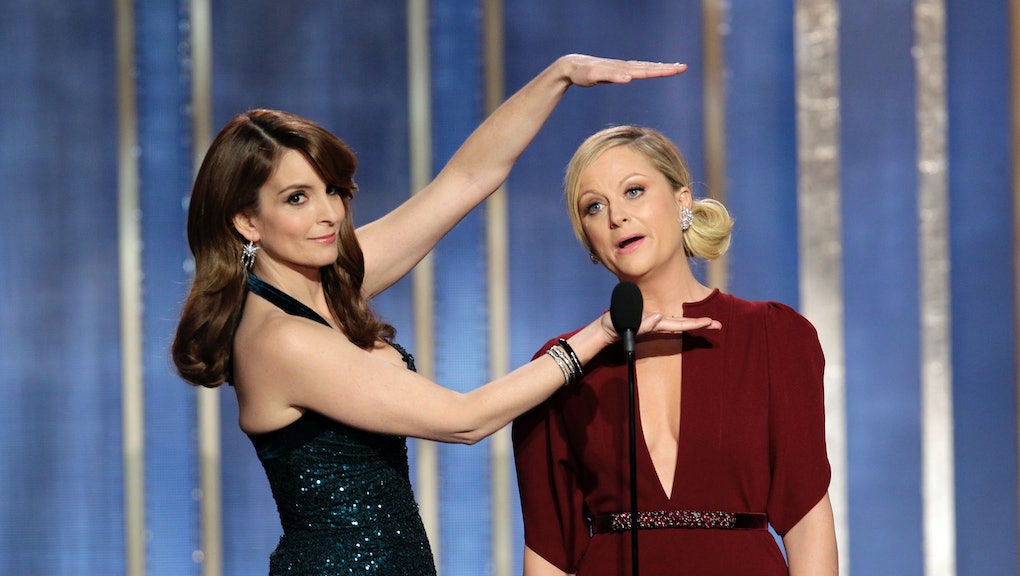 Comedy's Hall of Fame is littered with some of culture's most brilliant duos: Laurel and Hardy, Cheech and Chong, Abbott and Costello, Key and Peele, Bert and Ernie. Each pair brought something distinct to the realm of humor, and each pair had a kind of irresistible chemistry that charmed, delighted and just plain worked. Watching these twosomes makes it clear that two is, in fact, better than one.

On Sunday, the world will have the pleasure of seeing another splendid team in action: Tina Fey and Amy Poehler.

"People think of us as a 'comedy team,' and I am not quick to correct them," wrote Poehler in her memoir Yes Please. "Why wouldn't I want to connect myself to the fiercest and most talented voice in the comedy world?"

Part of the pair's appeal stems from their genuineness. They're best friends in real life, and it shines through in nearly every interaction they have with each other. They have the sort of rapport that is at once wholly unique and wildly relatable; as Jesse David Fox at Vulture writes, "Their best friendship is our best friendship."

They also happen to be comedic geniuses, which certainly helps. But their individual brands of comedy, as distinct as they are, are also complementary, and come together in such a way as to make you wonder how on earth they were ever apart.

In honor of history's greatest comedic pairing since, well, ever, here are some highlights from Poehler and Fey's magical 20-year partnership:

Fey and Poehler became Saturday Night Live's first female anchors in 2004, kicking off a two-year span of hilarity for the show's longest-running skit. The Lohan sketch was a highlight, featuring the young Mean Girls star at the beginning of her ascent to fame — and before all the controversy that would become the focus of her later years.

They first hosted the awards show in 2013, and it set the bar high for the years to come (they hosted in 2014, as well). Their opening monologue took shots at everyone from Ricky Gervais and James Cameron to George Clooney and Anne Hathaway, and did so with brilliant snark and smarts — sorry, Taylor.

Although they didn't appear onscreen together, Poehler's turn as Regina George's mother is a thing of beauty. Lacy Chabert, who played Gretchen Wieners in the film, described Poehler's infamous boob-chewing scene: "She was such a pro through it. She's trying to do her lines and being so professional, and this dog is chomping on her fake boob. I'll never forget that."

Fey and Poehler assume the roles they were born to play: Sarah Palin and Hillary Clinton

Fey's turn as vice presidential candidate Sarah Palin was particularly brilliant, but putting the two of them onstage together — Poehler's Clinton could barely keep the inner rage from spewing out all over the place — cemented the sketch as one of Saturday Night Live's best.

Even Fox News fell for the trick — when reporting a story about Palin, the channel accidentally used a photo of Fey as Palin. Whoops.

A 2004 appearance on The Tonight Show With Jay Leno

Fey summed it up best with the following anecdote from her book Bossy Pants:

"Amy was in the middle of some such nonsense with Seth Meyers across the table, and she did something vulgar as a joke. I can't remember what it was exactly, except it was dirty and loud and 'unladylike.'

Shine on, Amy and Tina.