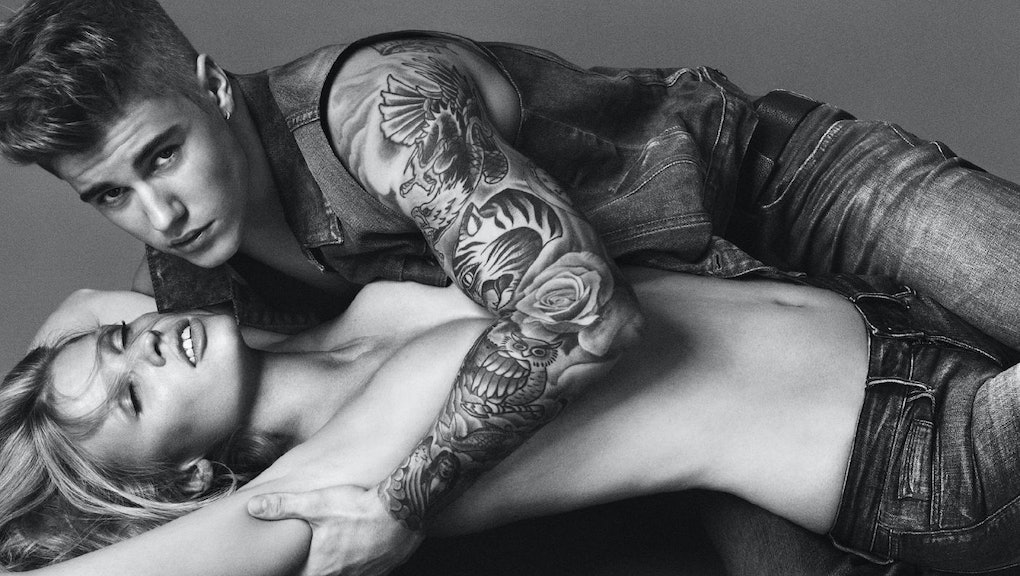 The only thing that comes between Justin Bieber and his Calvins is, apparently, Photoshop.

That a designer underwear empire would Photoshop its models to look more well-endowed isn't exactly a shock, but there's something about altering a photo of a celebrity who's shirtless most of the time anyway that feels even more shallow than usual.

Website BreatheHeavy.com released the allegedly unretouched photo from the Canadian pop star's recent photo shoot with Calvin Klein, citing "someone connected" to the shoot as the source of the photo. In addition to boosting what our mothers taught us to call the "underwear area," Calvin Klein also appears to have pumped up Bieber's pecs, biceps, triceps and derriere.

A source also described Bieber's on-shoot behavior in unflattering terms: "He was basically a douche. He hit on [fellow model] Lara several times and she had to stop him, basically calling him out on being just a child."

Bieber's legal team went into overdrive, sending BreatheHeavy a cease-and-desist, which the site has complied with:

"Team Bieber sent BreatheHeavy a cease-and-desist letter because of the alleged unretouched Calvin Klein photo we posted, asking we remove the picture in question as well as provide a retraction. Because BreatheHeavy is not about making anyone feel bad or intentionally stirring the pot (and we are definitely not here for lawsuits), we shall retract the story per request."

Calvin Klein, one of many fashion houses that have faced allegations of Photoshopping models into oblivion before, was a little more coy about how the end results of the photo shoot were achieved, instead focusing on Bieber's professionalism in a statement to US Weekly: "Justin showed up early every day with amazing energy; he completely trusted us and gave it his all. ... It was really impressive."

Sure, it's easy to make fun of Justin Bieber. But the idea that a fit young man with literally millions of screaming fans needs to be Photoshopped to become "sexier" is offensive. That Bieber is in his 20s makes the practice even more pernicious; young men face similar unrealistic beauty standards that young women do, and as a result, 1 in 3 practice unsafe eating or fitness behaviors to reach those standards, according to the National Eating Disorders Association. Due to gender stereotypes about eating disorders, men are also less likely than women to seek help for these harmful behaviors.

As for bulking up Bieber's bulge, it's the photographic version of an Enzyte commercial. Spam emails preying on men's insecurities that promise guys elephantine penises for "small monthly fees" are one thing, but a global campaign featuring an obviously boosted bulge contributes to those anxieties on a whole new level. In a study published in the Journal of Health Psychology, men listed penis size as one of their top body concerns, along with height and weight.

Photoshopping models may sell a few more pairs of boxer briefs in the short-term, but when Calvin Klein selects a celebrity with millions of impressionable followers as the face (and body) of a major campaign, it has a responsibility to those fans to represent him fairly.