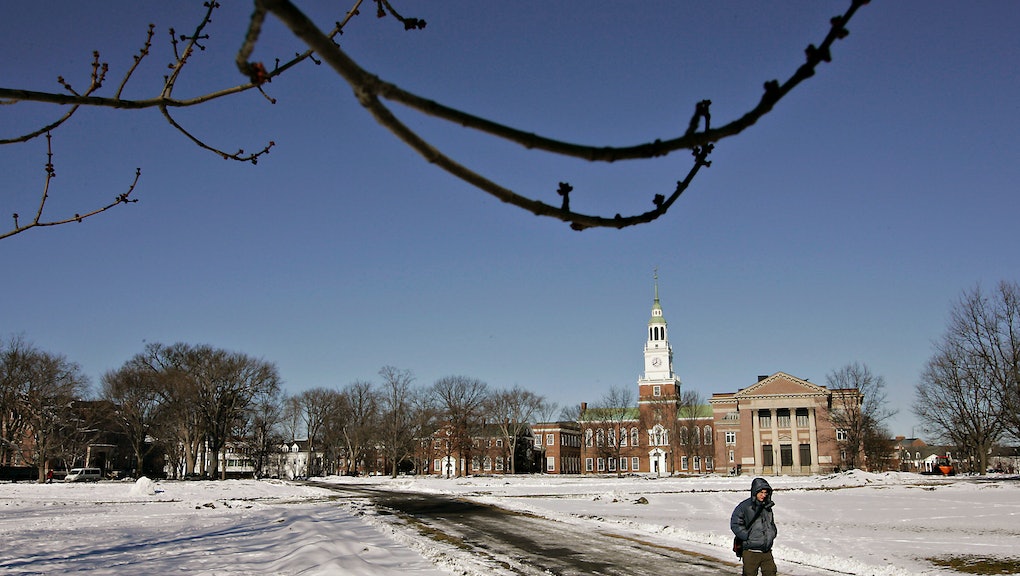 Does Dartmouth offer courses in irony?

According to the Valley News, school spokeswoman Diana Lawrence confirmed that 64 students face possible sanctions. Religion Department chair Randall Ballmer* stated to the Valley News that "with a few exceptions, most of the students were suspended for a term."

According to Balmer, students in the course had been misrepresenting class attendance. To compensate for the skipped classes, the students who failed to attend class allegedly gave handheld devices known as "clickers" — gadgets used to answer quizzes in class — to peers who did attend. Those students then answered questions in class on behalf of their absent friends. Ballmer told the Valley News that 43 students actively handed clickers to their peers, but 21 more students confessed that they had helped classmates cheat.

"Student athletes": The course in question was geared to help student athletes (who frequently benefit from lower admissions standards, even in the Ivy League) with their challenging coursework. After a popular first run last year, the fall term's class swelled to more than 280 students. That's when attendance and cheating became a problem.

According to the Dartmouth student handbook, the potential sanctions a student faces for honor code violations are severe:

"Given the fundamental nature of the Academic Honor Principle in an academic community, students should expect to be suspended if they engage in acts of academic dishonesty. Any student who submits work [that] is not his or her own, or commits other acts of academic dishonesty, violates the purposes of the college and is subject to disciplinary action, up to and including suspension or separation."

Faculty members may also "reserve the right to fail the student for the exercise, the course, or both," although Professor Ballmer said in an email to the Valley News that "after many sleepless nights," he had decided to lower the accused students' grades by a full letter, rather than fail all 64 of them. "The whole affair is sad and regrettable," he wrote in a piece in the Valley News. "Dartmouth's reputation as a first-class educational institution, which it is, has taken a hit, at least in the short-term."

*Full disclosure: The writer once took a class with Professor Ballmer at Columbia University and made him laugh one time with a slideshow about the Men on a Mission calendar of beefcake Mormon missionaries.