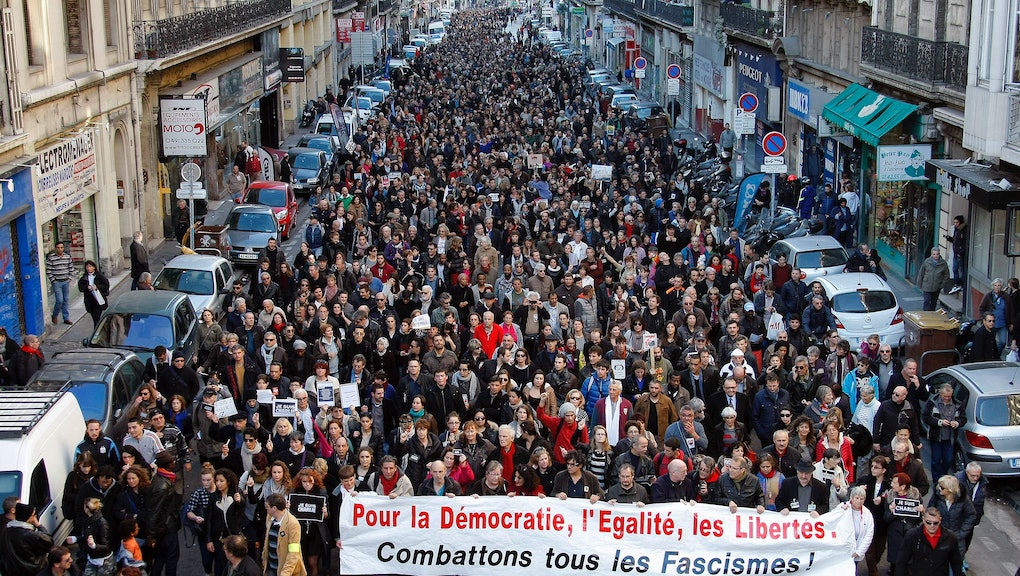 France is in a state of mourning and shock. Seen everywhere this week, from the posters held at the Place de la République to the digital funeral buntings across Twitter, "Je Suis Charlie" is a phrase that reflects solidarity with the 12 people murdered at France's satirical magazine Charlie Hebdo. On Saturday, nearly 700,000 people throughout France rallied in tribute to the 17 victims killed in three days of violence by Islamist extremists in Paris.

For journalists and human rights activists, the attack on Charlie Hebdo — which had faced controversy over satirical illustrations of the Islamic Prophet Muhammad — has become a rallying point. It seems as if the whole world has mounted a full-throated defense of free speech and freedom of the press.

Yet in 2012, few people took to the streets (or even to their laptops) to express sympathy for another embattled newspaper in Paris.

On Feb. 15, 2014, masked vandals attacked the Paris headquarters of Zaman, a conservative Turkish newspaper with a pro-government bent, smashing windows and threatening violence against the paper's journalists.

As the 15 attackers overturned furniture, damaged computers and intimidated reporters and editors, the Zaman staff remained calm. It was, after all, the third attack on them in six months after similar incidents on Aug. 16 and Oct. 11, 2011.

Zaman's staff suspected that all three attacks were the work of a group with close ties to the Kurdish rebel organization, the Kurdistan Workers' Party or PKK. In the first two attacks, vandals sprayed graffiti throughout the office and plastered posters of PKK's imprisoned leader, Abdullah Öcalan. The February incident also marked the 13th anniversary of Öcalan's imprisonment and coincided with an attack on Zaman's Cologne bureau, where someone lobbed a Molotov cocktail into the building.

While officials conducted an investigation into the Paris incident, and German authorities arrested two suspects with alleged ties to the PKK following the Cologne arson, the February attack earned a tepid response from France's politicians and press.

The attack on Zaman garnered posts from the Committee to Protect Journalists, International Press Institute and Reporters Without Borders, who urged police protection for the paper's journalists. "We are very worried by the growing violence of the attacks on Zaman," Reporters Without Borders said. "There is no justification for these grave acts of intimidation that could have had tragic consequences. We hope that the German and French police will quickly identify and arrest all those who organized and carried out these attacks."

There is no equating the vicious shooting at Charlie Hebdo to the damage sustained at Zaman. Beyond the atrocities committed at the satirical magazine, it also holds a greater influence in French society than the Franco-Turkish weekly with a circulation of roughly 12,000. The murder at Charlie Hebdo also represents an assault on a tradition held within the French press since the time of the Revolution: lampooning religious figures.

Still, when France turns a blind eye on one attack while claiming that another is a threat to freedom of the press, it treats Zaman's reporters like second-class citizens. So, arguably, the reaction to the Charlie Hebdo incident says less about the status of freedom of the press in France and more about its attitude toward immigrants. At best, the country ignores the struggles of its immigrant population; at worst, it is teetering on the brink of a dangerous xenophobic landslide.

In a 2012 interview, then-editor of Zaman's Paris bureau, Emre Demir, said France's response to the attack was indifferent. After the newspaper called several French politicians, many privately expressed sympathy but said they couldn't publicly condemn the attacks, he said.

When asked about the coverage of Charlie Hebdo, compared to the attention given to Zaman, Demir acknowledged his paper's stature.

"We are not in the same league as Charlie Hebdo," Demir told Mic. "But I think the French see this first and foremost as a conflict between two foreign communities. It's a problem of Turkey, it's not our problem."

Unfortunately, it makes sense that no one spoke up for Zaman at a time when xenophobia was swiftly creeping into the national mentality. With a spiraling economy and the presidential election in full swing, anti-Muslim sentiment bubbled to the surface of French politics in 2011. Incumbent Sarkozy was already tacking right, hoping to sweep away conservative votes from Front National candidate Marine Le Pen. In the first round of the election, she captured almost 18% of the vote, signaling growing support for her harsh immigration policies and nationalist views.

"The French see this first and foremost as a conflict between two foreign communities. It's a problem of Turkey, it's not our problem."

On Wednesday, Le Pen used the Charlie Hebdo tragedy to rally against radical Islamists. As the French economy has weakened under Francois Hollande's administration, Le Pen's idea of the Islamic immigrant scapegoat has gained traction. In France and across Europe, the attack on France journalists will likely embolden far-right activists and politicians who have steadily gained traction since the global financial crisis.

While Le Pen has taken an extreme stance against immigration, her attitude toward new ethnic groups is not far from the most basic French principles. The French do not create hyphenated identities, yet established citizens often do not acknowledge immigrants or their children as fully French either.

This apathy toward immigrant issues, born of out the French fear of communitarianism, is the beginning of a more extreme form of xenophobia. It not only stokes far-right politicians like Le Pen, but also has potential to radicalize immigrants who feel isolated and marginalized.

It's not enough for the French media to splash "liberté" across its headlines. Journalists must also espouse the other part of their country's motto: equality and brotherhood. No matter the size, slant or audience of a publication, Zaman and Charlie Hebdo should be treated as equals in the journalism community.

Instead, Zaman's reporters are left on the sidelines of French society. Its issues with Kurdish radicals do not belong to France, but to its mother country, Turkey. Its reporters may live and work in Paris, but they haven't quite earned the same freedom of the press rights as their established French colleagues.

Despite what the hashtags may say, not all journalists in France — or around the world — are Charlie Hebdo.