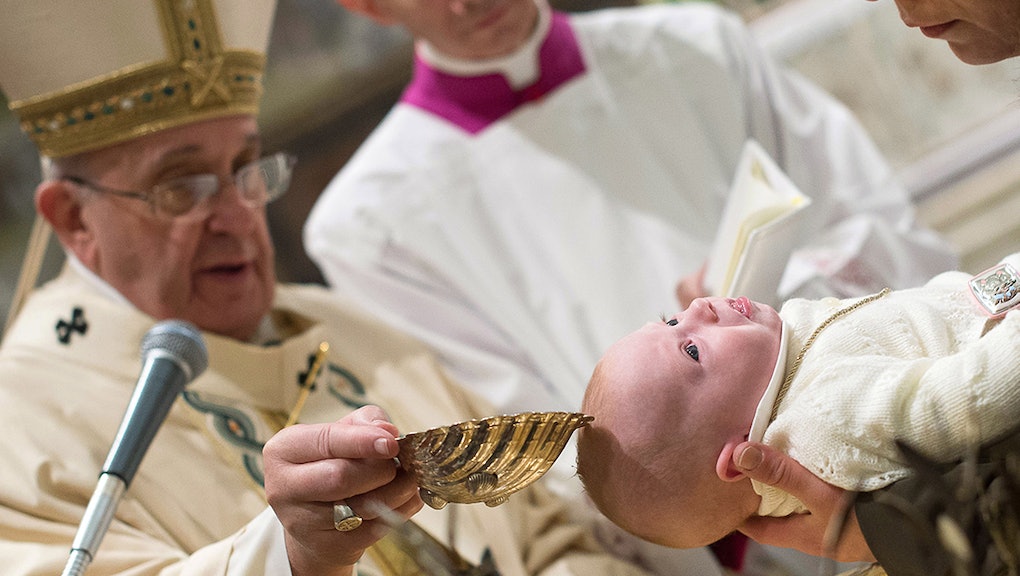 Pope Francis has officially made the Sistine Chapel a breast-feeding-approved zone, NBC reports, citing the troubles of poor women worldwide and "too many, unfortunately, who can't give food to their children."

While so many other people readily sneer at nursing mothers in public, Pope Francis readily welcomed the completely natural practice from visiting mothers.

"You mothers give your children milk and even now, if they cry because they are hungry, breastfeed them, don't worry," he said.

This isn't the first time Francis has endorsed breastfeeding. In 2013, he relayed his support of women's right to breastfeed in public to Italian newspaper La Stompa:

I said to her: "Madam, I think the child's hungry." "Yes, it's probably time..." she replied. "Please give it something to eat!" I said. She was shy and didn't want to breastfeed in public, while the pope was passing. I wish to say the same to humanity: "Give people something to eat!"

Technically, this makes the pope more liberal on breastfeeding than another Western institution: Facebook. Throughout 2014, the social networking site repeatedly removed pictures of mothers breast-feeding their children as a violation of Facebook's terms of service, only reinstating the photos under public pressure.

According to the Telegraph, Facebook had previously allowed images of breast-feeding as long as the nipples were "covered or concealed," but some images that did not contain nipples were removed by moderators nonetheless. It took a social media campaign using the hashtag #FreeTheNipple for Facebook to change its mind. A company spokesman conceded the point and announced the policy had been changed to "better examine the context of the photo or image," including by allowing fully exposed breasts to be visible in photos.

However, Facebook still occasionally issues bans in violation of its own stated policy. More broadly, women breast-feeding in public often attract undue attention. In 2013, a video of a woman being asked to "cover up" after another saw her breast-feeding attracted national attention. The same year, a New York Police Department officer verbally harassed a Sri Lankan mother and her family for the same reason. An Anthropologie store in Beverly Hills, California, was targeted for a "nurse-in" protest this year after an employee informed a mother to finish her breastfeeding in the bathroom or leave the store.

Why you should care: Pope Francis isn't an ally of women on everything, but it's good to know that he can agree: Breast-feeding in church isn't an issue of Christian modesty. Prudes more interested in policing women's behavior than respecting their needs as mothers can no longer count on the pope to reinforce tired old sexist attitudes on the subject.

Breast-feeding is totally natural. The pope's message to the haters is, essentially, deal with it.