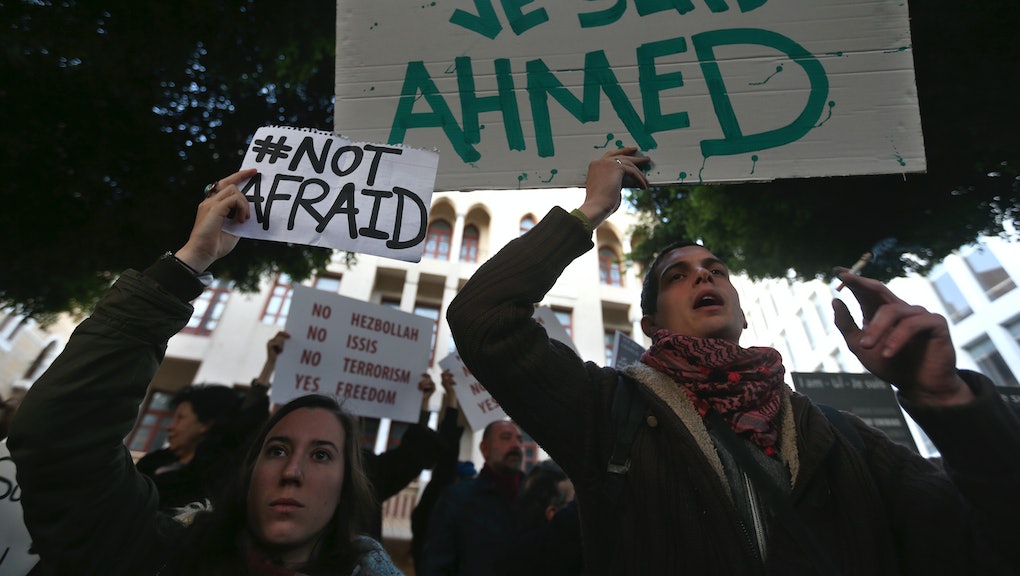 Officer Ahmed Merabet was one of the 12 people Islamic extremists killed in their assault on the Paris headquarters of satirical magazine Charlie Hebdo on Wednesday. Merabet, a devout Muslim, was murdered at point-blank range by the gunmen as they fled the scene and he attempted to stop them.

Now, his brother, Malek Merabet, has a message for the men who killed Ahmed and for the rest of us: Tolerance is the only way for mankind to live in peace, and terrorists do not represent the 1.6 billion Muslims worldwide.

The message: "My brother was Muslim, and he was killed by two terrorists, by two false Muslims," Malek told a group of relatives in Paris gathered for the funeral, the Guardian reports. "Islam is a religion of peace and love. As far as my brother's death is concerned it was a waste. He was very proud of the name 'Ahmed Merabet,' proud to represent the police and of defending the values of the republic — liberty, equality, fraternity.

Merabet's words were an appeal to those same French values and a reminder that the self-proclaimed champions of God who killed those innocent people only represented themselves and a virulent breed of extremism — they did not represent all Muslims.

Merabet then turned his focus to Saturday's extremists retaliating against French Muslims with a wave of violent reprisal attacks, of which at least 15 had been documented by anti-Islamophobia group MAMA U.K.

"I address myself now to all the racists, Islamophobes and anti-Semites. One must not confuse extremists with Muslims," Merabet said. "Mad people have neither color or religion.

"I want to make another point: don't tar everybody with the same brush, don't burn mosques — or synagogues. You are attacking people. It won't bring our dead back and it won't appease the families."

The slain officer's partner, Morgane Ahmad, added that "What the family and I want is for everyone to be united, we want everyone to be able to demonstrate in peace, we want to show respect for all the victims and that the demonstration should be peaceful."

Why you should care: As the aftermath of the attacks unfolds, aggrieved Westerners will likely demand to know why more moderate Muslims aren't speaking out against Islamic fundamentalism.

Of course, as the sacrifice of Officer Merabet and the words of his brother and partner demonstrate, they already are. They're joined by 120 Muslim scholars from around the world who denounced the shootings, as well as countless other Islamic societies, religious leaders and writers.

Foundation for Ethnic Understanding president Mark Schneier wrote in the Washington Post that ignoring the majority of Muslims who despise fundamentalist violence strengthens "extremism by perpetuating a false narrative of perpetual conflict between Islam and the West." Framing the Paris attacks as a clash of civilizations rather than the violent actions of a deranged group of extremists leaves out the peaceful Muslims working to prevent bloodshed, like Officer Merabet. It would be a shame to ignore his sacrifice.