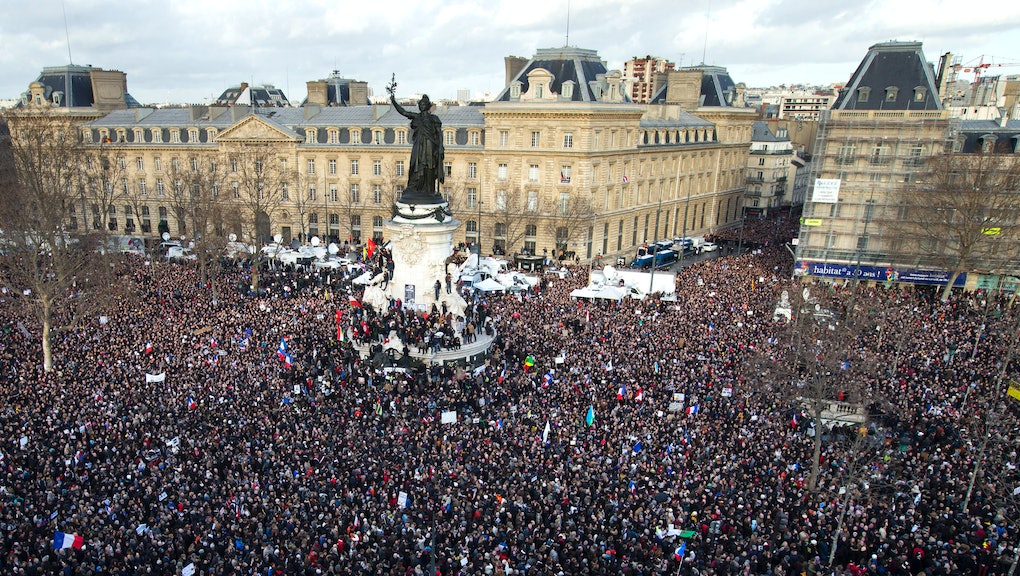 In response to the recent acts of violence in the city, millions of people marched in Paris and throughout the rest of France on Sunday to honor the 17 people killed in a string of shootings that rocked the city last week.

The #JeSuisCharlie solidarity movement marches grew so huge, it led to the Associated Press reporting the protest had become the largest in French history, while some estimates put the number of attendees at 1.5 million. By some reports, it's the largest rally in the country since the Liberation in 1944.

In all of France, that already massive number grew to an astounding 3.7 million people.

As the Blaze points out, considering the fact that France's population is roughly 66 million, roughly 2.5% of the country's population was together marching through the streets of Paris. It's an impressive feat, considering the short amount of time during which something like this could have been put together.

Take, for example, the National Mobilization Committee to End the War in Vietnam, the Alexanderplatz demonstration and the Tiananmen Square protests.

On Nov. 4 1989, as many as 1 million people marched in the Alexanderplatz demonstration for political reform and against the government in East Berlin. As one of the largest peaceful demonstrations in the nation's history, it helped lead to the fall of the Berlin Wall and German reunification but totaled just 1.3% of the country's then-78 million population.

And during the Tiananmen Square protests against the People's Republic of China leadership from April 15 1989 to June 4 1989, some estimate that as many as 1 million people people assembled in the square itself at the heigh of the protests. That's just 0.09% of the country's massive population.

And even if you consider all of those protests together, that's just 2.6 million people at the most, still well below the nationwide 3.7 million estimate.

Not only do their numbers add up, but it's also very possible France's #JeSuisCharlie marches could potentially have the same effect as these marches, all of which were major milestones in achieving the goals of their respective movements. Only time will tell if that's the case, but in the meantime we know for sure that people in France are angry, and they're standing up to tell everyone.