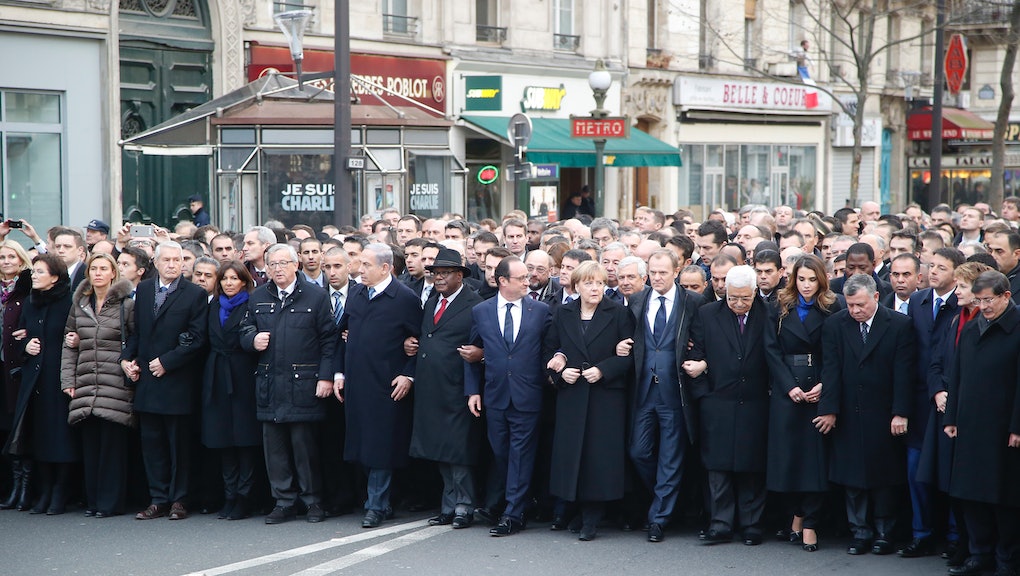 Millions of people took to the streets of Paris and cities across France on Sunday to rally in defense of free speech and against terrorism in the wake of Wednesday's deadly attack on satirical newspaper Charlie Hebdo. The French Interior Ministry told the Associated Press that 3.7 million marched throughout France, making the demonstrations the largest in the country's history.

Adding to the symbolic weight of the demonstrations, more than 40 world leaders joined the start of the Paris march, linking arms in an act of solidarity. But as Reporters Without Borders points out, their policies at home are far from compatible with the solidarity for free speech on display throughout France.

The organization said Sunday that it was "appalled by the presence of leaders from countries where journalists and bloggers are systematically persecuted such as Egypt (which is ranked 159th out of 180 countries in RWB's press freedom index), Russia (148th), Turkey (154th) and United Arab Emirates (118th)."

"We must demonstrate our solidarity with Charlie Hebdo without forgetting all the world’s other Charlies," Reporters Without Borders Secretary-General Christophe Deloire said in a statement. "It would be unacceptable if representatives of countries that silence journalists were to take advantage of the current outpouring of emotion to try to improve their international image and then continue their repressive policies when they return home. We must not let predators of press freedom spit on the graves of Charlie Hebdo."

They're right. In what can only be described as an epic series of 21 pointed tweets, London School for Economics Middle East Society co-president Daniel Wickham points out that many of the world leaders who marched Sunday through the streets of Paris are not the world's biggest advocates for press freedom.

These tweets point out the hypocrisy of government solidarity with Charlie Hebdo.

"Politicians worldwide are enacting a slew of laws to impinge on free speech, but are the first to defend it when there’s a body count," writes the Daily Beast's Luke O'Neil. "It is grandstanding for a right rarely protected unless under immediate attack."