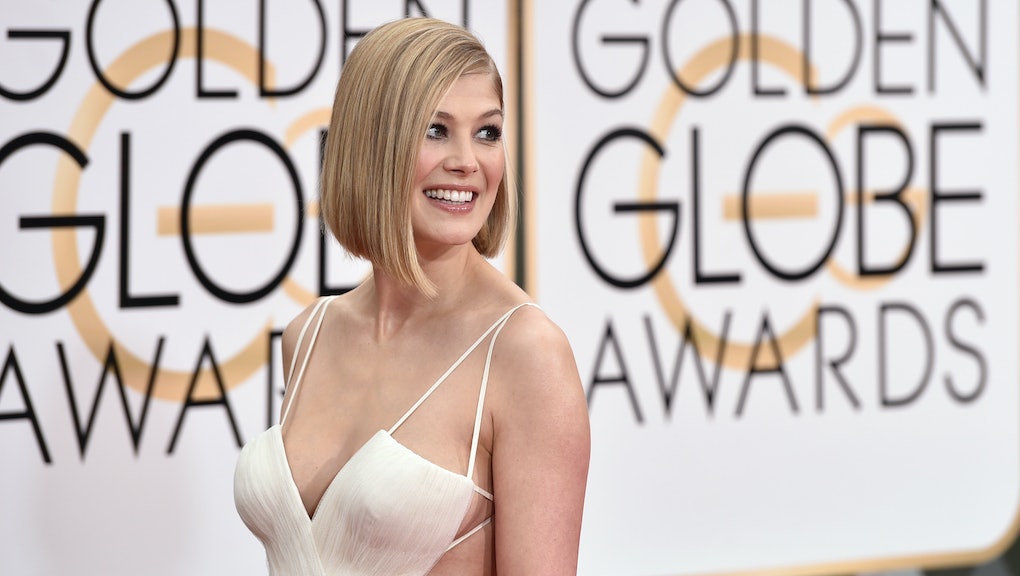 Within the first five minutes of the Golden Globes red carpet, America's viewing public was treated to a stark lesson on the unfair treatment of women's bodies.

As celebrities swarmed the red carpet in downtown Los Angeles, Twitter and fashion critics everywhere detected one of the first bad dresses of the night, courtesy of Gone Girl star Rosamund Pike. But oddly enough, many of the Internet's headlines and tweets decided to slather Pike with praise, using one word in particular: "brave."

You see, Rosamund Pike happens to have given birth to her second child five weeks ago — which apparently makes her choice of a skin-baring dress an act of sartorial heroism.

In reality, Pike's outfit choice left a lot to be desired from a fashion perspective. The white Vera Wang gown was a beautiful Grecian style, but it was noticeably ill-fitting; the slightly baggy top and droopy neckline were not the most flattering, and the overly loose bodice didn't help. As many fashion writers noted, when it comes to red carpet style, fit is key.

But what apparently stood out most about the dress was that its low neckline and cutouts showed off Pike's body — or more specifically, Pike's "post-baby body."

The coverage praised Pike for her oh-so-bold move, her "toned tummy" and her glowing look. Instead of discussing Pike's dress as a poor choice from an objective fashion perspective, Pike was treated to backhanded compliments: Showing off skin and exposing the curves of her figure, rather than tucking everything away under a shapeless muumuu or shift dress, was deemed a "brave" move.

It shouldn't be. Daring to walk outside with the body you have isn't a brave move; it's the basic right of being a human being.

But for women, particularly Hollywood's leading ladies, physical perfection is supposed to be a given. We expect women to maintain their best weight, to cover up any possible blemish, to smooth down any stray hair and any roll of fat or cellulite. We've been provided with all the tools, after all, with a $70 billion makeup industry, an even bigger anti-aging industry, an endless supply of weight loss products and the wondrous garments that are Spanx.

As Tina Fey quipped in her opening monologue at the Golden Globes ceremony on Sunday evening, "It took me three hours today to prepare for my role as human woman."

And while those tools at our disposal might all technically be optional, they send a clear message for women: They're there to use, especially if your appearance risks inching precipitously close to the edge of acceptable beauty standards.

That puts pregnant stars in an especially harsh spotlight, as their bodies inevitably change. Even Kim Kardashian admitted to feeling the pressure after getting pregnant with North, telling Elle UK, "After five months, I swore I'd never get pregnant again. I got so huge and it felt like someone had taken over my body. ... Sometimes, I'd be sitting there, nearly 200 lbs., crying and swearing this will never happen again."

It's not. Rosamund Pike chose to wear a body-baring dress because she liked it (her 5-week-old son apparently did too). If we're going to really respect her and treat her fashion move as an outfit choice, we'll call it out for the objective red carpet misstep it was, rather than praising her bravery for daring to show her body after the shocking act of giving birth.