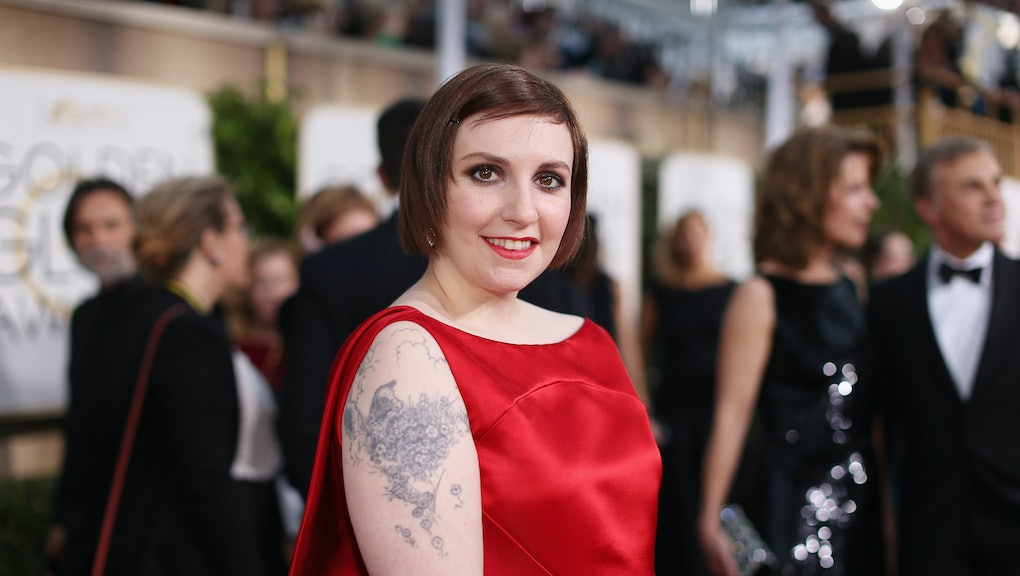 In her red carpet interview with E!'s Ryan Seacrest at Sunday's Golden Globes, Lena Dunham revealed that she deleted the Twitter app off her phone as a result of the online harassment she's received over the past couple of months, particularly after the publication of her memoir, Not That Kind of Girl, this fall.

"I deleted Twitter because I wanted to create a safer space for myself emotionally," she told Seacrest on the red carpet. Criticism has been particularly vicious, with online trolls deliberately conflating the artist with the art in their cruelty. "People, like, threaten me and tell me what a cow I am," she said.

Dunham's experience reflects most women's experience online. While the Girls creator still maintains her Twitter account (it's reportedly managed by her assistant), her decision to disengage from the flow of information on the ubiquitous social network epitomizes the pervasive amount of harassment women receive online, and how deleterious it can be to women's well-being.

According to a recent YouGov poll, 72.5% of trolling victims are women. A Pew study found that 50% of women, like Dunham, have been called offensive names and verbally abused online. Twitter, specifically, is notorious for turning its head the other way by not considering these threats harassment, even though it claims to forbid "targeted abuse."

What is particularly infuriating is that Dunham's harassers aren't just men. Women have been unrelenting in their criticism, which reads like jealousy. In fact, feminism has a term for this: "Trashing" describes the phenomenon of women cutting successful women "down to size." Instead of congratulating Dunham on her success as a young woman in the entertainment industry, this green-eyed monster has turned other women into trolls online. Because Dunham is a feminist and vocal proponent of women's rights, this breed of vitriol is particularly disheartening.

Twitter is harsh, especially for women. But it is infuriating to witness Twitter's response to Dunham's red carpet statement. From bitchy comments about her wardrobe to illogical comments about her memoir, the Twitterverse only proves Dunham's point: Women aren't always welcome on the Internet.