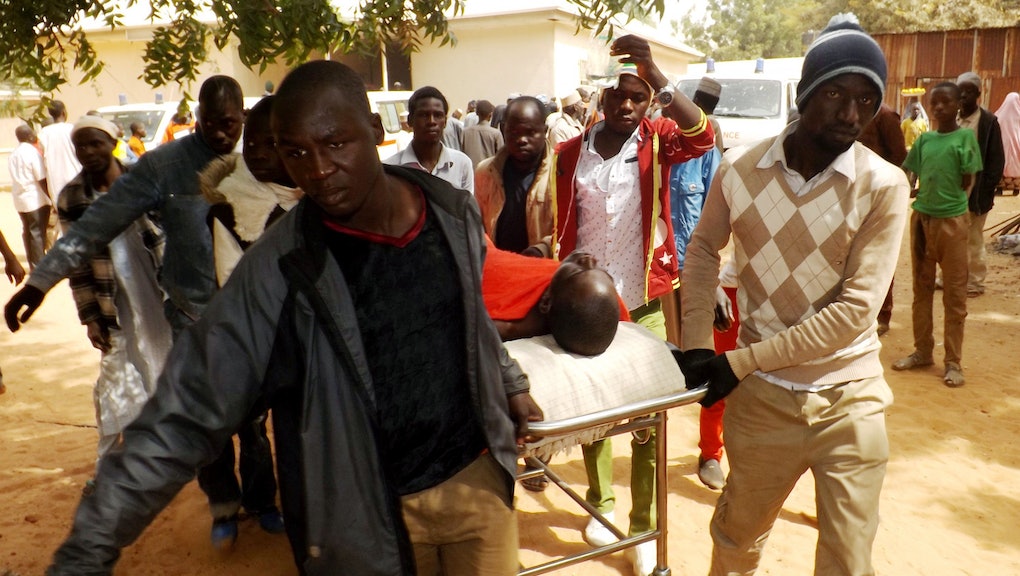 Terrorists Killed 2,000 People in Nigeria Last Week. So Why Doesn’t the World Care?

The past week has been one of horror for France. After a three-day rampage in which terrorists killed 17 people both at the Charlie Hebdo offices and at a Jewish kosher supermarket, one fugitive still remains at large. An estimated 3.7 million French citizens took to the streets of Paris in a solidarity march as the attack and its aftermath continues to dominate international headlines.

But thousands of miles away, another crisis went largely ignored. Boko Haram insurgents in Nigeria committed a massacre of unbelievable proportions in Borno State. Over the period of a few days, the terrorist group killed more than 2,000 people in the town of Baga, as well as 16 neighboring towns and villages, burning entire communities to the ground. Amnesty International described it as the terror group's "deadliest massacre" to date, and the Guardian reports that local defense groups said they gave up counting the bodies left lying on the streets.

Where is the international outcry for these non-Western and predominantly Muslim victims of terrorism? The terrorist attacks in Borno State and Paris unfolded over the same time frame, but the story in France generated more than 50 times more news stories worldwide.

This silence is not accidental. There is a clear double standard when talking about Western vs. non-Western and Muslim vs. non-Muslim victims of terrorism. Terrorists attacks on the West, and against non-Muslims in particular, are sensationalized in the media while those afflicting non-Westerners and Muslims are normalized and treated as business as usual, generating limited public interest and, in turn, limited outcry from activists and institutions that could actually affect change.

This discrepancy in coverage raises important questions about the way the media talks about terrorism — and whether the Western news outlets that so fiercely dissected the brutal Charle Hebdo massacre will ever see non-Western and Muslim victims of terrorism as "mournable." And the result is telling: Reports about non-Western victims of terrorism are generally overlooked or ignored unless they fit particular narrative of freedom and civilization under assault from Islamic extremism.

Is the attention on Charlie Hebdo really about the assault on free speech? Not necessarily. One day after the 10 white journalists were tragically murdered at Charlie Hebdo and became martyrs for "free speech," two Tunisian journalists, Sofiene Chourabi and Nadhir Ktari, were beheaded by Islamic State militants in Libya and received almost no coverage for their sacrifice.

Additionally, the Committee to Protect Journalists found that more than half of the journalists killed in 2014 were Muslim, even though the international media dialogue of the past year focused almost exclusively on the Islamic State's beheadings of white Americans James Foley and Steven Sotloff, as well as the deaths of other white journalists like Camille Lepage.

"More than half of 61 journalists killed in 2014 were Muslims, many working in conflict-affected countries such as Iraq, Syria, Pakistan and Somalia," writes Rafia Zakaria for Al Jazeera America. "But few have received the recognition or commemoration accorded to Western journalists or a handful who worked for Western media outlets."

If this were solely a question of who is fighting to defend "free speech," then international media would be honoring the sacrifices of the scores more non-Western and Muslim journalists who have died in the line of duty.

Most victims of terrorism are Muslim and non-Western, but we rarely pay them as much attention. A conservative estimate by the Combating Terrorism Center at New York's Military Academy at West Point found that between 2006 and 2008, non-Westerners made up about 98% of al Qaida's victims. A majority of those victims were Muslim.

An additional report this past year from the Institute for Economics and Peace's Vision of Humanity Project found that global deaths due to terrorism have spiked over the last decade. They were concentrated in Iraq, Afghanistan, Pakistan, Nigeria and Syria: all non-Western countries with large Muslim populations.

The report also explicitly linked the rise in terrorist attacks in these countries to the U.S.-led war on terror, but the media continues to explicitly omit or gloss over these victims of terrorism (unless their stories can be used to fuel Islamophobia).

The media still offers a skewed depiction of Muslims. For example, the media narrative about the French attacks gave short shrift to Ahmed Merabet, the 42-year-old Algerian Muslim security guard for Charlie Hebdo who was also killed, and focused instead on many of the white journalists and editors who died. Moreover, the international media at times explicitly omitted the Muslim identity of Malian Muslim Lassana Bathily, who saved customers during the siege of a Jewish kosher supermarket, while reiterating that the terrorists were "Islamists." When other outlets focused on this distinction, they treated it as a shocking revelation: A Muslim wanted to save Jews! How novel!

This is in stark contrast to the media narratives about Islam that do dominate international headlines. Western media fixated coverage last year on Malala Yousafzai, a young Muslim female activist from Pakistan who was shot by the Taliban on her way to school. Many media outlets used her story to advance one-sided narratives about Islam, the oppression of Muslim women and Pakistan more broadly, while glossing over her critiques of the U.S. drone program, which did not fit these narratives.

So what does this have to do with Nigeria? Boko Haram made international headlines in 2014 for kidnapping 276 girls from a school in Chibok in Borno State. Nigerian activists launched the #BringBackOurGirls hashtag campaign, demanding accountability from the Nigerian government.

The real story about Boko Haram and the Chibok girls could not have been further from the truth. Firstly, the Chibok girls, like the Boko Haram militants, are Muslim, and although the Taliban and Boko Haram are both terrorist groups that invoke "Islamist" rhetoric, the history of Boko Haram could not be more different than that of the Taliban. Moreover, Boko Haram regularly targets boys in its attacks, but this was also left out of the story.

The West and its media misconstrued the narrative and appropriated the #BringBackOurGirls hashtag as a "war on women" to justify an expanded Western military presence in the region. Months later, and despite dozens of troops from the U.S., France, Canada, Israel and the U.K. being deployed to region, none of the girls have been rescued by the military to date. If the global reaction to this weekend's slaughter is any indication, we've simply moved on from Nigeria's ongoing battle against militants in favor of more tantalizing topics.

Why it matters. Reports about non-Western victims of terrorism are typically restricted unless they can serve a particular agenda, and we saw that again this past week with the media's ominous silence around Boko Haram's massacre of thousands of victims in Borno State. There are no neat narratives surrounding this "Islamic war on women," and no Westerners were killed. It was simply terrorist violence on an unprecedented scale perpetrated against Nigerians, many of whom were Muslim.

We are still not sure of the full scale of the violence in Baga and neighboring towns just yet, but what we do know is staggering. Baga, a town of 10,000, is now "virtually non-existent" according to Musa Alhaji Bukar, a senior government official from the region. Hundreds of corpses are rotting and litter the streets. Entire towns and villages have been burnt down, and thousands of people have had to flee into Lake Chad where they face hunger, dehydration and attacks from wild animals while they await rescue on unstable sand bars. This is one of the worst terrorist attacks in history, and Boko Haram followed up on it by making a 10-year-old girl blow herself up in a market in Maiduguri this Saturday, killing at least 10 more people.

Just as people are now standing in solidarity with the French and decrying the terrorist violence that tragically took 17 lives, we must also stand in solidarity with Nigerians and decry Boko Haram's slaughter of 2,000. The lives of Muslim and non-Western victims of terrorism also matter, even if the mainstream media's omission of these stories may indicate otherwise.