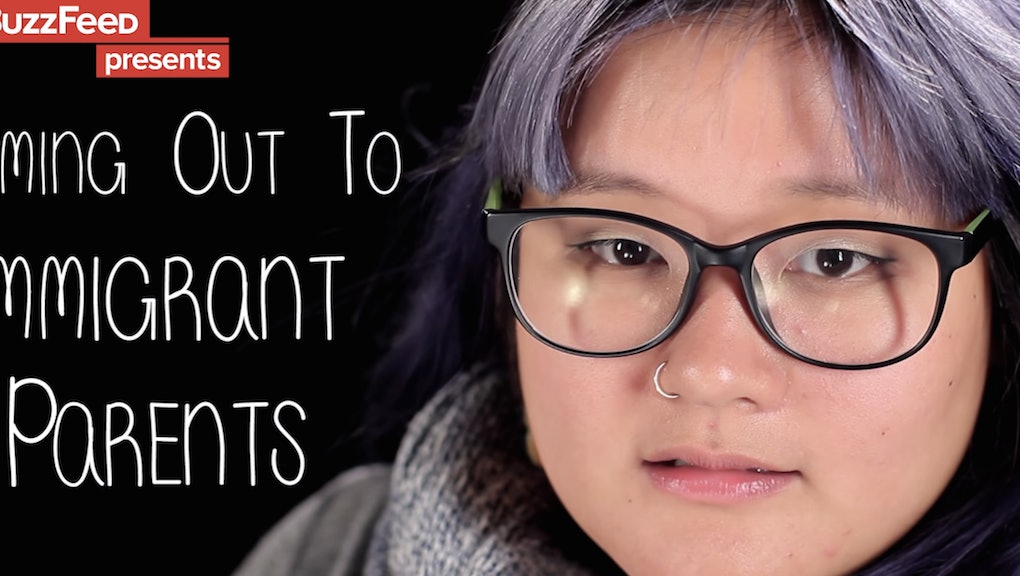 "As the kid of immigrants, it can be scary thinking, 'This part of me is different. And what if it changes the way that they see me?'"

In a poignant new video, BuzzFeed talked to young people who had to deal with the coming out process as first-generation Americans. With parents from Mexico, Vietnam, India and beyond, these youths faced added complexities in what's already a difficult and life-changing event. "My parents struggled with a lot in Vietnam, even just trying to come to America," a young man named Andrew says to the camera. "It does [play] a factor in how difficult it was for me to come out."

This video shows that a parent's love is key to a child accepting his or her own sexuality. For immigrant parents, one way to empathize with their children's fears is to try and relate it to their own situation — feeling like an outsider in a new land.

Parents' acceptance is crucial: Every child featured in the video expressed some fear about coming out, with their fear inevitably tied in varying degrees to their parents' acceptance of their sexuality. "My God, I was so scared," says Joel, the son of Mexican emigrants. For him and Rashmi, the daughter of emigrants from India, this acceptance unfortunately was not automatically forthcoming. Coming from conservative cultures steeped in religious tradition, their parents initially refused to accept them. Joel's mother, a devout Catholic, even "blamed" Joel's sexuality on his flagging faith. "'I think you're gay,'" Joel said, narrating his mother's rejection, "'because you haven't gone to church the last four years.'"

Rashmi, in a similar story of familial rejection, explains how this resulted in a breakdown of the bonds of trust holding the family together. "They were furious," she said. "They felt like they couldn't trust me anymore, and because of that I felt like I couldn't trust them anymore." Like Joel's mother, her parents also hoped their daughter would be able to overcome her same-sex attractions through therapy.

Sympathy makes a difference: While children are wary of adding another layer of stress to their parents' status as immigrants, this shared feeling of being outsiders can actually facilitate understanding and compassion. Sara and her mother Vivien explained how the two very different experiences are actually quite similar. "As an immigrant, she came here to the United States with two suitcases and $200," Sara explained. "She would be a natural fit to understand what it means to make a happiness on my own terms, or challenging my parents' idea of what happiness means in my life."

"That's been the hardest part: to feel valid in my own gayness," Priscilla says of the coming-out process. But the video's participants all share advice about how to feel validation, even when parents are less than accepting. Making sure you are ready and prepared for the worst is one part of it, but so is being at peace with your own sexuality before bringing it up to your parents.

In addition to utilizing a wealth of resources online, there are other ways to work through the process of coming out, specifically, as a child of immigrant parents. One of those ways is through art, such as Desiree Akhavan's new feature film, Appropriate Behavior, which focuses on a 20-something's struggle with coming out as bisexual to her Persian parents.

Resources, both entertaining and informational, are available for young people in need of help. As BuzzFeed's video demonstrates, parental love and acceptance are invaluable when it comes to coming out. But at the same time, LGBT youth should never feel alone. Whether their parents accept them or not, they are part of a vast community of like-minded individuals who are ready and willing to provide advice, commiseration and support.