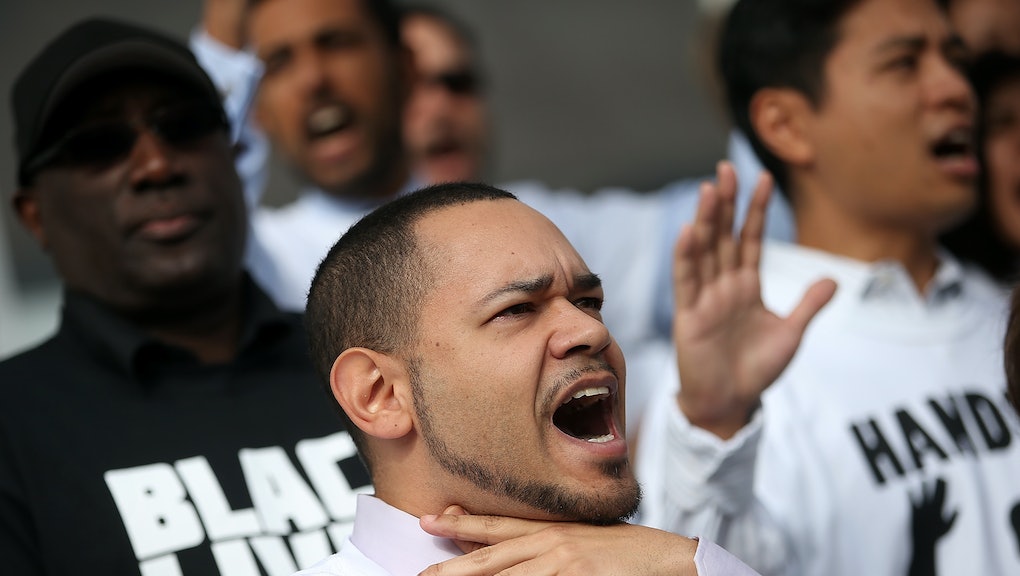 The first investigation conducted by New York City's police inspector general in the aftermath of the now-infamous Eric Garner chokehold case has concluded that the police department has neglected to follow its own guidelines when it comes to chokeholds — and the patterns of punishment for the officers responsible is sketchy at best.

Monday's report, carried out by the Office of the Inspector General, highlights 10 chokehold cases that occurred between 2009 and June 2014 and examined the circumstances and disciplinary processes of each. The inspector general's office found that in several of the cases, the officer in question "employed a chokehold as a first step to overcoming verbal resistance," despite the fact that chokeholds were banned by the New York City Police Department in 1993.

"While the substantiated use of prohibited chokeholds by members of the NYP in any context is troubling, the fact that several of the subject officers in the ten cases reviewed by OIG-NYPD used chokeholds as a first act of physical force and in response to mere verbal confrontation is particularly alarming."

The investigation also found that the Civilian Complaint Review Board, an independent city agency that handles cases of police misconduct, and the NYPD were on wildly different pages when it came to deciding what constituted a chokehold and whether officers should be held accountable.

As the New York Daily News notes, "In nine of the cases, CCRB recommended the toughest sanction possible, departmental charges. In every case, the cop got lesser punishment, ranging from no punishment at all to the loss of five vacation days."

Inspector General Philip K. Eure emphasized the severity of the report's findings. "These are pretty serious cases," he told the New York Times. "Obviously, we are going to be looking at a broader sample of cases to see if it's more systemic. But people should be troubled by the disconnect that we determined exists already in the disciplinary process."

Garner's death played a central role: The report comes as a direct response to the July incident in which a police officer placed Garner in a chokehold. Though his death was declared a homicide by a medical examiner, brought on by the compression of his neck and chest, a grand jury ultimately declined to bring charges against the officer responsible.

As the New York Times notes, the findings of the investigation were pushed back after two officers were killed while on duty in Brooklyn on Dec. 20. But the report also makes clear that the public outcry over Garner's death and the officer's subsequent non-punishment was strong enough to catalyze the investigation.

It was also accompanied by recommendations for the NYPD's future. "Even this limited review of the 10 most recent substantiated chokehold cases revealed that certain policy changes should be made," the report argues.

Why it matters: The justice system may have failed Eric Garner and other chokehold victims, but Monday's report is, at the very least, an acknowledgement of that failure. It's particularly damning given the police department's recent antics, including a work stoppage and claims that the "blood on the hands starts on the steps of City Hall in the office of the mayor."

Sadly, the biggest takeaway of the investigation may be that cases like Garner's are not all that uncommon, and that any expectations the public may have had in regards to justice were likely misplaced.

Conor Friedersdorf at the Atlantic sums up the report's implications:

"New York City is policed on the theory that if small transgressions against law-and-order go unpunished, the ensuing disorder will result in a city where more serious crimes like homicide are more common. The NYPD flagrantly failed to police itself as officers engaged in violations of chokehold policy.

Eure and his team have included a promise to fully investigate alleged police misconduct in future reports. The rot in the NYPD runs deep, however, and it remains to be seen how exactly we can rid the country's largest police departments of that.