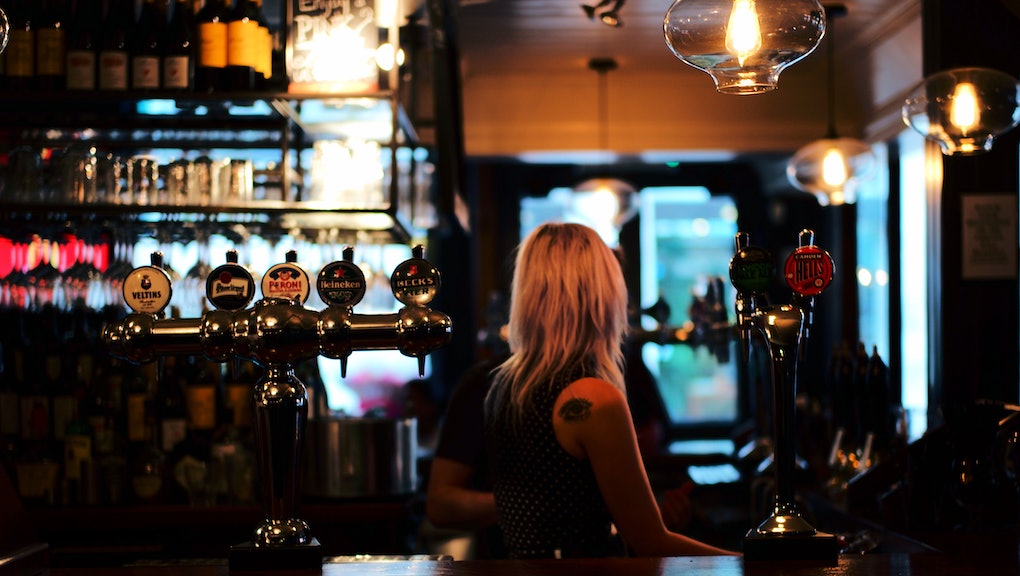 Few people possess the romantic insight of bartenders. Each night, they bear witness to first encounters and clumsy pick-up lines, bickering couples and drunken banter. Bartending is a job, yes, but also a profound window into the realm of dating.

And despite having to behold endless Tinder dates gone sour, most bartenders relish their position.

"Behind the bar is the best seat in the house," says TJ Lynch, co-owner and bartender at Mother's Ruin, a Lower Manhattan spot that serves snacks and boozy slushies. "You get to hear and see a hundred times more human interaction than most people. Observing human nature is the best show in town."

And if observing leads to action, we can assume the bartenders are probably the best daters in town — that is, if they take their own advice. For some real talk on what makes a good date (and a terrible one), Mic spoke with mixologists who sling drinks in Brooklyn's youngest neighborhoods, in downtown Chicago and in the cramped bars of Manhattan.

Here's what they had to say:

Don't talk about your ex or make a mess.

It might seem obvious, but: Don't talk about your ex. "I have seen a lot of people bring up their old relationships," says Jay Zimmerman, a 16-year veteran and the co-owner of Sekend Sun in Queens and basik in Brooklyn. "You kind of cringe when it happens."

Franky Marshall, a bartender at Dead Rabbit in Manhattan, sees it too. "Don't go on tirades about how horrible [exes] were, or, alternatively, how great they were and how sad you are that things didn't work out," she says.

Antonia Greco, a dating coach and a bartender at Brother Jimmy's BBQ near Madison Square Garden, says each sex seems to have their own set of faux pas. One common female misstep: trying to play the Cool Girl. "The worst is when [women] try to get competitive with drinking," she says. "It usually doesn't make for good decisions... or good conversation." For the men, it's sloppiness — like messily devouring wings only minutes after meeting: "It's disgusting when you couldn't care less how you're coming off."

But one cardinal sin beats the rest, according to Lynch: "Please stop chewing gum at bars and restaurants. It's gross."

Do not, for the love of God, look at your phone.

"There's a lot of Tinder right now," says Miranda Breedlove, a mixologist at Trellis in Chicago. "'Tinder Tuesday' is kind of a big thing."

It's a trend Lynch says is growing too popular: "Tinder dates are becoming nauseatingly frequent." And while not every date initiated on Tinder is bad, the randomness of the app makes for some unfortunate setups. While some Tinder rendezvous are palatable, others veer into farcical territory — like when one person boasts about his socialite status, insults women and cruises Tinder while his date uses the restroom.

And what of that rude practice of paying more attention to a screen than the date? "I'm always amazed to see how often people check their phones, even though their attention should be on their dates," Marshall says. "Concentrate, people!"

Try to have some semblance of good, old-fashioned manners.

Chivalry may not be what it once was — for many, it's an unwelcome relic of the past, or outright suspicious. But there should still be room for common civility, for both men and women.

"I rarely see guys hold doors for their dates," Lynch says. But he's not so quick to condemn the male suitors outright — it may just be generational. "I blame the parents," he says.

There's hope, though. Breedlove says some dates will call ahead so there's champagne waiting. And Greco reports the rare suitor will still pull out a chair for his date. "I think it's sweet when the guy acts like a gentleman," she says.

Remember, it's all about that first impression.

Breedlove has a favorite story that involves alcohol, a jilted date and flapjacks. A couple on their first date (arranged through Tinder) showed up at Trellis for brunch. The lady arrived 45 minutes late, and immediately set to work.

"She started chugging mimosas," Breedlove says. "To the point where she was there half asleep over the pancakes that she made him cut up for her."

The man made a sly escape: He slipped into the bathroom while the chef played the part of bouncer and ejected the drunken date. "He still comes in every once in a while and we joke about it," Breedlove says.

The simplest moves are the most charming.

It's not all horror stories. "We've had couples [who] had their first date at Trellis and they're getting engaged now," Breedlove says. "It's really incredible to see."

As for charming your date, Zimmerman says the simple stuff works best. "Being inquisitive is a really sweet gesture that most people shy away from," he says. "It's a great way to learn about someone."

Marshall says a sense of adventure is sweet too.

"It's nice to see when one person will get out of their comfort zone and try something new for the sake of pleasing the other person," she says. "For instance, ordering a particular cocktail or a whiskey because that's what the other person is drinking."

"[It] shows your willingness to compromise, which is a good sign," she adds.

Because when it comes down to it, dating isn't rocket science — it's about being polite, charming, thoughtful and not an asshole. Now that wasn't hard, was it?