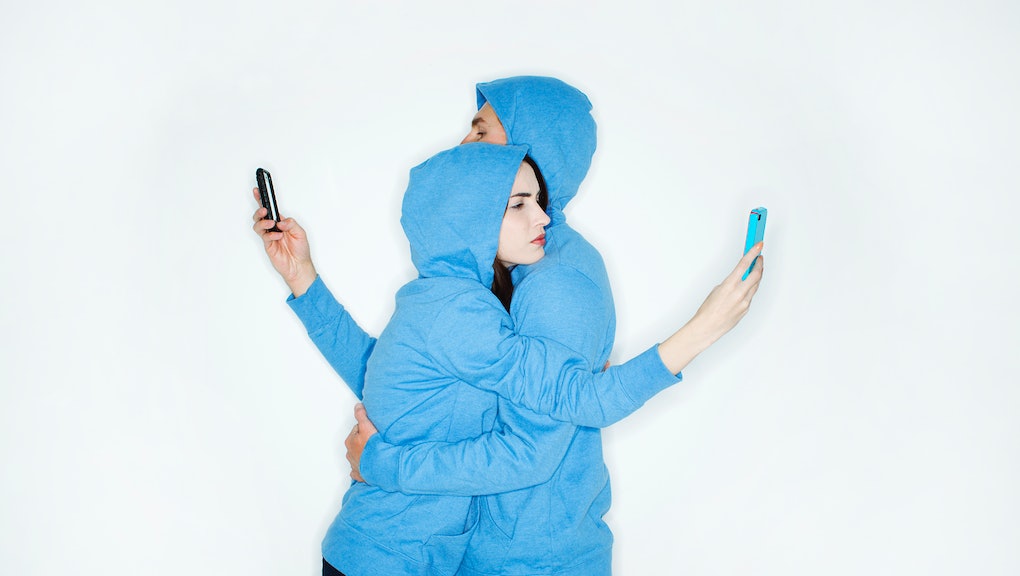 Here's Scientific Proof Your iPhone Is Literally Driving You Crazy

The symptoms of the sickness are almost immediately recognizable. Sufferers report anxiety, distraction, disengagement and phantom sensations that drive them insane.

The diagnosis? iPhone separation anxiety. According to a new study, the phenomenon actually exists — and its effects are pretty dismal.

New research by the University of Missouri found that being separated from your phone — even for short periods of time — leads to "physiological anxiety" and "poor cognitive performance." Moreover, we're so attached to our iPhones that being apart from them can make us feel a "lessening of self," Huffington Post reports. We may joke about being addicted to our devices, but if the science is any indication, it's a reality: Americans simply can't function without their phones.

The science: Researchers ran two experiments on a group of 40 iPhone users. First, the participants sat in a cubicle and completed a puzzle while they had their phone with them. For the second experiment, participants completed another puzzle — but this time their phones were moved away from them and relocated elsewhere in the room.

Researchers then called the phone. Participants could see and hear their phone ringing, but they could not answer it. While both of these experiments were going on, researchers were tracking the participants' heart rate and blood pressure.

When participants were separated from their phones, they "experienced 'significant' upticks in anxiety, heart rate and blood pressure." Moreover, they also "got worse at completing the puzzle."

"Our findings suggest that iPhone separation can negatively impact performance on mental tasks," the study's lead author, Russell Clayton, said. "Additionally, the results from our study suggest that iPhones are capable of becoming an extension of ourselves such that when separated, we experience a lessening of 'self' and a negative physiological state."

Are we doomed? Scientists' advice on how to counteract separation anxiety-induced distraction might be surprising — just keep your phone with you. "Our advice would be to carry your iPhone with you, but to silence your phone during cognitively demanding tasks (i.e., work, meetings, exams, etc.) in order to avoid any potential distractions that may reduce your attention during the day," Clayton told Huffington Post.

Absurd as it all may seem, at least now there's some science to back it up and let you know that it's not all in your head. As much as we can't live with our cell phone, we definitely can't live without it.