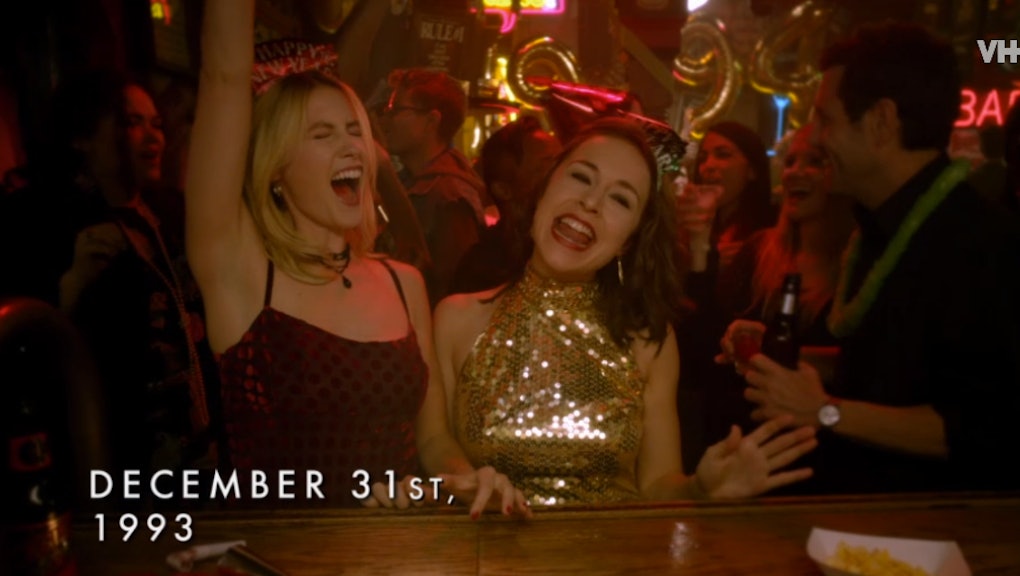 Why Everyone Should Be Excited About VH1's 'Hindsight'

Say you got a second chance in life, not just a new beginning but a way to rewrite your biggest decisions. Bonus benefit: You'd get to relive your favorite decade in pop culture too. How would you handle it? In a throwback of insanely nostalgic proportions, VH1's new series Hindsight asks all these questions, while reviving the '90s in a refreshing and self-aware way.

On the eve of her second wedding, Becca Brady is having doubts, not just about the man she's about to marry, but about the decisions that have led to the rocky place she's at today. Her boss takes total advantage of her, her parents are divorced (with her dad's younger flame expecting) and she hasn't talked to her best friend Lolly in years. The soon-to-be bride passes out, only to wake up on the morning of her first wedding — in 1995.

In VH1's first attempt at a scripted series, nostalgia draws in lovers of the decade. It's a perfect fit for the network that brought us throwback shows I Love the '90s and I Love the '80s. All the clogs, VCRs and Walkman players remind us just how awfully awesome the decade was. But the heart of the show is Becca's shot at a second chance.

Hindsight doesn't make Becca's ability to alter history too serious. So many time travel stories focus on panic about messing up the timeline and spinning the world into chaos. Becca isn't worried about catastrophes; she's mostly just concerned with staying best friends with the lovable and wacky Lolly (the one person who believes her), sticking it to her boss and fixing her love life. She just accepts that she's been given another chance and doesn't waste her time trying to get back to 2015.

We're a generation plagued by "what if" questions: How would our lives have been different if we had chosen a different college? What would have happened if we had taken that job in San Francisco after all? Would things be different if we hadn't broken up with a certain somebody? Becca's about to find out, and that's what's so charming about Hindsight.

The show does have some areas to improve on. Its reliance on voiceovers comes off as cheesy and tired, and Becca's moments of introspection, in which she's deciding whether or not to make a different decision, are indulged for too long.

We've seen similar plots in the likes of Big, Back to the Future and 13 Going on 30. But while Hindsight still relies on Becca breaking the news about the future to the people of '95, it doesn't mean it's any less enjoyable. Lolly, just like everyone else, is surprised that Patrick Dempsey becomes the hottie he is today. She's also disappointed that people don't use AOL anymore (many of us in 2015 are still getting over that as well).

The show is smart to tap into nostalgia, with the Backstreet Boys and Britney Spears still making headlines. And Hindsight's hook works twofold: Watchers who actually remember the age of smoking in bars get to genuinely reminisce, while younger viewers who live in a pop culture landscape drenched with '90s references get dialogue and sets that actually paint a picture of the decade.

The show has a lot of space to grow. Now that they've set up Becca's time travel, hopefully Hindsight will focus less on her adjustment to being back in the '90s and more on using what she knows to mix things up what she thinks is for the better. At the same time, that doesn't mean there won't be consequences for the new decisions she's making. And that's what we're eagerly waiting to watch.