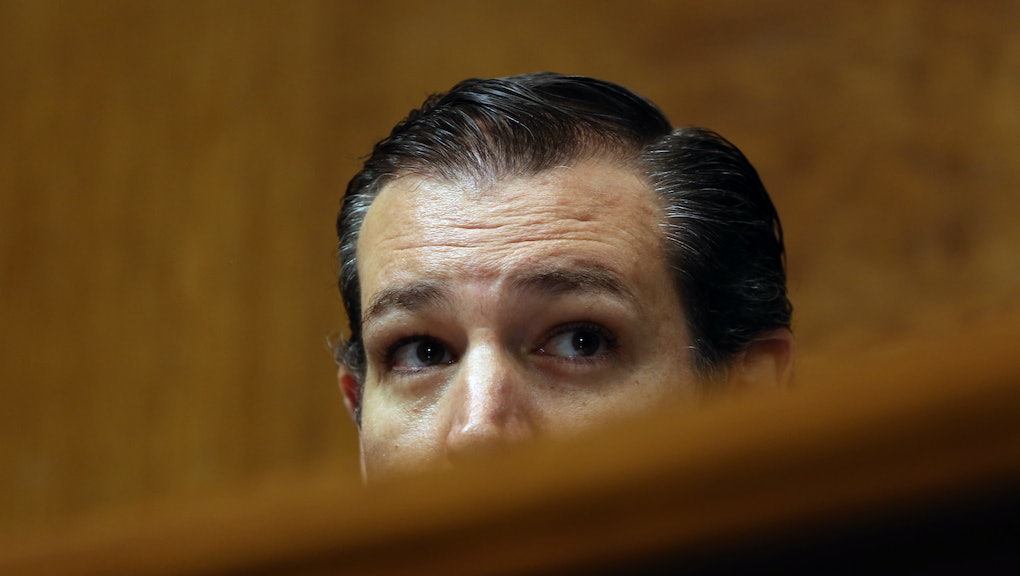 One of the most important science jobs in Congress has just gone to the worst possible candidate: Texas senator and science-denying arch-conservative Ted Cruz.

As the new Republican majority takes over the Senate, they've put Sen. Cruz in charge of the Senate Subcommittee on Space, Science and Competitiveness, effectively giving him the reigns of NASA. The appointment is sure to be a disaster for both NASA and American scientific endeavors in general, and is yet another sign that the GOP is doubling down on its aggressive opposition to scientific research that doesn't toe the Republican Party line.

Why the job is so important: The subcommittee chair is directly tasked with overseeing NASA. As Scientific American's Joshua A. Krisch notes, the position has a huge impact on the country's scientific and research programs, and "controls funding for green technology, aeronautical and space sciences, atmospheric and weather sciences and scientific research and development (there's some overlap among committees)."

NASA is one of the most important agencies tasked with monitoring global climate change (something many Republicans adamantly ignore) , as well as the sole U.S. government agency capable of taking humans to outer space.

Krisch adds that Cruz's Democratic predecessor, Sen. Jay Rockefeller, took steps to provide more scientific grants to under-served states, Internet connections for more public schools and investment in the science, technology, engineering and math sector. Cruz can have just as big an impact, though it's almost certain to be a disastrous one.

Why Cruz is the worst possible choice: To start, he's a steadfast global warming denier, refusing to even acknowledge that the global climate is changing or that human industrial and agricultural activity is to blame.

"It is not -- you know, you always have to be worried about something that is considered a so-called scientific theory that fits every scenario. Climate change, as they have defined it, can never be disproved, because whether it gets hotter or whether it gets colder, whatever happens, they'll say, well, it's changing, so it proves our theory," Cruz told CNN.

To this end, bills Cruz has proposed would further deregulate the energy sector, allowing for a massive increase in America's CO2 emissions, which, whether Cruz understands it or not, could have dire implications on the planet's already faltering climate issues.

Other platforms for problems: Cruz's ignorance extends to virtually every technical issue. In just one example, he doesn't understand what net neutrality is. In 2013, he suggested that Bruce Willis testify before Congress on the threat of rogue asteroids (because he starred in Armageddon). He proposed cutting NASA's budget further, despite the fact that existing cuts are threatening the agency's scientists' ability to do their jobs.

The senator also has a complete disregard for the workings of government when it's politically advantageous for him to act like a wrecking ball. As one of the key engineers behind the 2013 government shutdown, Cruz has already done massive damage to scientific endeavors nationwide. Scientific American reports that the shutdown disrupted National Institutes of Health cancer trials, consumer safety organizations and key NASA tests for the James Webb Space Telescope. In doing so, he sabotaged sensitive experiments and likely hurt or killed people scientists and regulators were trying to protect.

Why you should care: With this nutjob in charge, NASA could see some serious risks to its future as a federal agency. Cruz could single-handedly throw off NASA's plans to send humans to Mars by the mid-2030s, not to mention severely undercut its role as a climate change watchdog. In the meantime, 2014 was likely the hottest year in recorded human history.

Cruz's anti-science colleagues include Sen. James Inhofe, who plans on running the Senate Environment and Public Works Committee like a "one-man truth squad" devoted to debunking global warming. The new GOP Congress is a wet dream for climate change deniers, and a looming catastrophe for the rest of us.