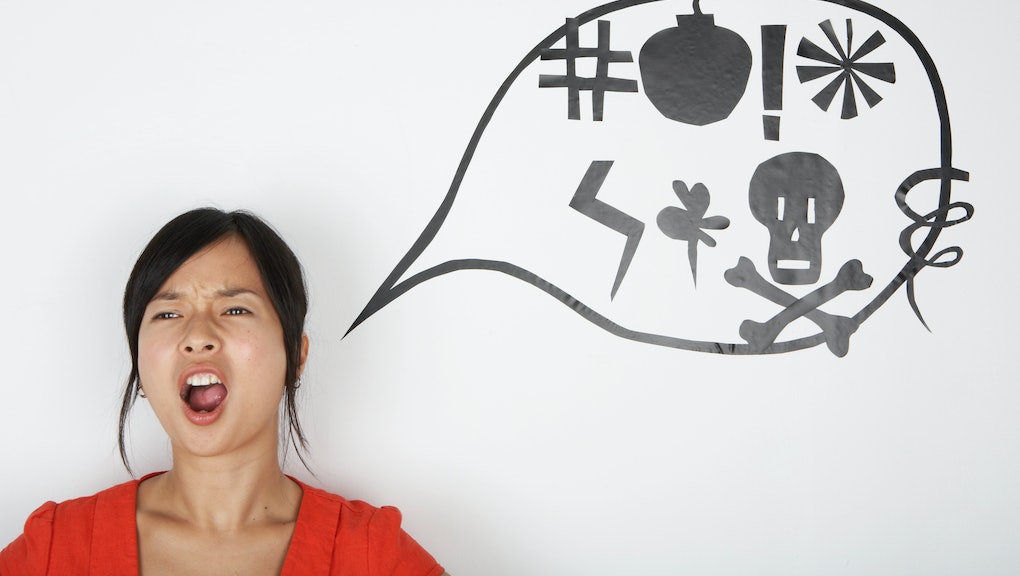 Science Has Fucking Amazing News for People Who Curse

When you stub a toe, miss a train by mere seconds or send an accidental "reply-all," there's a good chance you'll reflexively blurt out an expletive or two — and there's no reason to feel bad about it. While spewing profanities may offend disciples of Emily Post, it turns out that cursing is a pretty healthy habit. Research suggests that using four-letter words to express pain may inadvertently help alleviate it, whether we're reeling from physical anguish or emotional upset. How fucking convenient.

If it hurts, go on and curse. Dropping f-bombs helps us withstand physical pain, according to a 2009 study in which U.K. researchers from Keele University conducted a different kind of ice bucket challenge. Participants had to dunk their hands in ice water until the discomfort grew unbearable. Half of the participants could repeat their obscenity of choice during the experiment, while the other half had to endure the pain without letting curses fly. As researchers predicted, the profane group lasted longer. Repeating "fuck" and "shit," researchers believed, helped people get through pain by distracting them from it.

As a pain management tool, cursing may do more for people who drop f-bombs sparingly. In a follow-up study, researchers found that people who swore less on a daily basis derived more benefit from cursing their way through unpleasant sensations.

Colorful cursing: When you're all worked up, the same team of U.K. psychologists believe, cursing is basically a harmless way to muster up emotional resilience. But what we consider profanity changes as language evolves. If a word loses its shock appeal, it probably loses its ameliorative power. It's a good thing that we're so creative when it comes to cursing. In a study published last year, researchers asked participants to play either an aggressive video game or a more sedate golf game. People who played the aggressive game, researchers found, came up with a wider variety of obscenities on request.

"Our study found that when we raised people's emotional arousal level they became more proficient at swearing such that they were able to produce a greater number of different swear words and expressions in a one-minute period," said one study author, Amy Zile, in a statement to the British Psychological Society. "This provides experimental support for the theory that swearing is emotional language."

So the next time you've messed up or are feeling screwed over, don't be afraid to let one fly -- it might just be the best thing you can do for yourself.