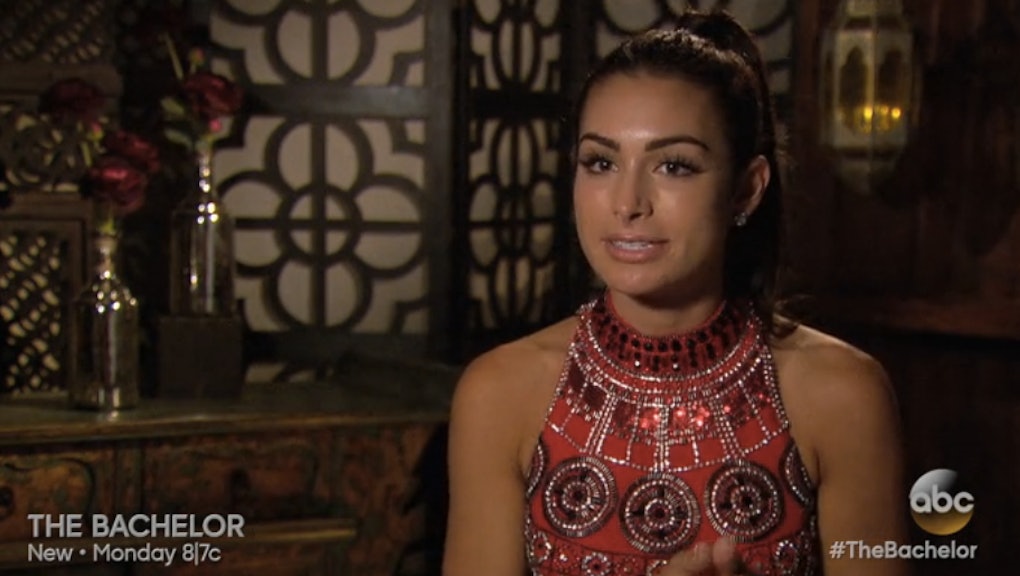 That's the swift and bizarre reaction contestant Ashley I. got on Monday's episode of The Bachelor when she told her fellow contestants she's a virgin. She presented the information with a laugh clearly laden with insecurity: "I'm like not even kidding, I am."

But she needn't be so nervous, apparently: Her Bachelor pals assured her that her virginity is an asset, one she can wield in her fight for Chris Soules' affections.

According to The Bachelor, virginity is one of the most valuable possessions a woman has, and the most empowering thing she can do is find a man who wants to take it.

Being a virgin is a good thing — as long as guys are into it. Despite Ashley's concerns, Mackenzie is immediately jealous of her virgin status because, as she explained sagely, "He will like it. Every guy likes it. Because guys like taking your virginity," adding, "It's going to make you stay here [in the competition] so much longer." Being a virgin is a tantalizing asset for someone like Ashley — gorgeous, confident and undeniably sexy, but not yet tainted by actual sex.

By linking the value of her virgin status with Chris' approval, Ashley's own sexual choices are suddenly not her own decisions; they are calculations made with men in mind. Here, her virginity is seen as a power to be wielded in her fight for Chris.

In another context, it might be seen as a detriment, warding suitors away for fear that she's too prudish, uptight or traditional.

Either way, Ashley's decision to have sex or not has less to do with her and more to do with how men will view her. And it's not necessarily the Bachelor women's fault that they all espoused the views they did, Ashley included. The belief that a woman's virginity is never just about sex is one of society's most deeply held — and it's almost always tied up with a heavy dose of judgment.

If you're a virgin, you better not be sexual. That judgment can be a cruel, double-edged sword. The Internet's reactions to Ashley's confession were immediately incredulous, highlighting the impossible double standard with which we judge women's sexuality: The opposite of virgin is slut. If you're a woman who's open about her sexuality and sex drive, you can't possibly be a virgin.

The thin line women are expected to walk — between innocence and worldliness, purity and sexiness — is not only an elusive impossibility; even women who haven't had sex can have sex drives, and women who do have sex can't possibly be summed up by any single term, especially "slut." The current standard leaves no room for women to simply explore their sexuality as they please without getting judged at every turn for what they do or don't do.

Sex is an important part of life — for those who choose to embrace it. For those who choose not to, well, that's their decision. But it's a personal choice either way, not a personality quirk or a liability or an appealing character trait on a dating profile. In fact, virginity isn't really anything at all except society's way of judging a woman who hasn't yet had the kind of sex with a man we all talk about on TV.

Based on the Bachelor episode, we're still a long way away from getting that message across the wires in time for the "fantasy suite."