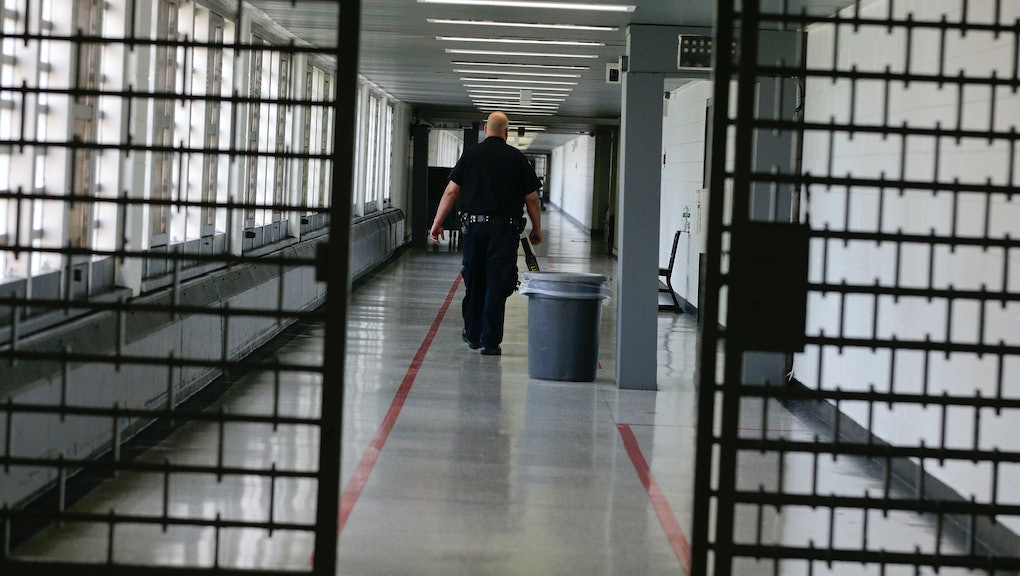 New York City on Tuesday took the lead in a national movement to ban the use of solitary confinement as punishment for young inmates.

A deal approved unanimously by the Board of Corrections will protect prisoners under the age of 21 from what a growing chorus of critics calls a violation of their basic human rights.

As part of the agreement, which comes into effect in 2016, correctional facilities will also be forbidden from holding inmates of any age in isolation for more than 30 consecutive days. The concessions come under pressure from civil rights groups that have brought a series of lawsuits against the city in response to gut-wrenching reports of abuse and neglect at the Rikers Island jail, which holds an average of 11,000 people.

The New York Civil Liberties Union welcomed Tuesday's announcement, which had initially been met with tough opposition from City Hall, but warned that additional measures were necessary.

"An institution as profoundly broken as Rikers Island will require wholesale reform to transform into a humane environment that emphasizes treatment and rehabilitation over punishment and isolation, and these rules are a major step forward," NYCLU Executive Director Donna Lieberman said in a press release published minutes after news of the agreement was first reported by the New York Times.

The city ended the use of solitary confinement for 16- and 17-year-olds in December.

Life inside "the box": In March 2014, the Center for Investigative Reporting first spoke with Ismael Nazario, a former teen inmate at Rikers who had endured a number of lengthy stays — one, he says, as long as four months — alone for "23 hours a day in a 6-by-8-foot cell."

At Rikers, Nazario said, they call it "the box."

"You just get angry with hearing people constantly hollering all day. There's so many people that have been in that cell and screamed on that same gate, it smells like a bunch of breath and drool," he told CIR. "There came a time when I cried when I was on Rikers Island, in the box, when I was there by myself. There's times, you know, sometimes you need a good cry."

"Nationwide, more than half of all suicides among detained juveniles happen while they're in isolation," the CIR's Daffodil Altan told PBS in February 2014. That is among the reasons, Altan explains, that the United Nations now describes solitary confinement as a form of torture.

The American Civil Liberties Union, with its partners at Human Rights Watch, spoke to a number of teens and their families about the exponentially debilitating effects time in solitary can have on a young person's psychiatric state. The report, called "Growing Up Locked Down," visited prisons in five states and spoke to inmates in 14 others.

"Cruel and Unusual": An official from the U.S. Department of Justice, Robert L. Listenbee, wrote in a letter to the ACLU in July 2013 that his office had concluded the "isolation of children is dangerous and inconsistent with best practices and that excessive isolation can constitute cruel and unusual punishment."

In 2011, Listenbee's boss Attorney General Eric Holder commissioned the National Task Force on Children Exposed to Violence. A little more than a year later, it released a wide-ranging study featuring a whole chapter dedicated to hidden dangers in the juvenile justice system. Among the most alarming passages is one that details the effect isolation has on young inmates:

"Nowhere is the damaging impact of incarceration on vulnerable children more obvious than when it involves solitary confinement. A 2002 investigation by the U.S. Department of Justice showed that juveniles experience symptoms of paranoia, anxiety, and depression even after very short periods of isolation. Confined youth who spend extended periods isolated are among the most likely to attempt or actually commit suicide. One national study found that among the suicides in juvenile facilities, half of the victims were in isolation at the time they took their own lives, and 62 percent of victims had a history of solitary confinement."

But, as the report also notes, simply ditching isolation does not go far enough. The exposure of young inmates to older, more violent offenders — and the prison guards — creates a new set of dangers. A stunning report filed by U.S. Attorney Preet Bharara in August 2014 described the terrors faced by young people on Rikers Island.

"Inmates see others being beaten and attacked and are afraid that they will face the same fate. [...] Simply put, Rikers is a dangerous place for adolescents and a pervasive climate of fear exists," Bharara's investigators found. In a statement to the press, Bharara emphasized, "It is a place where brute force is the first impulse rather than the last resort, a place where verbal insults are repaid with physical injuries, where beatings are routine, while accountability is rare."

One teenage inmate, who was on suicide watch, "sustained bruises to his left and right shoulders, left and right lower arms, chest area, neck, middle back, and a finger on his right hand, as well as an abrasion to his right elbow," after being "taken down by a Captain" for being "disruptive" on the line for the dining hall.

This is the challenge facing New York City corrections officials and Rikers Island in the coming months and years. The ban approved Tuesday does not go into effect for nearly a year, and even then, there is no real plan — nor a proposal to create one — for protecting young inmates from falling deeper into a violent culture of incarceration. How and where to create those safe spaces for education and rehabilitation remains an open question.