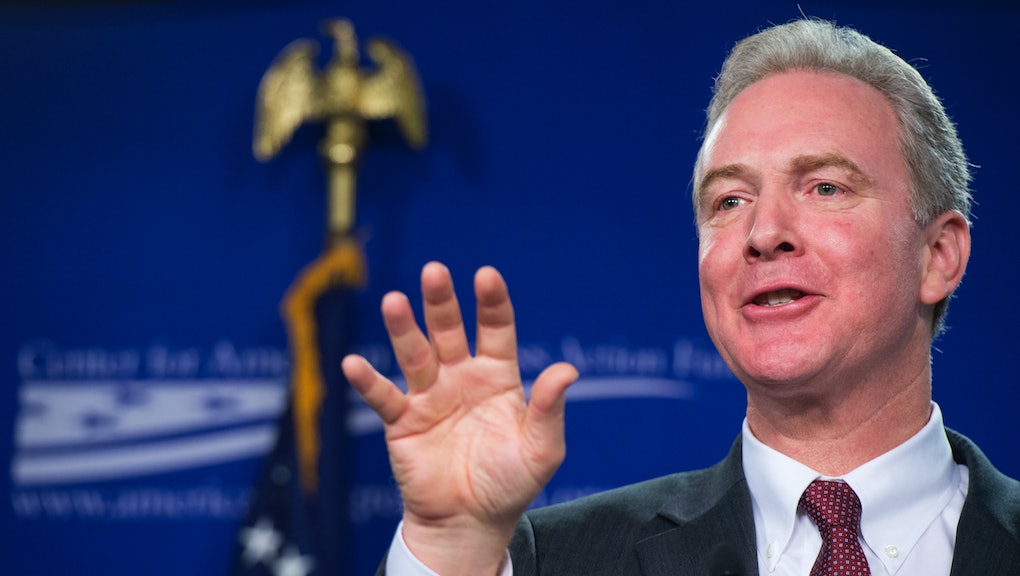 Democrats in the House of Representatives have taken a note from Robin Hood with their new economic playbook.

On Monday, they proposed a plan that would transfer an enormous sum of cash from the wealthiest to the middle class in a move that signals a newly aggressive strain of economic populism for a party desperate for reinvention.

"This is a plan to grow the paychecks of all, not just the wealth of a few. This proposal attacks the chronic problem of stagnant middle-class incomes from both directions. It promotes bigger paychecks and lets workers keep more of what they earn," Chris Van Hollen, the ranking member on the House Budget Committee, said in an announcement of the plan at the Center for American Progress.

The plan is largely symbolic, as Republicans control both chambers of Congress. But it marks a potential turning point in policy and messaging for the Democrats after they failed to galvanize voters with their economic platform for the midterm elections.

The plan: The "action plan" centers on an unapologetically progressive set of tax code changes. According to the Washington Post, the package includes a "paycheck bonus credit" for the middle class — $1,000 for individuals, and $2,000 for couples. It also proposes multiplying the child care tax credit by three, and gives a small boost to people who save at least $500 annually.

The tax breaks, which amount to roughly $1.2 trillion over the next decade, would be paid for through a fee on financial transactions by high-volume traders on Wall Street (which is sometimes called a "Robin Hood tax") and by undoing tax breaks for the top 1% of earners, whose incomes have increased at a far greater pace than the rest of the workforce, as this chart from Van Hollen illustrates:

The Washington Post reports that the plan also takes aim at stagnant wages for workers by offering incentives to companies to provide employees with a share of corporate profits, and proposes preventing companies from deducting executive performance bonuses that are more than $1 million, unless employers raise wages by roughly 4% to match growth in productivity and inflation.

Another chart from Van Hollen's presentation captures how wages have lagged behind advances in productivity for decades:

The plan, which is about a third of the size of the infamous Bush tax cuts, holds no promise of salvation for the ailing American worker, but it's a bold proposal nonetheless. Compared to the one-off $400-per-person credit in Obama's 2009 stimulus package, the paycheck bonus credit is significant. The package's attempt to tie the profits and executives bonuses to employee pay is as important philosophically as it is financially.

House Democrats have no illusions about the feasibility of this becoming legislation that gains traction; Republicans control Congress, and in December the Obama administration reminded the public that it's as friendly with Wall Street as ever when it approved a spending bill provision that was literally written by and for big banks. The White House has also lobbied against a tax on financial transactions in the past on a number of occasions.

Testing the waters: The Democratic leadership's plan is an exercise in positioning, and an experiment with a more unabashedly left-leaning policy platform to see if Sen. Elizabeth Warren's fiery progressive vision is more than just a popular media fad.

But if this is mainly a way of framing debate and expanding the policy window, the plan could be even more ambitious. As the Nation notes, Rep. Keith Ellison, D-Minn., proposed more forceful tax measures in 2013's Inclusive Prosperity Act. As opposed to the Democrats' suggested 0.1% tax on financial transactions, Ellison called for a 0.5% on stock trades, a 0.1% tax rate on bonds and a 0.005% tax rate on derivatives or other investments. Ellison's bill would net roughly triple the amount of money a year (around $300 billion), and act as an even greater bulwark against risky Wall Street speculation.

Despite what the status quo in Washington suggests, this kind of tax scheme isn't controversial, and it has received the endorsement of mainstream economists and business figures across the world. In other words, if you're going to go Robin Hood, you might as well as go all the way.