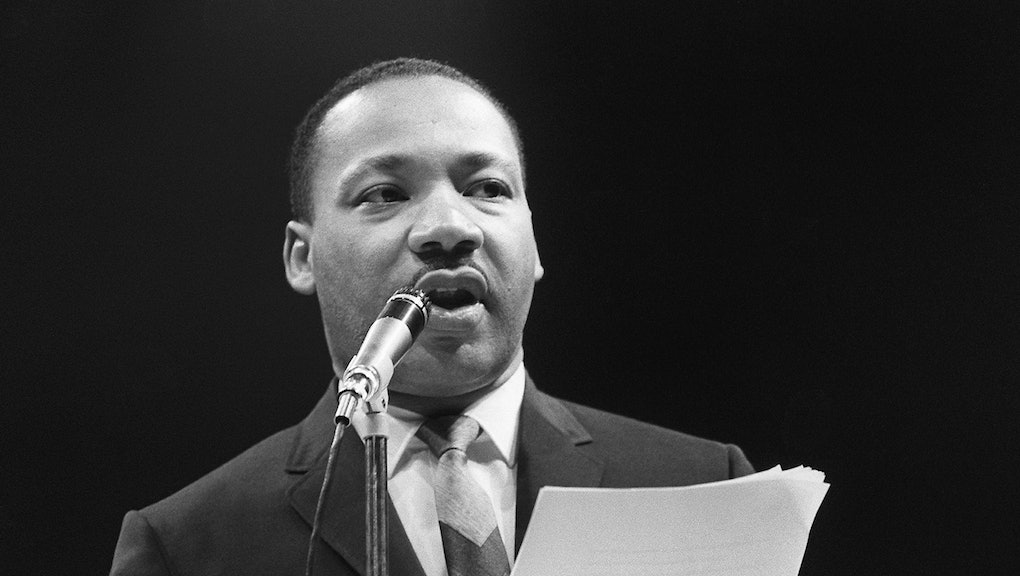 Here's the True Meaning Behind That MLK Quote Everyone Keeps Misusing

There's no denying that Martin Luther King Jr. is one of the most prolific writers and orators in American history. Unfortunately, that comes with a downside: His brilliant words often get distorted, for all the wrong reasons.

Worse, this often happens during contentious political debates on social media — especially those with important racial implications. Sometimes, these errors are the result of cluelessness; other times, it's the work of a  bigot spinning King's famous remarks in an attempt to shame people who care about social justice.

With MLK Day upon us, these misrepresentations and full-blown inaccuracies are here again, too. But there's one quote in particular that is particularly prone to having its meaning repackaged and reinterpreted. As you remember King's legacy today, is important to understand the true meaning of his words, because not understanding them ultimately does more to undermine them than to honor them.

"[Judge not] by the color of their skin, but by the content of their character."

King's words, from his 1963 "I Have a Dream" speech, have been used by people to shun affirmative action, dismiss discussions about white privilege, make claims about "reverse racism" and call for people to "not see race."

But these arguments miss the point entirely. This is not a speech about colorblindness. In the address, King sharply criticized the horrors of anti-black police brutality, "whites only" public accommodations, voting rights denied and discrimination in virtually all areas of life. His words, and his dream, indeed urged Americans to move swiftly on racial justice. But King spent most of his time directly addressing the predominately black crowd at the March on Washington, encouraging people to continue fighting against racism and to "not wallow in the valley of despair."

King couldn't have denounced those injustices without demonstrating an understanding of how skin color created unjust hierarchies fueling white supremacy. Even with a hopeful outlook, his speech emphasized that black people couldn't be satisfied until they no longer faced racial inequities. Not only did King express support of affirmative action as a means of leveling the playing field; his politics were also acutely aware of how race and skin color ultimately create disparities.

Unfortunately, that context gets stripped away when people use King's words to promote some kind of post-racial attitude. Recognizing difference along the lines of race and culture doesn't mean we can't also celebrate and honor the uniqueness of each individual and their experiences. More than 50 years after King's speech, black people still endure multiple disparities based on their skin color.

But this isn't the only example.

When rioting took place around Ferguson, Missouri, soon after the grand jury's decision in the shooting of Michael Brown, many quoted King's philosophy on nonviolence as a stinging rebuke. However, when tragic events in the black community prompted outrage that gave way to riots in the '60s, King took a more nuanced approach.

He said in a speech that, "a riot is a the language of the unheard." His words underscored the fact that one can't condemn riots without also condemning the unjust social conditions precipitating them in the first place. As Ned Resnikoff wrote at Al Jazeera America, "Peaceful demonstrations — sometimes in the face of violent policing and provocation — were certainly a key feature of the civil rights era."

Then there's King's words on civil disobedience in the context of anti-racism, which are often misaligned to undermine reproductive rights and LGBT equality.

In King's 1963 "Letter From a Birmingham Jail," he noted: "[One] has a moral responsibility to disobey unjust laws." The letter went beyond a blistering critique of white liberals and moderates who remained inactive on racial inequities. While railing against Jim Crow laws that enshrined segregation and discrimination against blacks and people of color, King highlighted that Hitler's actions in Nazi Germany were legal, despite being morally reprehensible.

That context has been largely removed in the years since — and for political positions King likely wouldn't have been pleased with, given his track record. For example, during the 2014 March for Marriage, former Arkansas Gov. Mike Huckabee read from the letter, using King's words to draw comparisons between same-sex marriage and the Holocaust. Although his widow, Coretta Scott King, expressed support for the cause, King reportedly never publicly condemned people who aren't heterosexual. Others have used King's letter to rail against abortion, with some anti-abortion activists going further to claim King would've sided with them.

King's legendary quotes shouldn't be used to espouse bigotry of any kind, nor should they be repurposed to undermine racial justice efforts. When King isn't present to bear witness to ongoing political battles, it's disingenuous to erase the context behind his words. Instead, it's up to each person to not only recognize history, but also educate themselves so that they can contribute unique thoughts to the conversation.

Stomping on the legacy of Martin Luther King Jr. helps no one's cause.