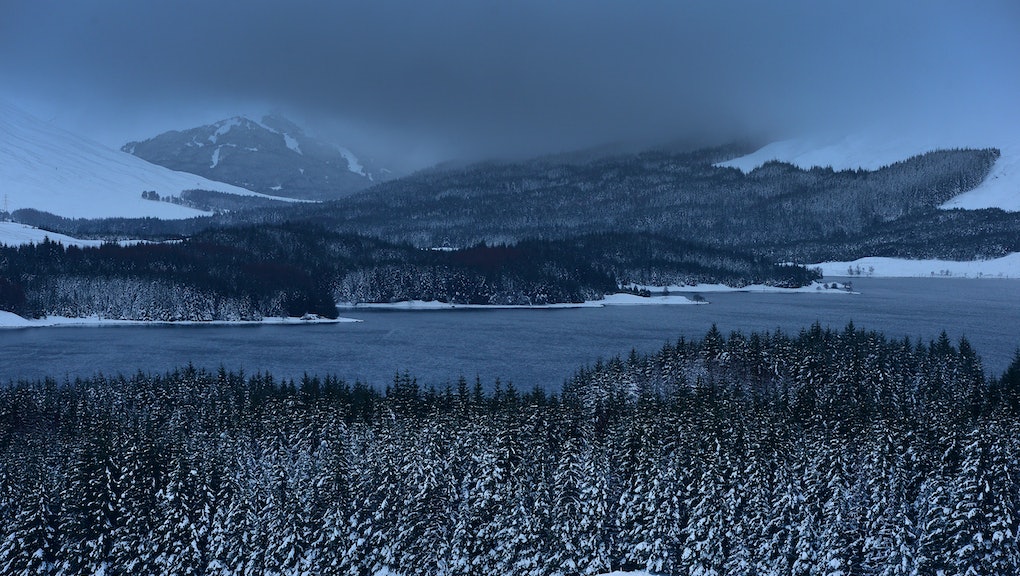 A lot of big names competed for this year's Mercury Prize, the biggest music award in the U.K. Damon Albarn, of Blur and Gorillaz fame, was one of its frontrunners, alongside indie staple Bombay Bicycle Club and FKA Twigs, the heavily favored Pitchfork darling.

People were surprised, then, when a little-known Scottish hip-hop group called Young Fathers took home the prize for Dead. The album was a major underdog, so the win took the industry by surprise. The music was nearly unclassifiable — equal parts subversive and catchy — but the group has introduced the world to something few knew existed: the booming Scottish hip-hop scene.

It's somewhat surprising to the outsider, but Scotland is home to a cavalcade of incredible hip-hop artists operating just out of sight of the rest of the music world. Young Fathers' Mercury Prize win is the biggest look that scene has received. It may be the catalyst that launches the music into of the ears of a much wider audience — and that's a great thing for hip-hop.

Young Fathers exemplify the best aspects of Scottish hip-hop. "To win is the icing on the cake. But awards and stuff like that, they're not telling us anything that we don't already know," Graham "G" Hastings of the group told the Guardian. They know their music's potent — they've just been waiting for the world to realize.

But it's taken the world a while to catch up. Scotland isn't where you look for hip-hop. But Young Fathers exemplify the scene's most distinct qualities, even though they sound the least overtly Scottish in the genre (they sing in accents closer to Nigerian and Liberian). Their songs are true to the founding maxims of hip-hop, always seeking to tackle the most pressing cultural issues of the day. That's one of the reasons they've stayed hidden for so long. As the Scotsman points out, their political lyrics, such as "AK-47 take my brethren straight to heaven" from "No Way," have prevented their songs from getting much radio play.

That intense political focus is what makes them the perfect ambassadors for Scottish hip-hop: They won't compromise on their national voice, but nonetheless, the group's end goal is to be "everywhere," like the pop industry's most beloved darlings. To do so, they plan to remake some of the industry's standards in their own image by finding the balance between catchy and political. Listening to Dead, it's clear they're well on their way. And they're bringing a huge scene with them.

Scotland is packed with hip-hop groups looking to make waves with an alternative to mainstream hip-hop's emptiness. It's been slow-going, though, in part because most of Scotland's rising talent spits with a much heavier Scottish accent, something that has long made their music somewhat inaccessible to hip-hop audiences outside the country.

"You can't tell stories and have any honesty in them if you're not telling them in your own voice," says rapper Dave Hook from the band Stanley Odd. "That starts with getting comfortable in your own accent, and that's much harder to do in rap than it is in song."

The accents and native slang make Scottish hip-hop intensely focused on national issues. Stanley Odd's "Son, I Voted Yes" from 2014, which relates the complex history and politics behind Scottish referendum, is a classic example of how Scottish hip-hop is becoming a modern record of its history.

But the accents aren't the only unique thing about the groups. Like a growing number of Scottish hip-hop bands, Stanley Odd features live instrumentation, which is rarer in stateside hip-hop. Hector Bizerk's music also relies on live drums and features the same high levels of political consciousness. In America, it would be called "conscious rap," but Scottish rappers don't like the label. As the group's rapper Louie told the Skinny, "If you're not talking about things that matter, then what are you talking about? You're just talking shit, really."

That deeply engrained consciousness is what makes Scottish rap so vital. Battle-rapper Loki believes one of the greatest strengths about Scottish hip-hop is that its biggest artists all have deep engagement with politics. "Political artists are dominating," he told MTV Iggy, "It wasn't always like this. But it seems the community is coming of age, and now there is a little more space to make more politically charged art." He's played a big role in bringing this to the fore, frequently as a community activist and political pundit in addition to his MC duties.

That intensely national focus is why it could reach a broader audience. With its heavy focus on politics, Scottish hip-hop is staying true to hip-hop's roots as being first and foremost a socio-political movement. The same hasn't exactly happened here in the U.S. as American hip-hop has "come of age." Most of America's biggest talents have sacrificed the genre's revolutionary edge to make their names. Q-Tip recently had to give Iggy Azalea a history lesson on Twitter to remind her that hip-hop's essential purpose is to combat oppression and give a voice for the voiceless.

American hip-hop may be heading down a path toward sanitization and safety, tempted by the allures of the top 40 charts. But curated by the able voices above, Scotland's hip-hop remains urgent. Its members discuss their trials in their native tongues, instead of co-opting others' accents and stories, like some we know.

If Scottish hip-hop keeps its heavy political slant and accents, it may forever remain less accessible than the American standard, but consequently it also may remain an expressive and vital art form for Scotland's people far longer than ours will. That's why it should matter to us all.