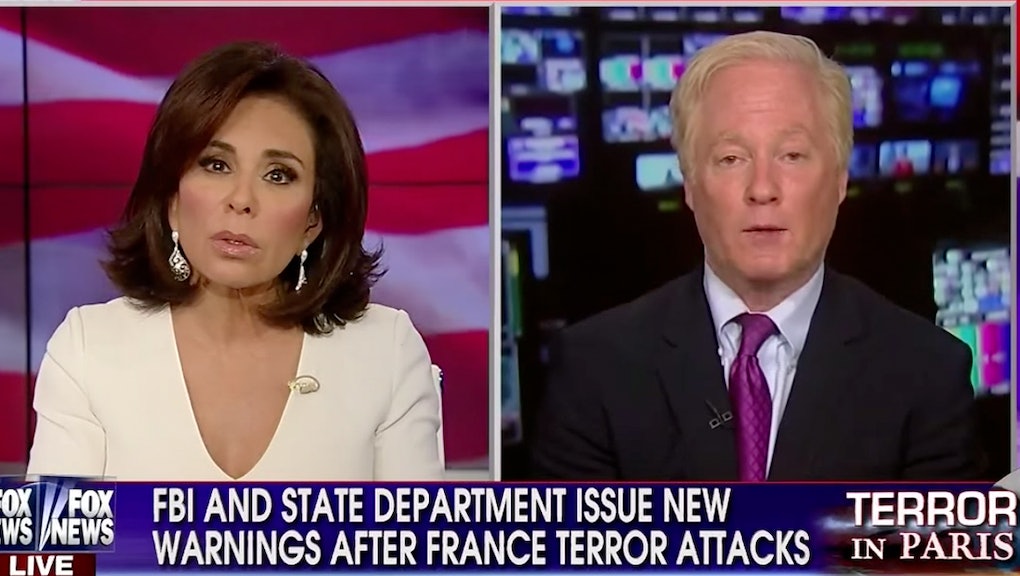 After launching into a tirade about Muslim communities in Europe, Emerson — who has appeared before Congress multiple times and is the founder of the Investigate Project on Terrorism — fired off this gem:

"There are actual cities, like Birmingham [one of the most populous cities in the United Kingdom], that are totally Muslim, where non-Muslims just simply don't go in. And parts of London, there are actually Muslim religious police that actually beat and actually wound, seriously, anyone who doesn't dress according to religious Muslim attire."

"There's a situation that Western Europe is not dealing with!" he finally yelped, referring to the problem of Muslims overrunning the entire country. Well, maybe they're not dealing with the situation because it doesn't exist. A simple Google search confirms this, if his claims weren't inane enough by themselves.

Unsurprisingly, Emerson was immediately eviscerated by more or less everyone. British Prime Minister David Cameron told ITV News that he "choked on [his] porridge" after hearing the remarks, adding, "I thought it must be April Fool's Day. This guy's clearly a complete idiot."

The Birmingham City Council said the "curious" assertions were baseless, while Gisela Stuart, member of Parliament for Birmingham Edgbaston, summed up the comments as "stupid."

The best reactions, however, came in the form of a hashtag created by Guardian journalist Simon Ricketts. #FoxNewsFacts began trending soon after Emerson's appearance, and they're exactly what they sound like: satirical and blatantly incorrect statements, largely about the Muslim community, that sound like they could appear on Fox News.

The tweets might be hilarious, but they go a little deeper, too. It's easy to bash Fox News outright for giving stupid comments a platform (see: here, here and here), but #FoxNewsFacts goes one step further and adds perfect, snarky humor into that mix.

It has also provided some evidence that not everyone will be swayed into believing Islamophobic rhetoric, despite the network's best attempts at making that happen. In fact, the massive shitstorm prompted by Emerson's appearance caused the expert himself to backpeddle; as the BBC reports, he admitted that the comments were a "terrible error."

Ricketts summed it up best: "I thought it might be funny to counteract the anger with silliness, so I wrote a tweet and stuck the hashtag (#FoxNewsFacts) on it," he told the BBC. "Sometimes the best response to such nonsense is satire and mockery, rather than anger and outrage."