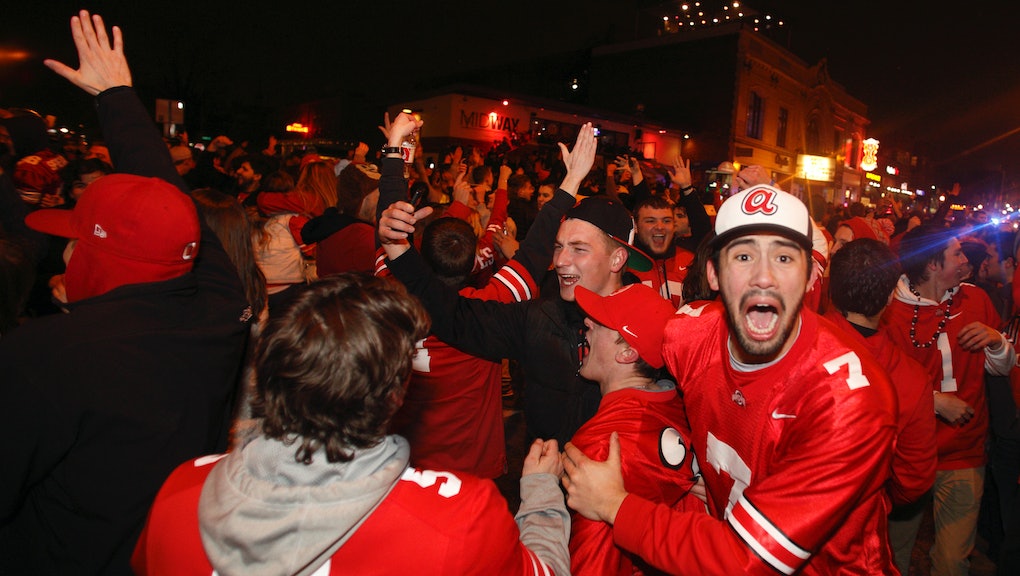 These are some of the words the mainstream media used to describe the thousands of people who flooded the streets of Columbus, Ohio, last night, lighting 89 fires, vandalizing property and requiring the deployment of riot police after the Ohio State Buckeyes' football team won the National Championship.

The rhetoric is particularly striking given the responses of media outlets to past events. For instance, five months earlier a police officer in Ferguson, Missouri, killed an unarmed teenager. Residents of that city, which is 67% black, took to the streets in protest, demanding accountability from a law enforcement apparatus that had disproportionately targeted them for years. One fire was lit, burning down a convenience store. Yet the media referred to the events in Ferguson as "riots," and their participants as "rioters." Meanwhile, the broader conversation around the incident shifted toward shaming these people, dismissing them as "thugs" and "savages" and criticizing them for "destroying their own communities."

One tweet from radio host Brian Joyce sums up the hypocrisy of these opposing characterizations:

The difference illustrates a big problem in American society: Our framing of black unrest is markedly different from how we frame white unrest.

White people who riot tend to be described (and treated by law enforcement) as nuisances and mischief-makers, harmless until proven otherwise, and generally receive the benefit of having their actions justified and contextualized from the outset. These scenes are repeated time after time after time, particularly on college campuses and in the aftermath of sporting events.

Is there something inherently mischievous about sports fans, but not social justice advocates? The difference in language stretches all the way to individual autonomy. Black people in Ferguson rarely get described as "students," "entrepreneurs" or any descriptor that frames them as anything but a monolithic black "whole."

And it follows that black people who vandalize or destroy property are treated as dangerous savages, whose actions tear at the fabric of acceptable behavior.

The difference is partly rooted in racial stereotypes, which frame black people as naturally threatening. Columbus is 62% white, while Ohio State University has an 82% white student body. Police officers used tear gas and pepper spray to disperse last night's crowds, but only 6-7 arrests were reported (which is remarkable, considering the number of arsons).

If this had been a black majority, can we honestly say the rampant fires, stadium break-in and goal post destruction would be have been treated as celebratory revelry? It's unlikely, based on what we've seen this past year. Welcome to post-racial America.

(Article updated Jan. 14 to reflect new data released by the Columbus Police Dept. on the number of arrests made.)