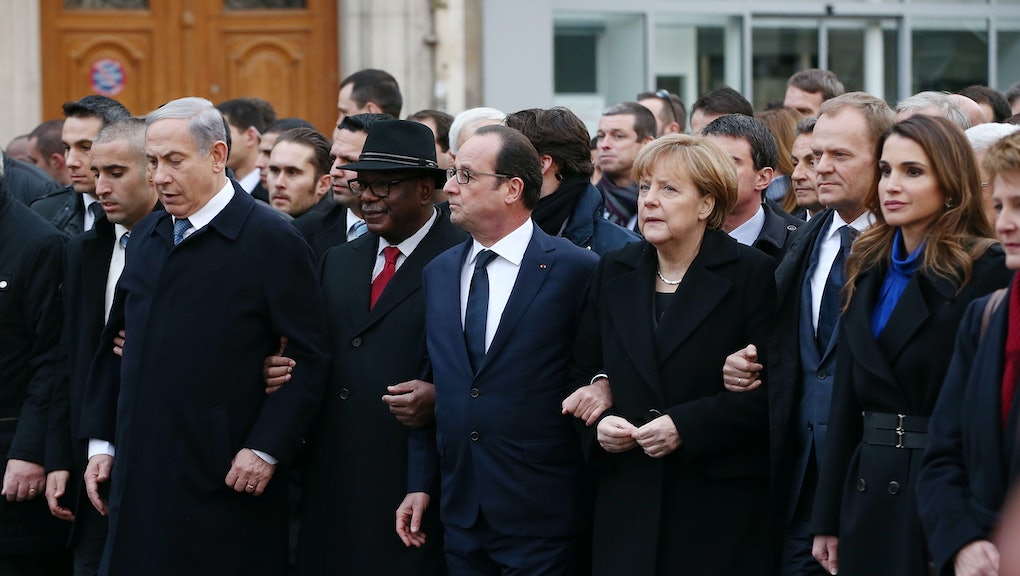 A crisis is a terrible thing to waste.

Following last week's deadly attack on satirical French newspaper Charlie Hebdo and subsequent hostage situations, which left 17 people dead, millions of people around the world have rallied in support of freedom of expression. But just days after nearly 40 world leaders marched through the streets of Paris in defense of free speech and against religious extremism, politicians are using the attack by Islamic terrorists to rally for a very different cause: the escalation of online surveillance.

Since the attacks, leaders from the United States, the European Union, Italy, France and England have already issued statements hinting at plans to overhaul intelligence laws.

Following the Edward Snowden leaks last year, Americans have been increasingly concerned about privacy. According to a November survey by the Pew Research Center, 80% of adults "agree" or "strongly agree" that Americans should be concerned about the government's monitoring of phone calls and internet communications. In response, Congress has made a bipartisan effort to limit the reach of both the NSA and the CIA in domestic intelligence gathering.

However, almost immediately after the Paris attacks, notoriously conservative Republicans quickly seized the attacks as validation for the NSA's oft-criticized tactics. The National Journal reports that senators including Chuck Grassley (R-Iowa), Bob Corker (R-Tenn.) and Lindsey Graham (R-S.C.) see the attacks as justification for the agency's powers, and as an indicator that it should be given the resources to ramp up that power.

"To me, Congress having oversight certainly is important, but what is more important relative to these types of events is ensuring we don't overly hamstring the NSA's ability to collect this kind of information in advance and keep these kinds of activities from occurring," Corker, chairman of the Senate Committee on Foreign Relations, told National Journal.

Graham offered a similar analysis, saying, "We must use this horrific attack as an opportunity to reevaluate our own national security posture. I fear our intelligence capabilities, those designed to prevent such an attack from taking place on our shores, are quickly eroding."

After initial hesitation to formalize further measures against terrorism, French Prime Minister François Hollande announced new security measures to the French National Assembly on Tuesday, the Associated Press reports. The plans include the increased monitoring of both the travel of suspected radicals, as well as the closer monitoring of communications and the Internet for signs of extremism.

"The fight against terrorism requires vigilance every inch of the way," Valls said. "We must be able to constantly know who the terrorists are, where they live and what they are planning to do."

Such limitations on freedom of speech aren't necessarily anything new in France, however, which many foreign observers have been quick to point out post-Hebdo attacks. Freedom of speech is already limited in France — particularly unpopular speech that "defames or incites hatred, discrimination or violence on the basis of religion, race, ethnicity, nationality, disability, sex or sexual orientation."

U.K. Prime Minister David Cameron has delivered perhaps had the most direct and aggressive response to the attacks — and the most explicit threat to freedom of expression and privacy on the Internet. If he is once again elected to be prime minister, Cameron has vowed to pass legislation that would make it easier for authorities to access users' online content and activity.

According to the Guardian, Cameron told ITV News, "I have a very simple approach to this issue which is that ever since we faced these terrorist threats it has always been possible, in extremis, with the signature of a warrant from the home secretary to intercept your communications, my communications, or anyone else, if there is a threat of terrorism."

While Cameron did acknowledge that that granting such authority could prove to be "extremely intrusive," he says he still sees the attacks as enough of a case for why such surveillance was "appropriate in a 'modern liberal democracy."

The EU's response to the attacks similarly hints at increasing surveillance online. The union's suggested solution to preventing attacks like the Charlie Hebdo shootings in the future: increased censorship of content on the Internet to "ensure that the Internet is not abused to this end," according to a joint statement released Sunday by EU leaders.

The leaders outlined a step-by-step plan to combat increased terrorist threats, particularly noting their concern about the Internet's potential to fuel such activity:

"We are concerned at the increasingly frequent use of the Internet to fuel hatred and violence and signal our determination to ensure that the Internet is not abused to this end, while safeguarding that it remains, in scrupulous observance of fundamental freedoms, a forum for free expression, in full respect of the law. With this in mind, the partnership of the major Internet providers is essential to create the conditions of a swift reporting of material that aims to incite hatred and terror and the condition of its removing, where appropriate/possible."

Italy's Interior Minister Angelino Alfano echoed the EU's statement, saying that the Italian government fully intends to go after those using the Internet to "spread their radical message," Ansa Cronaca reports. Following the Hebdo attack, Italy acknowledged that it was aware of one of the suspects and announced plans to strengthen their anti-terrorist efforts.

Alfano vowed that, in the future, they would "cooperate with efforts to 'detect messages online that contribute to radicalisation'" and also said that "providers would be 'banned under threat of criminal prosecution from accepting web sites that agitate for terrorist behaviour."

So what's going to happen?

Although these politicians' plans aim to seriously disrupt Internet privacy across the globe, that doesn't necessarily mean that they're not giving the people what they want. People are more likely to push for increased  surveillance, online and otherwise, after terrorist attacks due to heightened anxiety regarding security concerns and an increased demand for adequate protection and awareness.

For example, after the Boston Marathon bombing, public support for the use of security cameras greatly increased when the cameras proved to be key in helping police capture the suspects. Following the 2013 attacks, a poll by the New York Times found that Americans concern over future attacks surpassed their concern for civil liberties, and that "Americans are willing to tolerate further tough measures to foil future attacks."

However, maintaining a healthy balance between freedom of expression and monitoring of dangerous and possibly terroristic activity is a difficult one to achieve, as evidenced by the politicians' statements and plans. Right now the EU is facing the same conundrum that the U.S. faced after 9/11 and that every country faces after a major crisis: whether to sacrifice privacy in the name of protection.

While approval of counterterror measures that overstep traditional boundaries of personal privacy typically spikes following major terrorist incidents — just think of the rubber-stamp passage of the PATRIOT Act by Congress after 9/11 — ramping up surveillance of civilians is an overreach that potentially erodes the civil liberties central to a democratic society, potentially turning liberté-loving France into the kind of totalitarian state that theocratic extremists hope to live in.