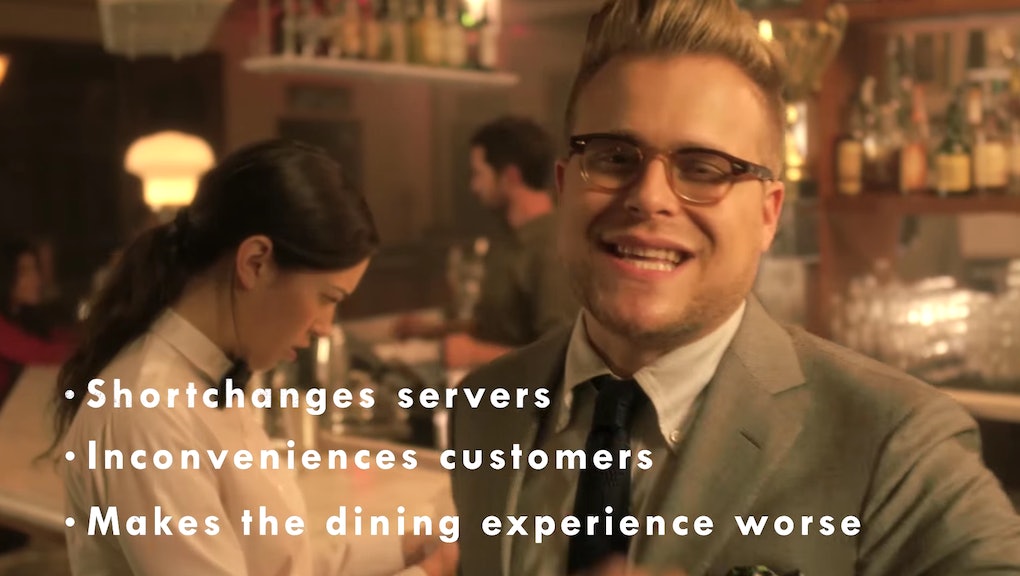 One Hilarious Video Definitively Explains Why It's Time to Ban Tipping

Should tipping go the way of butlers, cassette players and the dodo?

CollegeHumor's Adam Conover thinks so. He's laid the case that tipping is archaic, unfair and unnecessary pretty effectively in this newly released and exceptionally hilarious video titled "Why Tipping Should Be Banned." Take a look:

Here's a couple of the biggest takeaways from Conover's video, broken-down and fact-checked:

On these three quick points, Conover is right.

1. Servers work in an industry where their income can vary dramatically every night, resulting in situations where they can work entire shifts and go home with much less than minimum wage. HuffPo's Hunter Stuart notes that both servers' income and tipping rates are declining over time. Today, servers are three times as likely as other employees to live in poverty and are often forced to rely on government benefit programs to get by. As the Boston Globe notes, this often gives restaurant managers positions of power over their employees that simply wouldn't be tolerated in other industries.

2. Anyone who's ever tried to split a check at a restaurant between a big group of diners knows that tipping makes a bad situation worse. It is, by definition, inconvenient. (No wonder apps exist to do it for you.)

3. Restaurant owner Jay Porter writes that abolishing tipping and moving to service charges improved his restaurant's food, made operations more efficient and increased employee morale, in large part because his staff wasn't "interrupted every hour or so with a trickle of payment that was supposedly based on how well were perceived to have done a recent task."

No other industries rely on tipping.

This one's a little iffy, considering that hospitality staff and taxi drivers, among others, are supposed to be tipped. But Conover is right to point out that in general, people you interact with are paid on the basis of their productive labor rather than the whims and mercy of their customers. Furthermore, one could argue restaurant servers rely much more heavily on their tips than other such workers.

As Porter points out, the main reason many people are opposed to eliminating tipping is because it removes "their perceived power over their server." It's hard to see that logic of control and punishment being tolerated towards low-wage workers in any other industry.

American tipping originated as a way to screw over employees.

This has a basis in fact. As Conover states and Jezebel's C.A. Pinkham confirms, American tipping originated as a way to shore up profits during Prohibition, when legitimate restaurants lost one of their most lucrative sources of income. In 1916, writer William Scott wrote that the the prevailing opinion of the times was that "to be servile is incompatible with citizenship." Until restauranteurs attempted to offload the costs of Prohibition to their employees, Americans rightfully viewed tipping as insulting and aristocratic.

The federal minimum wage was adjusted in 1966 to allow restaurant employees to make only half the prevailing wage for other workers. Then, in 1991, the minimum wage for tipped employees was set at a paltry $2.13 an hour, and it hasn't budged since. Pinkham notes that the National Restaurant Association (which leans heavily Republican) was a key backer of lower wages for tipped employees. Today's restauranteurs are continuing the proud tradition of shilling their staff, relying on people who "can't bring themselves to care about those they see as beneath them" to keep the system in place.

There's no connection between service quality and the size of the tip.

Americans tend to rationalize away the tipping system by arguing it's meritocratic: The best servers get the biggest tips, and poor workers are penalized for providing lesser quality of service. Just ask Yahoo! Finance's Rick Newman, who argues that tipping "creates an incentive to be entrepreneurial" and "gives customers more control."

Putting aside these paternalistic assumptions, the important thing to remember is that tipping doesn't actually work that way. The Guardian reports:

... waiters see only a teeny, tiny bump in tips when they do an exceptional job compared to a mediocre one (one estimate puts the variation at a 2% difference). Patrons actually vary their tips for less palatable reasons, like their server's race, gender and body language. Waiters, wily observers of humanity that they are, are catching on to this; in one poll, a full 30% said they didn't believe the job they did had any impact on the tips they received.

By the way, other research has indicated that tipping has much less to do with the quality of service than the kind of person you are. As many as 35% of people tip 10% or less, while a full 11% tip nothing. The tipping system relies on exploiting some peoples' goodwill to make up for others' willingness to stiff servers.

If you don't tip, you're an asshole.

Yes, tipping may be paternalistic, unjust and the result of deliberate efforts by miserly owners to pay their staff as little out of pocket as possible. But until that changes, servers are relying on the politeness of strangers to make ends meet. If you don't tip, the only statement you're making is that you don't care about the welfare of others.

Most recommend 15-20% minimum for restaurant service, before taxes, and only ordering what you can afford to tip on. Come one, don't be that guy.