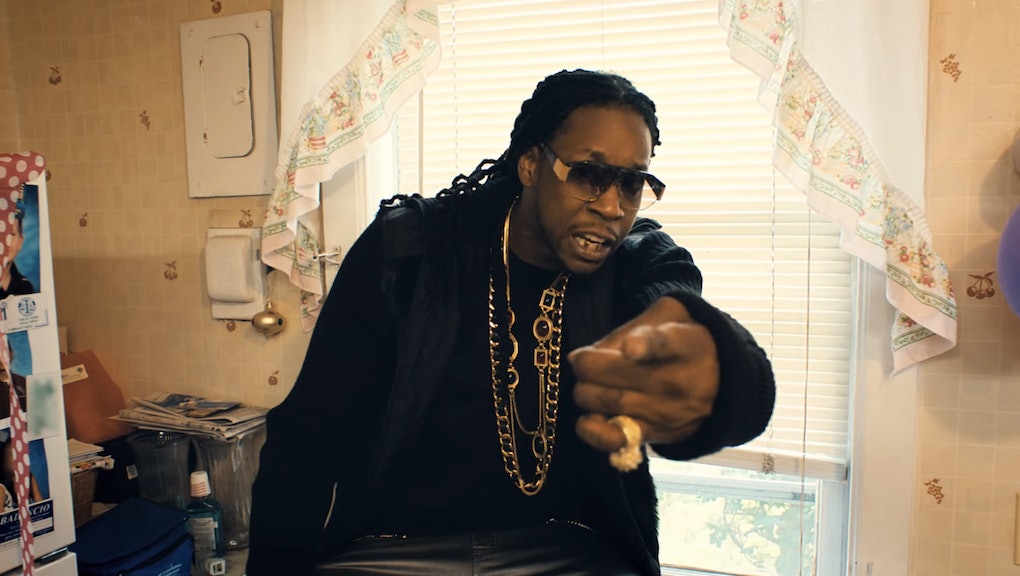 Rapper 2 Chainz, aka Tity Boi, aka Tauheed Epps, may have seemed like an easy target for cable television host and general hysteria-monger Nancy Grace. But when she tried to slam him for supporting marijuana legalization, he wouldn't stand for it.

In just a quick nine minutes, a calm and composed 2 Chainz makes Grace and her racialized advocacy for marijuana criminalization look completely ridiculous:

In the video, Grace pushes a biased view of the drug and its purported "evils," giving simplistic and generalized moral arguments. Marijuana criminalization is inherently a racial issue, and Grace's attempt to stereotype 2 Chainz and his art form as a way discredit his character only plays into that vicious cycle.

Showing a video of his "Birthday Song," she asks, "Why do all the guys have on regular clothes and all the women have on skin-tight leopard suits? You know, I don't have the answer to that." And later, even more absurdly: "While I have you, why the two chains?" She tries numerous times to discredit his arguments by falling back on his rap persona and her stereotyped perceptions of rap, arguing about negligent parents and actually begging him to "think of the children!"

But 2 Chainz keeps his cool. He explains himself, his legalization stance and his art thoroughly and thoughtfully. His arguments match hard data coming out of states where the drug has already been legalized, all of which shows that marijuana legalization does not destroy communities and families the way that Grace claims it has. He cites wasted tax dollars as a reason why legalization is necessary, an argument that Grace claims not to understand at all.

But he's exactly right: Needless marijuana enforcement wastes billions of taxpayer dollars every year. This is one of the most basic arguments for legalization, and it makes perfect sense. He then points out that Grace's attempt to pin her position on a few incendiary videos of high parents being negligent is senseless. "You can't use this case to define an entire community," he says.

In short, he completely shuts her down.

Yet there's a deeper problem here. Grace, unwittingly, showed that the arguments for criminalization are inherently racialized. She chose 2 Chainz over any of the many white proponents for legalization so she could mock his rap videos as somehow emblematic of a culture. While there are some videos of white kids smoking weed in the segment, most of the shots of smokers are black.

Marijuana enforcement does actually affect communities of color far more than white communities. Whites and blacks use marijuana to "roughly the same degree," according to the New York Times, but black men are "3.7 times more likely than whites to be arrested for possession." This has, according to Vanita Gupta for CNN, "reinforced generations of poverty and disadvantage that disproportionately fall on communities of color."

That's exactly the kind of emotional appeal Grace was making. But 2 Chainz definitely won this one. He kept his cool and argued with hard facts. Grace, fittingly, has become a laughingstock on Twitter, with some calling the interview the greatest moment in cable news history.