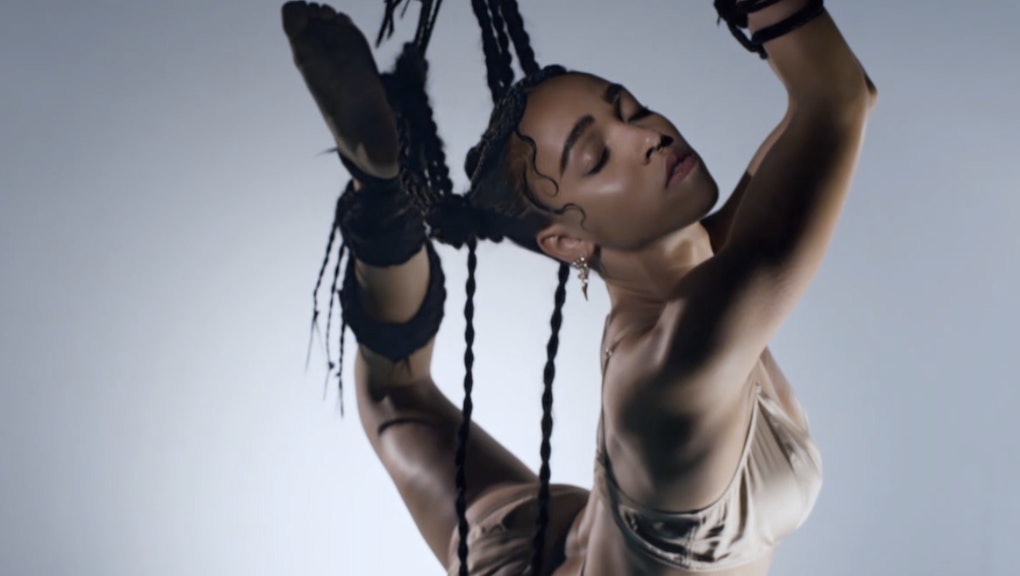 FKA Twigs Just Released a Self-Directed Video — And It's Groundbreaking

FKA Twigs is many things: singer, writer, dancer, producer and director. There's nothing she can't do. Still, nobody was expecting the video she released Wednesday morning. Her self-directed video for "Pendulum" proves she's one of the most important artists we have.

But there's an even deeper significance here: With the new video, she's doing more than promoting her music — she's taking a stand against the rampant sexism in many popular male-directed music videos. She's showing just how popular it is when women take charge of their own presentation.

Twigs' popularity has been growing since she first appeared solo on the scene in late 2012. Last summer, Twigs released her debut LP1 to rave reviews and has since been touted as one of the hottest acts in music. While she's rightfully been commended for her bold videos, few people truly recognize the significance of her work. In an industry where some of the worst stereotypes about women are perpetuated by music videos filmed by men — and where those videos are proven to encourage sexist attitudes in viewers — Twigs is claiming agency by making brilliant self-directed videos. "Pendulum" is an epic display of physical derring: It's mostly a dance routine that flirts with images of bondage and Twigs' striking display of her own vulnerability.

It's a bold step in the right direction in an era of brainless, NSFW music videos that focus solely on objectifying women. Look no further than the videos that have led the media to call 2014 "year of the booty." Across many immensely popular male-directed videos, women are atomized into a collection of body parts.

Take Jason Derulo's "Wiggle" and Nicki Minaj's "Anaconda," for instance. Both were directed by the same man, Colin Tilley, who has worked with Chris Brown, Justin Bieber and Lil Wayne, artists who are noted proponents of this objectifying stance on sexual politics and the 'mass of asses and tits' approach to music videos. The male gaze is rampant in popular music videos, but by taking the reigns behind the camera, Twigs takes control of her art and her body.

Somebody has to do it — and Twigs knows that better than anyone.

Twigs has been on the other side too. She's aware of the power of images in music videos — it's haunted her before. Prior to starting her career as a musician, Twigs was a back-up dancer. She appeared in music videos with pop stars like Ed Sheeran, Kylie Minogue and Jessie J. In Jessie J's "Price Tag," which was directed by the man behind Jennifer Lopez's ridiculous "Booty," Twigs was tied up and powdered like a helpless marionette. For years, she was recognized as "that girl from the video," and it was an early mission of her solo career to shake that image of helplessness — of being an object in the background.

This time, though, Twigs is in charge. In the process, she's managed not only to shake that image but also do something unlike anything that's been seen or heard before. Twigs' music is sparse and quiet, her delicate voice floating above the churning production. Her music videos, which she's self-directed before, are visually captivating but the true movement is in the subtleties. In "Pendulum," Twigs is tied up again, but this time it's different: Twigs is tied up by herself — by her own hair. And it isn't her body that's on display, it's her vulnerability.

Some media outlets are calling the video "sexy," referring to Twigs chiefly as Robert Pattinson's girlfriend. But that misses the point. Twigs' video is a quiet revolution. It's a reminder that sexuality doesn't have to be sexualized — that when women own their own voices, they can sing amazing things.